Amitabh Bachchan Reveals His Body Is Giving Signals To Slow Down, Posts Picture From Hospital Bed

Amitabh Bachchan Reveals His Body Is Giving Signals To Slow Down, Posts Picture From Hospital Bed

Amitabh Bachchan, in one of his recent blog posts, posted a picture from hospital with a giant TV, screening a football match in front of him. He shared a thought which put everyone in deep concern. Rishte Mein Toh Hum Tumhare Baap Lagte Hai, Naam Hai Shahenshah- Only Bollywood fanatics can understand the true essence of this one-liner from Amitabh Bachchan, which bestowed him with the ‘Angry Young Man’ title in the Hindi film industry. Bollywood boasts of having legends work for its betterment, and Amitabh Bachchan is one such actor with whom, all have their emotions involved. The megastar, who recently completed 50 glorious years in the film industry, recently suffered from bouts of ill health which had made the nation skip their heartbeats. (Do Read: Sakshi Tanwar Feels Daughter, Dityaa Is The Answer To All Her Prayers, Gave New Meaning To Her Life)

But we all had heaved a sigh of relief when Amitabh Bachchan was discharged from the Nanavati hospital in Mumbai on October 18, 2019, after a three-day stay. He is now back home all hale and hearty and was spotted by the paparazzi, as he came out of the hospital accompanied by son, Abhishek Bachchan and wife, Jaya Bachchan. Here’s a glimpse:

In the world of social media, Amitabh Bachchan, apart from Twitter and Instagram, is an active blogger and writes phenomenally well. The topics constitute anecdotes or his thoughts and views on life and like. Amitabh ji, in one of his recent blog posts, posted a picture from hospital with a giant TV, screening a football match in front of him. He shared a thought which put everyone in deep concern. The same could be read as “Spare times in the bank... lying around, skipping time to go by in rapid form... and reminiscing the work front by the day after... when there shall be the chair and the computer ji and the audience.” 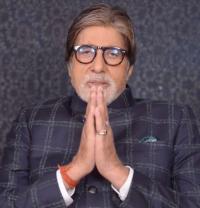 Amitabh Bachchan’s blog post further continued as he shared with all that his body has been giving him signals to slow down, “But first the leftovers of incidents from the times of DON and the cracks and breaks now playing up... and placing themselves in important avenues which restrict movement... at times of this it may be of interest too... to the body, but not the mind .. so one listens to the body .. and many shall there be who will applaud and commit to say... “ Did we not tell you this to slow down” Slow down...? That's what you tell the vehicle or the train on road and track... so... what.” 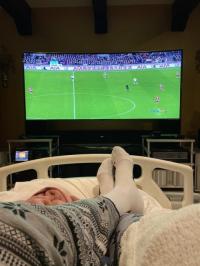 Soon after Amitabh Bachchan was discharged from the hospital, the legendary actor, who is an active blogger, had penned a blog post on the night of October 18-19, 2019, which had spoken volumes about having tonnes of gratitude. While we will share more details of the same in the later paragraphs to come, Amitabh ji, in the later parts of his blogpost, had posted an endearing set of pictures of some cuddle moments with granddaughter, Aaradhya Bachchan. He had written the words, “The embrace from the little one and nothing else matters .. it sublimes itself to that which is beyond the description of my language”, beneath the pictures. P.S., it was one of the very pictures that Aishwarya Rai Bachchan had used to wish Amitabh ji on Aaradhya’s behalf on his birthday. (Must Read: Sushmita Sen's Daughter, Alisah Sen Writes An Essay On Adoption, Leaving Everyone Teary-Eyed)

Amitabh Bachchan had turned 77 on October 11, 2019, and quite like every year, a vast array of fans had stood outside his house, some decked up as the legend himself, to thank him for being born. Amitabh ji through his blog post, had expressed his heartfelt gratitude to all his fans. The same was worded as “Prayers concern and the love of them that stand by you, are elements of immense construct .. they believe so you believe .. they present folded appeal, and the reciprocation be of equal strength .. they are real .. they are constant .. they are the energy often questioned.” 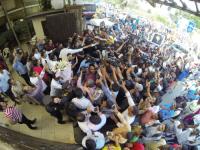 Amitabh Bachchan’s blog post had begun with vast examples related to the term ‘removal’ which probably reflected his current mindstate. His beginning words can be read as “Removal .. an incendiary… remove an association… remove an object of desire… remove from environ of approval… remove away from a link… remove distaste… remove distraction… remove the ugly… remove the pain… and remove all that measures parameters… and the dousing of the incendiary occurs… and in the biding of them that devoted time and care, of secure presence, of studied advice and guidance… sailing into the flashes of pap inflammation and to the smiles and relief of laughter at the domestic terminal… brings us to that changed address above.” 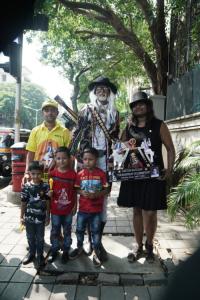 Further providing stringent guideline to the fact that a person’s medical ailments fall under every body’s right to privacy, Amitabh Bachchan had written, “Do NOT break the CODE of professional documentation .. ailments and medical conditions are a confidential individual right .. its exploitation, and its attempted commerce are a social illegality .. respect and give required understanding to this .. all is not in the world of sale. My love .. and my gratitude for all .. for all that consider care, that consider concern and consider prayer for me.” (Also Read: 'Ace Of Space 2' Star Baseer Ali Gets Dumped For The First Time By His In-House GF, Lucinda Nicholas) 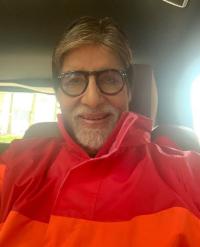 Amitabh ji, we are sure that you are recuperating well. Here’s sending our best wishes to you!