It was on January 14, 2020, when the nation had woken up to the sad news of Ritu Nanda’s death. On January 20, 2020, Amitabh Bachchan pays tribute to his Ritu 'ji' with an emotional speech. 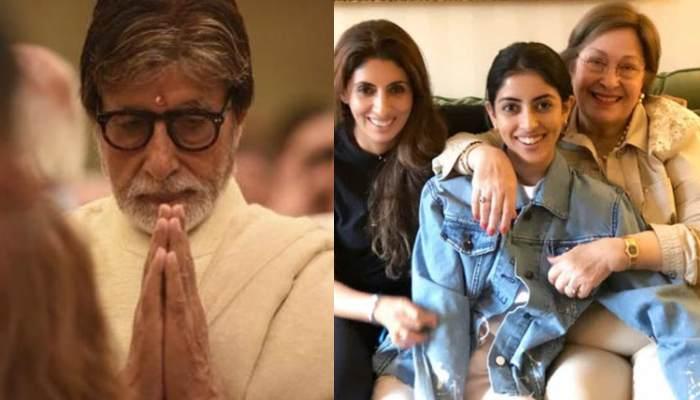 It is very strange how we make plans for the future and make resolutions when we know how uncertain life is. Life is all about cherishing each and every moment because the memories we make with our loved ones are the only things that last forever. From the first breath to the last breath, it doesn’t matter how many years you lived, what matters is how many lives you touched, the lovely memories you left behind. On January 14, 2020, the nation had woken up to the sad news of Ritu Nanda’s death. Ritu ji was not only a perfect daughter, wife, mother, sister, or mother-in-law, she was also an epitome of women empowerment. (Also Read: Saif Ali Khan And Kareena Kapoor Khan Enjoy A Movie Date, The Duo Looked Adorable Together)

In the male-dominated world of Insurance, she had proved that no work can be gender-biased and, it is pure hard work that pays off. Ritu ji, who was diagnosed with cancer in the year 2013, had taken her last breath after battling the disease for 6 long years. Amitabh Bachchan had informed the death of his samdhan, Ritu Nanda through his blog and had written, “My ‘samdhan’ Ritu Nanda, Shweta’s Mother in Law passed away suddenly at 1.15 Am... cannot communicate... travelling.” Ritu ji’s funeral had taken place at the Lodhi Road cremation ground in Delhi. 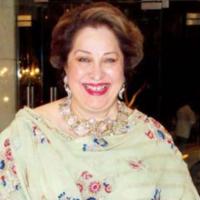 On December 20, 2020, a prayer meeting for Ritu ji was organised and the Nanda, Kapoor and Bachchan family came together to pay their tribute to her. From Amitabh Bachchan, Jaya Bachchan, Abhishek Bachchan, members from the Kapoor family, Nikhil Nanda, Shweta Bachchan Nanda, and their children Agastya and Navya made their presence felt at the event. Amitabh Bachchan paid an emotional speech for his samdhan, Ritu ji at the prayer meet. His daughter Shweta Bachchan Nanda was seen getting emotional as a rendition of the famous Raj Kapoor song, Jeena Yahaan Marna Yahaan played at the ceremony.

On January 18, 2020, after attending Ritu Nanda’s Chautha, her samdhi, Amitabh Bachchan had taken to his blog and had given life and death a deep thought. His blog could be read as “Immersions in the sacred river waters… the ashes washed, flowing by in the flow of the currents... prayers.. a gentle rain.. a blessing they say.. and tomorrow the 4th day, the ‘chautha’.. the prayer meet ... and traditions continue... there must be meaning and reason.. there must be religious sanctity.. there must be belief.. there must be following.. a learning passed on from generation to the next from the times of time... accepted and honoured in its purity and its relevance, through the ages.” (Also Read: Raghu Ram's Ex-Wife, Sugandha Garg Clicks Adorable Picture Of New Daddy With His Baby Boy)

Amit ji’s blog could be further read as “Now the mere images and the memories... vivid, emotional, sincere and lasting ever .. then life moves on... to each his own... births and death days remembered and brought in either prayer or remembrance... a picture garlanded on the walls... solemn occasions made personal with their imagery... blessings sought each morning before the start of day... a touch .. a silent moment... thats it... done... the eventuality of life... a picture on the wall.” 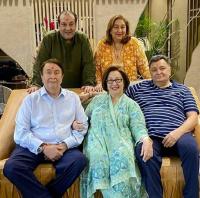 Amit ji concluded his blog by talking about the divine that presides over us, “They that we lost, know all languages suddenly in their demise... they are, if they are in the divine space, hearing seeing watching over all this... a moment that shall never be known to us beings... they that have been lost are the supreme... a supreme hopefully that we all strive for in living... not knowing that the supreme is a reserved exclusivity... you will need a lifetime to get to achieve it... in its solemnity of divine power.” 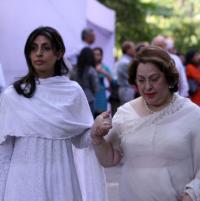 Ritu ji’s funeral had taken place at the Lodhi Road cremation ground in Delhi. While the Bachchan, Kapoor and Nanda family mourned the huge loss, it was Shweta Bachchan Nanda's daughter, Navya Naveli Nanda who could not control her emotions. Navya, who was standing with her mamu, Abhishek Bachchan had broken down as she paid the last rites of her grandmother, Ritu Nanda. It was Abhishek, who had consoled his niece, Navya. (Also Read: Shweta Basu Prasad Finally Reveals The Reason Behind Her Divorce From Husband, Rohit Mittal) 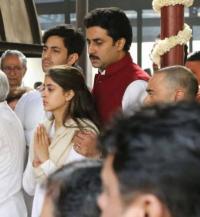 We wish the Nanda family a lot of strength to sail through the huge loss.