Kareena Kapoor Khan and Saif Ali Khan are hailed as the power couple and their recent movie date proves it right. Scroll down to see their adorable pictures! 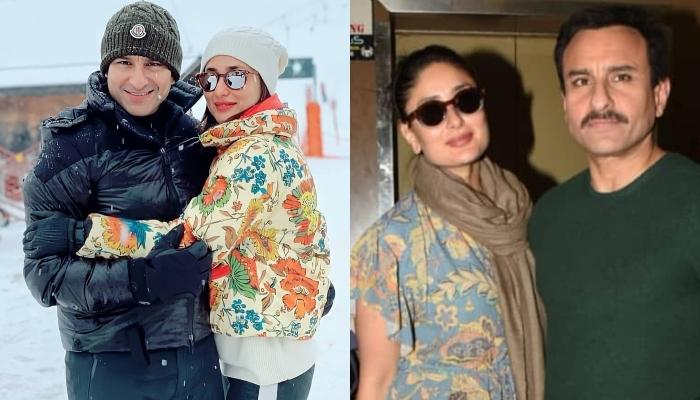 It is said that a marriage ruins the romance between a couple. However, the truth is that it is not the marriage but lack of love that ruins it. These days we are so busy between work, family and social commitments that we hardly have any time left for our spouse. In the midst of running a race called 'life', we have forgotten that a relationship requires work. But one of the Tinseltown couples that have been making sure to keep their love fresh is Kareena Kapoor Khan and Saif Ali Khan. (Recommend Read: Dimpy Ganguly Proudly Gives Glimpses Of Her Little 'Ballerina' Reanna Roy Performing Ballet Of Swans)

Kareena Kapoor Khan and Saif Ali Khan's love story is nothing less than a filmy story. They have been serving #CoupleGoals without portraying their love on social media for the world to judge. The duo had fallen in love on the sets of Tashan (2008). But the news of their romance came into public radar when they were spotted together outside a club in Bandra. Just a year into the relationship, Saif had taken the bold step of tattooing Kareena's name on his forearm. After dating for five years, on October 16, 2012, the duo had sealed the deal in an intimate wedding.

On January 20, 2020, we spotted Kareena and Saif out on a movie date in Mumbai. In the pictures that have been trending on the internet, we can see Kareena donning a casual grey-toned maxi dress with a contrasting scarf. She completed her look with hair pulled up in a bun and a black glares. On the other hand, Saif complimented her by donning a green-hued t-shirt and teamed it with a pair of blue jeans. Take a look at the pictures and videos below:

Last year, in an interview with Pinkvilla, Kareena had revealed an interesting detail about her love story with Saif. She had shared that Saif proposed to her thrice, but every time she said she don't know. In Kareena's own words, "He did tell me that ‘I think we should get married’. He told me that in Greece and he told me that in Ladakh as well. And at that time I was like ‘I don’t know because I don’t know you’. So it was not really a ‘no’ but it was more like an ‘I want to know you better.'" Kareena had further called it the best decision of her life. (Also Read: Arjun Kapoor Shares A Happy 'Same 2 Same' Picture With Mom, Mona Kapoor, Looks Exact Replica Of Her)

She had further added, "He’s 10 years older than me & has 2 kids. But for me, he was just Saif–he helped me heal & love myself. Maybe it was the fact that we’re so different–he’s more private & not ‘Bollywoodised’, but I imbibed that from him. I learnt to balance things & not let them get to me. We'd been dating for a while when he said he’s not 25 & can't keep dropping me home every night. So he told my mom, ‘I want to spend the rest of my life with her. We want to live together.' My mom was cool with it. It’s so easy with him. Even when we decided to get married, it felt right."  (Don't Miss: Madhurima Tuli Reveals Details About Her Fight With Ex, Vishal Aditya Singh In 'Bigg Boss 13' House)

Well, Kareena and Saif are definitely an inspiration for all the married couples! What do you think?

The first time you fall in love, it changes you forever. While your first love doesn't last forever, it kind off gives you the right picture of what you want from your ultimate partner. And that's exactly what happened with Kareena Kapoor Khan before she officially became Saif Ali Khan's