We are about to say adieu to 2018 and there are so many grand weddings lined up that are going to take place in these two months that are left. While a few celebs have already swooned us over with their wedding pictures this year namely, Sonam Kapoor Ahuja and Anand S Ahuja, Neha Dhupia and Angad Bedi amongst others, fans are eagerly waiting for Deepika Padukone and Ranveer Singh and Priyanka Chopra and Nick Jonas’ wedding. One amongst these is the beti of Mukesh Ambani and Nita Ambani, Isha Ambani.

For the ones who have been living under the rock all this while, Isha Ambani is all set to tie the knot with her childhood love, Anand Piramal in December 2018. The lovebirds got engaged in a grand and lavish ceremony in September at the Lake Como, Italy. Their engagement was undoubtedly a magical affair with a few close friends and family members in the attendance. Isha and Anand looked like a royal couple and no one can deny this fact.  (Also Read: Beyonce To Perform At Isha Ambani And Anand Piramal's Sangeet, You Won't Believe What They're Paying) 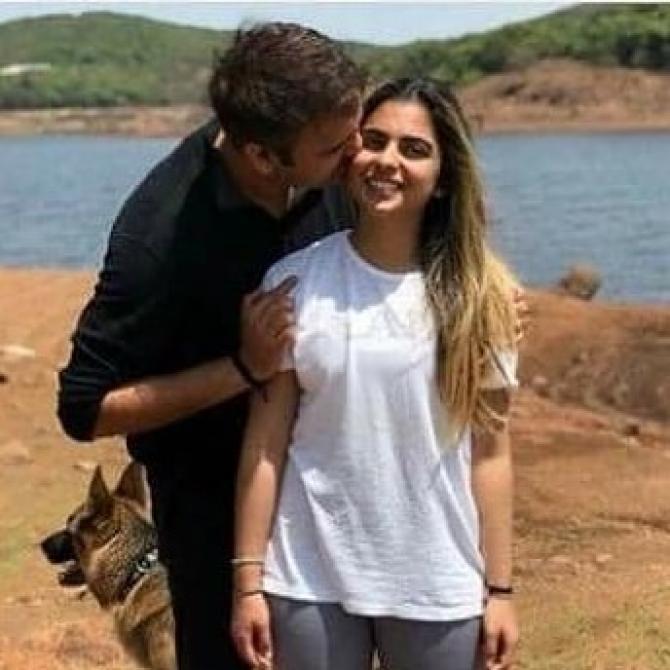 Coming back to the latest news, ahead of Isha and Anand’s grand winter wedding, the stunning Ambani couple, Mukesh Ambani and Nita Ambani visited the Siddhivinayak Temple. The doting parents went to the temple in order to offer their prayers and present the first invitation card of their daughter Isha and Anand Piramal. The parents were also accompanied by their youngest son, Anant Ambani and Kokilaben Ambani. Nita Ambani looked drop-dead gorgeous as usual in her traditional yellow outfit. On the other hand, Mukesh was seen wearing a white kurta pajama with a blue waistcoat. Here are the pictures:

As per the latest reports on Isha and Anand’s wedding, there will be a two-day ceremony that will be hosted by Ambanis, one on December 8 and the other on December 9 in Udaipur. Post this, Anand and Isha will say ‘I Do’ on December 10, 2018, and the rumoured venue for the same is Mumbai. Also, as per the reports, Beyonce might be performing at the duo’s sangeet night for which Ambanis are outlaying approximately Rs 15 crore, as by books she charges $2 million to do private shows. According to Filmfare, a source was quoted as saying, "Both Anand and Isha are super excited to have the celebrated singer perform at their wedding." (Also Check: Sania Mirza And Shoaib Malik Blessed With 'Baby Mirza Malik', The Elated Father Shares The News) The soon-to-be son-in-law of Ambanis, Anand share a very cordial and warm bond with them. In fact, Anand himself shared in a media interaction that his father-in-law had a great influence on his career choices. Talking about the same, he was quoted as saying, “I asked him whether I should get into consulting or banking. He told me, ‘Bring a consultant is like watching cricket or commentating about cricket while being an entrepreneur is like playing cricket. You can’t learn how to play cricket by commentating. If you want to do something, be an entrepreneur in the long term, and start now."(Suggested Read: Ayushmann Khurrana Shares Wife Tahira Kashyap's Reaction When He Fasted For Her On Karva Chauth)

How many of you are excited for this grand wedding of 2018? Do let us know in the comments box below!