Alia Bhatt Reveals Boyfriend, Ranbir Kapoor Is On Her Speed Dial And She Wants 2 Kids In Future

Alia Bhatt Reveals Boyfriend, Ranbir Kapoor Is On Her Speed Dial And She Wants 2 Kids In Future

Alia Bhatt posted a video with her BFF, Akansha Ranjan Kapoor on her YouTube channel, wherein they take up ‘How Well They Know Each Other?’ challenge and reveal some unknown facts of each other. 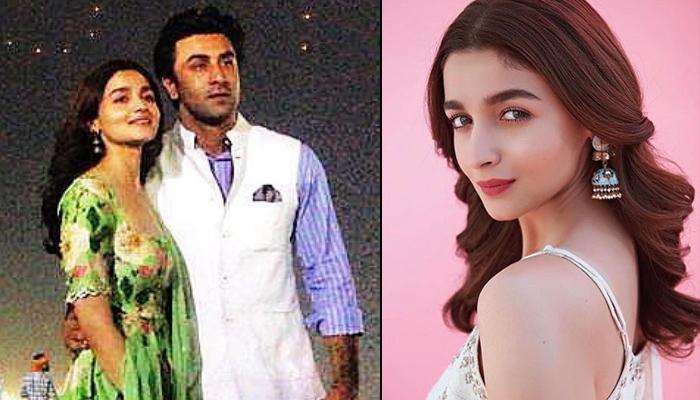 In the 90s, Friendships Day was all about friendship bands, chocolates and gifts. For the millennials, now it is just about long Facebook/Instagram posts, hurriedly made meeting plans or calling up friends you haven’t talked to in years. There were days when friends were there for each other 24x7, supporting you when you’re down, rejoicing with you in your achievements. And then, life happened, everyone got busy and in that rat race, we forgot to keep track of our friends’ lives. Real life seemed to appear like a movie, wherein everything seems perfect with pictures and stories on social media, but no one knows what’s going on behind the scenes. (Also Read: Alia Bhatt's Sister, Shaheen Bhatt Takes A Journey Down The Memory Lane, Shares A Childhood Picture)

So, to prove this wrong and giving us a glimpse of what ‘forever’ friendship looks like, Alia Bhatt and her BFF, Akansha Ranjan Kapoor took a challenge on Friendships Day 2019. Not giving up on the clichés, this BFF duo decided to discover friendship and embrace love with a ‘How Well They Know Each Other?’ trivia. We guarantee a lot of ‘awww’ will follow! Alia had once said in an interview, “I cannot even imagine where I would be today were it not for that handful of friends who have given me a heart full of joy. Let’s face it, friends make life a lot more fun.” And clearly, she cherishes the relationships she has by her side and her friendship with Akansha, is for a keep! 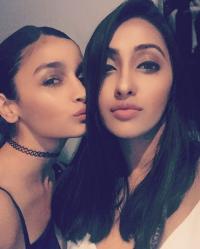 Alia Bhatt posted a video with her BFF, Akansha Ranjan Kapoor on her YouTube channel, wherein they take up ‘How Well They Know Each Other?’ challenge. During the game session, one of the questions about Alia had, “Who’s on my speed dial?” To which, Alia and Akansha revealed, “Ranbir Kapoor”. In another question about Alia, “How many kids do I want?” Akansha and Alia replied to this, “2 boys.” In a ‘Happy Friendship Day’ post for each other, sharing the same picture, Akansha wrote, “My looove, my life, my shawty n my wife. happy friendship day ya’ll” while Alia captioned hers as, “I'll be there for youuuu..Happy OUR day”.

In a Friendship Day special interview with the Hindustan Times, Alia Bhatt and Akansha Ranjan Kapoor talked about their bond and revealed many unknown things about each other. When asked, “How would you describe each other?” Alia replied, “Kanchi (Akansha) is extremely loyal. No one can say anything bad about me to her. We don’t get to spend much time together, but our understanding is deep. She is super bossy and loves doing my makeup.” Akansha retorted, “Ali has evolved emotionally since her childhood. So, my life has been easy, from the days when the boys never called me back to now. During all real-life problems, I never had to go to a therapist. She is my go-to person. People might say ‘oh she’s busy’, but for me, she is a ‘velli’, who is always unconditionally available for me.” 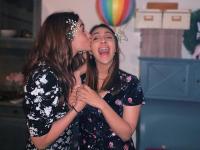 Recalling that one fight you both will never forget, Akansha shared, “When I’m angry, she’d keep calling and I’d keep disconnecting. Then she’ll send voice messages like ‘are you mad?’ During fights, Ali has spoken so loudly that I couldn’t hear anything. In the last 25 years, there was just one fight. We were busy and hardly spoke to each other for six-seven months. After Student of the Year, she went to Marrakesh for a film festival. I didn’t know about it. I told her we need to talk and then I started dreaming.” Alia said, “(cuts in) Every time we have some problem, she dreams that I have died or something has gone wrong with me and I’m crying. The moment she dreams of it, she makes sure we meet.” 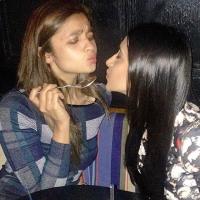 When probed further, “So, the sorry part is done with quickly?” Alia retorted, “We always end up laughing. Once we were shopping at a mall in Dubai, but Kanchi, who loves dahi, wanted to pick some from a supermarket. I told her we can’t as there was no time, but she won’t listen and we started fighting. Suddenly I notice that her gums were bleeding and I was like one second... and we cracked up. But yes, the dahi was picked up and eaten with great excitement.” 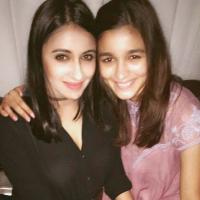 Revealing if there is anything, they dislike about each other, Alia Bhatt stated, “I don’t like the way she deals with her romantic relationships. She’s very quick to judge. She’s an amazing friend and people should see that side in relationships, too.” Akansha said, “Ali radiates a positive vibe, but, over the years, she’s losing her fun side. At times, she takes herself too seriously.”

In difficult times, how do you comfort each other? To this, Alia replied, “We don’t say the obvious things to each other. I expect her to know my mind more than I know my own. She knows what’s the right thing to say to me at that time. Your best friend should be the first person to slap you, not your enemy.” And then, Akansha answered, “We don’t call to share the problem, we usually call to vent. It’s really crazy how when she says ‘I’ve met a guy’ and I’m that friend who is already pissed. I’m like ‘What? Why? Who is he? Get him out? I don’t want him, I don’t like him’.” Alia concluded with, “So the first thing is protection from her side.” (Also Read:  (Also Read: Mira Kapoor Gushes On Shahid Kapoor's Chocolate Boy Pic, We Are Nostalgic With His 'Ishq Vishk' Days) 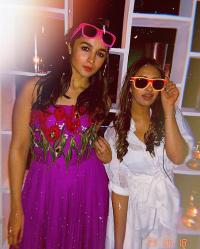 There had been talks about Alia Bhatt helping her BFF and making her ready for her Bollywood debut. Clarifying on the same, Alia said, “As kids, we were in the school plays, dancing and singing together. So now, when she is taking the leap, I’m very excited. I’ve also read these reports about me helping her, but Kanchi has done everything on her own. She has gone for auditions, met people and sometimes, I didn’t even know. Then finally she nailed the part. I’m there to give advice, but can’t take away her achievements. I feel more nervous about her career than mine. I’m there for support, but she doesn’t need it because she has her head in the game.” Akansha remarked, “I’ve a golden goose in my life (laughs). I know that she has my back, always.” 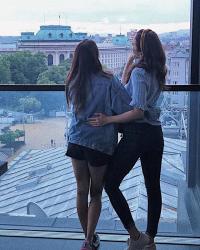 When asked, “What advice did you give Akansha?” Alia replied, “That it takes time to find your footing and she’ll have to control herself on Instagram.” Reminiscing the emotional moment when she got know about her Bollywood debut and it was Alia who gave her the news, Akansha recalled, “Last December, a Tarot card reader predicted I’ll sign my first film in March (2019) and an angel friend will reveal the news. On March 28 this year, I was watching a film when Ali called and said, ‘Remember what the Tarot card reader said?’. And she revealed I’ve got the part. Though we laughed, it was a very emotional moment.” 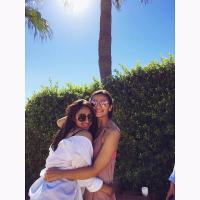 “How about working together in future?” Alia retorted, “That’s going to be crazy. We did shoot a brand shoot together and people on the set were like ‘what’s wrong with these two?’ I’m looking forward to the day when I give her the best debut actor award and go to Koffee With Karan together.” Akansha continued, “The Koffee with Karan dream needs to be fulfilled soon.” 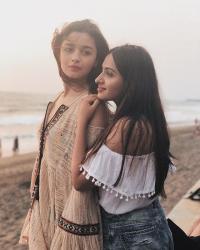 In a fun trivia, Akansha Ranjan Kapoor was asked some questions about Alia Bhatt and vice-versa. About Alia’s first boyfriend, Akansha revealed, “It was in 6th standard and the boy was Adam. Ali dumped him the moment he left school and moved to another guy.” Alia’s favourite song, “She listens to what I make her listen to, so, it’s Senorita. Before that it was Gravity and Lamborghini.” And one thing Alia always carries, “Her phone and AirPods.” 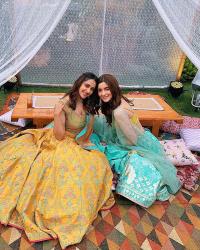 Then Alia Bhatt answered some questions about her BFF, Akansha Ranjan Kapoor. Revealing Akansha’s favourite actor, Alia replied, “She has this big crush on Drake, though he isn’t an actor. Apart from that we both are Kareena Kapoor fans.” Akansha’s favourite film of Alia’s, “Humpty Sharma Ki Dulhaniya and Kapoor & Sons.” And Akansha’s favourite pass time, “Watches documentaries.” (Also Read: Sushmita Sen Believes Her Decision To Adopt Her Daughters Renee And Alisah Was Not An Act Of Charity) 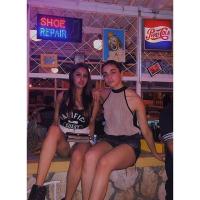 How did you celebrate Friendship Day? Let us know your favourite memories with your bestie! 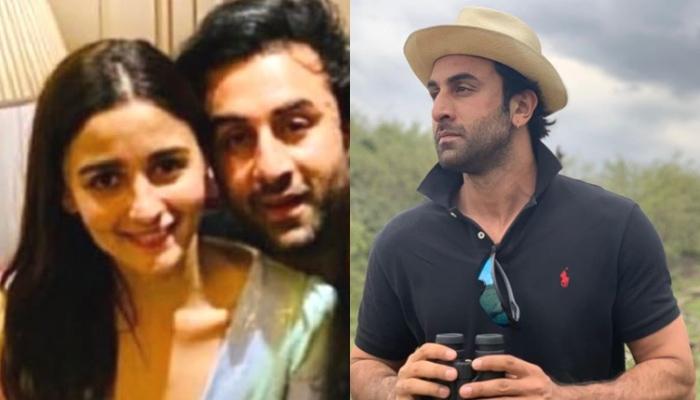 In the Tinseltown, celeb couples build up an image of a perfect romantic relationship for their fans and followers, so when the news of their breakup emerges, it crushes our hearts. It shatters our hearts to witness the couples parting their ways after giving us #CoupleGoals. And the same emotions ruled