Bollywood actor, Akshay Kumar lashes-out at the reports claiming he has booked a charter plane for his sister and her two kids. Find out!

The coronavirus cases are rising all over the country as we enter into the unlock 1.0. With a lot of guidelines and precautions, the government has allowed a lot of things to restart. However, there are still a lot of sectors that are still on hold because of the requirement of too much staff. One such industry is the entertainment industry, although a lot of movies and television shows have granted permission to shoot with strict laws and guidelines. However, some of the mega-stars of the Bollywood industry are still in lockdown and one such actor is Bollywood’s Khiladi, Akshay Kumar, who is spending time with his family but is doing work from home. (Recommended Read: Sargun Mehta Wishes Her 'Bhabhi', Charu Mehta On Her Birthday, Calls Her The Sister She Never Had)

Surprised? Well, the actor is doing a new job and that is exposing the people that are selling fake news on the internet. Recently, the actor rubbished all the reports about him booking a charter plane for his sister and her two kids with his one tweet. 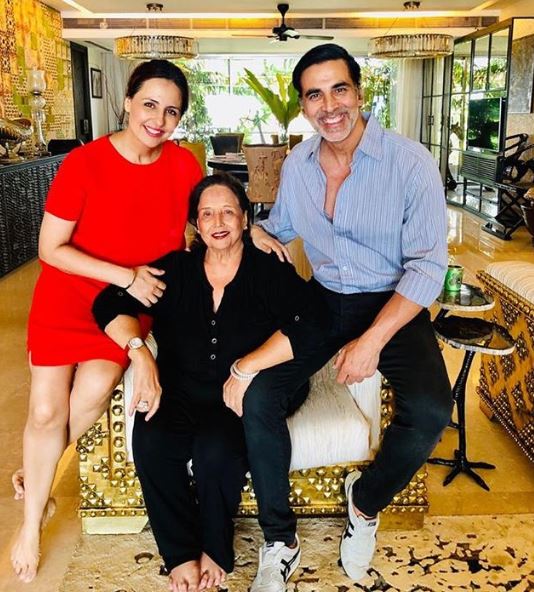 There were a lot of headlines all over the internet and some of the biggies of the news channels network were also reporting that Bollywood actor, Akshay Kumar had booked a charter plane for his sister and her two kids to keep them safe from the ongoing coronavirus pandemic. But on May 31, 2020, Akshay Kumar took to his Twitter handle and tweeted a short note clarifying that all the reports that are running all over the media are false. His tweet can be read as “This news about me booking a charter flight for my sister and her two kids are FAKE from start to end. She has not travelled anywhere since the lockdown and she has only one child! Contemplating legal action, enough of putting up with false, concocted reports!” Along with his tweet, the actor has also shared an article by India Forums about the same fake topic. Take a look. (Don’t Miss: Sajid-Wajid Fame Wajid Khan Dies At 42, Video Of Him Singing 'Hud Hud Dabang' In Hospital Goes Viral)

This news about me booking a charter flight for my sister and her two kids is FAKE from start to end.She has not travelled anywhere since the lockdown and she has only one child!Contemplating legal action,enough of putting up with false, concocted reports! https://t.co/iViBGW5cmE

During the time of lockdown, a lot of media houses are finding it hard to churn out newsworthy stories from the glamour and entertainment world. That is the reason why the rise in the percentage of fake news is getting higher and higher. However, Akshay Kumar isn’t leaving this sort of fake news going away with ease around these days and tries his best to expose them all. Like he did on May 30, 2020, when he had taken to his Twitter handle and had posted a picture of a fake casting call that had circulated widely all over the internet. The actor had stated in his tweet that “Corona ke samay fake news toh bahot sunni ab fake casting bhi ho rahi hai #Filhall yeh padhiye #FakeNewsAlert #FakeCastingAlert @NupurSanon @BPraak @AmmyVirk @yourjaani @arvinderkhaira @azeem2112 @VarunG0707 @_hypepr #desimelodies #CapeOfGoodFilms.” Take a look.

Right now, the actor is spending a lot of time with his family in the lockdown and with his fans through his different social media handles. Recently, the actor was in a lot of headlines, when his doting and gorgeous wife, Twinkle Khanna had shown him that she’s the real boss. On May 28, 2020, Akshay Kumar had taken to his Twitter handle and had written down a few lines along with two beautiful pictures from his film, Padman as the film had completed 2 years of its release. In the tweet, the actor had talked about the importance of menstrual hygiene in his tweet and it could be read as “It’s been 2 years to #PadMan and I’m glad we managed to push the envelope a little on this taboo subject. This #MenstrualHygieneDay, I hope we move a step closer towards ending period poverty and breaking taboos surrounding menstruation. @sonamakapoor @radhika_apte.” Take a look. 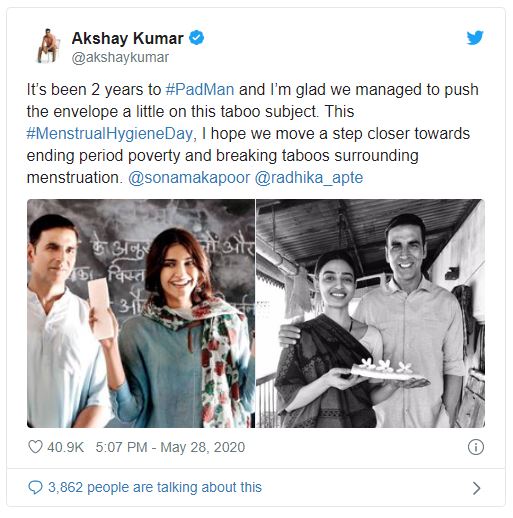 Moments after his tweet had gone live on Twitter, Akshay Kumar’s wife, Twinkle Khanna had retweeted his tweet and had informed him that he’s no longer a part of her next production. Her tweet could be read as “Err... You are not part of my next production! #PadMan.” After which, Akshay Kumar had quickly credited his wife, who was the producer of this film, R. Balki, the director of the film, and the real Padman, Arunachalam Muruganantham in his next tweet which could be read as “Please mere pet pe laat mat maro Missed tagging the team. Apologies to my producer, @mrsfunnybones, director #RBalki and the man without whom Padman wouldn’t be made @murugaofficial.” Take a look. (Also Read: Virat Kohli Says Wife, Anushka Understands His Body Language, Shares Their Small Conversations) 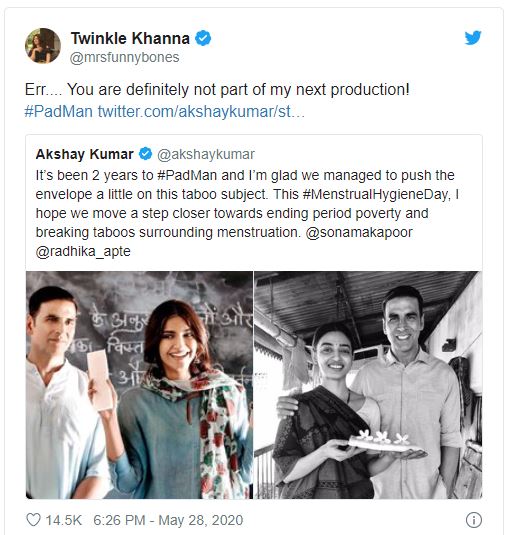 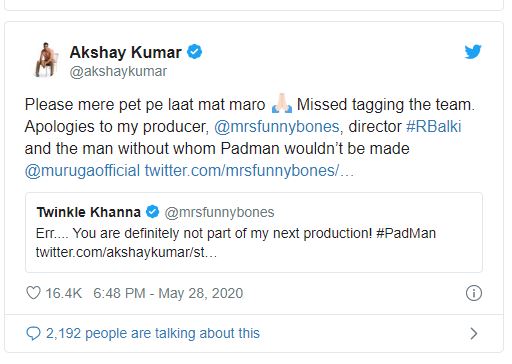 What’s the weirdest fake news you have come across in this lockdown? Let us know!