Bollywood's famous music director, Wajid Khan passed away after suffering from a kidney infection and an old video of him singing in hospital trends on the internet. Take a look! 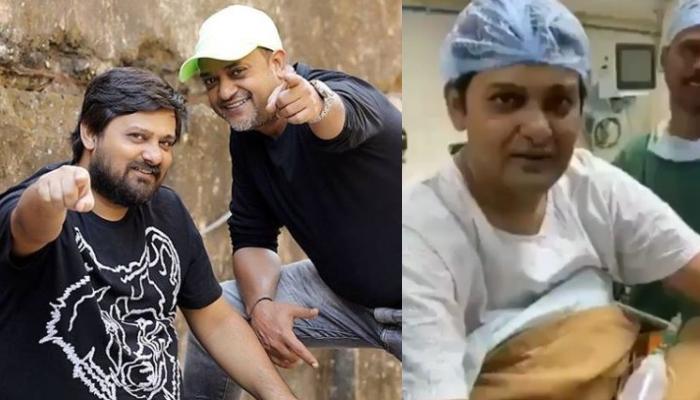 Every day we witness coronavirus pandemic rising up with record cases from all over the country as India jumps on the seventh place in the list of ‘Top 10 countries worst hit by Coronavirus in the world’. However, it seems like the worst year for the Bollywood as we saw legendary actors, Irrfan Khan and Rishi Kapoor leaving us for the heavenly adobe and now another renowned name has left us forever. We are talking about the popular and one of the most successful duos of music directors, Sajid-Wajid. The duo has been a part of incredible movies and quite particularly behind the success of Bollywood’s superstar, Salman Khan. (Recommended Read: Sanjay Dutt Remembers His Mother, Nargis Dutt On Her Birthday, Shares A Heartmelting Video Of Her)

However, Wajid Khan passed away early in the morning today and it has been reported by PTI in which Wajid’s brother, Sajid Khan also revealed that he was tested positive for the ongoing coronavirus pandemic. It has also been reported by Sajid-Wajid’s close friend and music director, Salim Merchant that Wajid was hospitalised at Surana Hospital after his condition had started taking a bad turn. In his words, "He had multiple issues,” Merchant added. “He had a kidney issue and had a transplant a while ago. But recently he got to know about kidney infection. He was on the ventilator for the last four days, after his situation started getting worse.”

On June 01, 2020, famous Bollywood and fashion photographer, Viral Bhayani took to his Instagram handle and posted a heartbreaking video of late Wajid Khan. In the video, we can see the famous music director sitting on a hospital bed with a white medical gown and plastic cap on top of his head. In the old throwback video, we can hear Wajid saying “Sajid bhai ke liye toh ek hi gaana gaunga main…Mann balwaan laage chattan..rahe maidaan mein aage…hud hud Dabangg Dabangg." After which, he had even started singing the title track of Dabang 3 that gives us a small indication that maybe the video is from last year when the third sequel of the film had released. Along with the video, Viral Bhayani wrote a caption and it can be read as “A heartbreaking old video of #wajidkhan. This is not a recent video. #rip.” Take a look. (Don’t Miss: 'Bua' Ekta Thanks Laksshay For Making Her Mom First, 'Papa' Tusshar Reveals His Son's Birthday Wish)

For the uninitiated, Wajid Khan and his brother, Sajid Khan had made their debut in Bollywood with Bollywood’s bhaijaan, Salman Khan’s film, Pyar Kiya To Darna Kya back in 1998. Since then, there’s no looking back for this iconic duo and had become brothers from another mother for Salman Khan. The more heartbreaking thing to digest is the fact that the brothers-duo had composed the two recently released songs of Salman Khan named Pyar Korona and Bhai Bhai. After the news had come out in public, the whole Bollywood fraternity has come forward to extend their respect and tribute to the late music composer. Some of the popular celebrities are Priyanka Chopra Jonas, Sonu Nigam, Parineeti Chopra, Varun Dhawan, Salim Marchant, Babul Supriyo, Vishal Dadlani, and many others paid their last respect to the late music composer.

Heartbroken. Both @SajidMusicKhan and @wajidkhan7 have been close & true friends. The kind who might see the light on and show up at our studio in the middle of the night just to meet and talk and share a laugh. Can't believe Wajid and I will never speak again. — VISHAL DADLANI (@VishalDadlani) May 31, 2020

Shocked to hear about the cruelly untimely demise of Wajid of the renowned Composer duo of SajidWajid•Incredible loss of a very very dear friend & a very very talented musical mind - a Gr8 sport....
@BeingSalmanKhan @singer_shaan @RameshTaurani

Devastated with the news of the passing away of my brother Wajid of Sajid -Wajid fame. May Allah give strength to the family

shocked hearing this news @wajidkhan7 bhai was extremely close to me and my family. He was one of the most positive people to be around. We will miss u Wajid bhai thank u for the music pic.twitter.com/jW2C2ooZ3P

Wajid Bhai you were the nicest, nicest nicest man! Always smiling. Always singing. All heart. Every music session with him was memorable. You will truly be missed wajid bhai. #WajidKhan — Parineeti Chopra (@ParineetiChopra) May 31, 2020

Terrible news. The one thing I will always remember is Wajid bhai's laugh. Always smiling. Gone too soon. My condolences to his family and everyone grieving. Rest in peace my friend. You are in my thoughts and prayers.@wajidkhan7

There’s no doubt in the fact that the bond between the two brothers, Sajid and Wajid was unexplainable. The way they used to support and love each other at every step of their respective lives is simply a rare thing to witness in this modern world. Once in their press conference, the duo was asked about their relationship and how they divide the work between them, Wajid Khan had stated, "Sajid and I are both passionate about our work and we give each other space. We both have different styles of music so according to the film, we decide and divide our work. We do have our share of fights…since Sajid is my elder brother, I listen to him.” (Also Read: Ranveer Singh Reacts To Wife, Deepika Padukone's Photos With Ex-Beau, Ranbir Kapoor Remembering YJHD)

Thank you for making our lives better with your songs. Rest in peace, Wajid Khan!