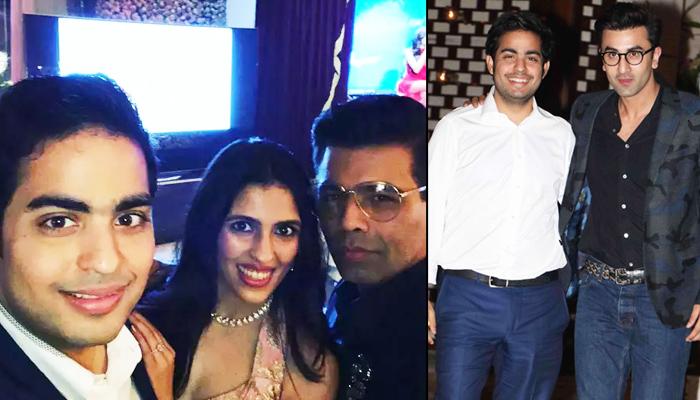 Friends don't let friends walk down the aisle without that last memorable ‘night of freedom’. While we all are still bracing ourselves and getting over the hangover of the wedding hoopla of Isha Ambani and Anand Piramal, it is now time for another Ambani wedding! The same is of none other than Nita Ambani and Mukesh Ambani’s eldest son, Akash Ambani. Akash and his fiancée, Shloka Mehta got engaged in early 2018 and were expected to get married by the end to the same year. But things got delayed and revealing the reason of the same later, let us share some details about Akash’s pre-wedding bash. (Also Read: Akash Ambani And Shloka Mehta Get A Grand Welcome As They Arrive For The Mittal Wedding)

Sometime back, Shloka was spotted with her mother, Mona Mehta outside a designer store and seems like the shaadi ki taiyaariyan have begun zoron-shoron-se. And now as per a DNA report, the Ambani scion will head to Switzerland for his bachelor party between February 23-25, 2019. Apart from the groom-to-be’s friends, Ranbir Kapoor and Karan Johar from B-town are expected to join the bash. Reportedly, two private jets will be given to the bachelor squad for their bash.

The dates of Akash and Shloka’s wedding are not yet announced but the preparations seem to be going on in full swing. In a recent interaction with Vogue, Isha Ambani Piramal revealed that Akash willingly gave up his wedding dates for his darling sister. Isha had said, "Akash has the largest heart ever. He changed his wedding dates for me. He got engaged to Shloka before Anand and me, but he was like, “I’ll get married afterwards, you take my wedding dates.” He’s like one of the most—I don’t think there’s a word for it in English—“dayalu” humans in this world. He’s empathetic, gracious and gentle, just like Shloka."

Further revealing the bond that her hubby, Anand Piramal shares with her brothers, Akash and Anant, Isha elaborated, "My siblings love him (Anand). He is hysterical and always has everyone in splits! One thing that he always tells me that I did not practice in my life earlier, is spirituality. He quotes the Bhagwat Gita often. Through him, I have learnt that in life, nothing can substitute good thoughts and good deeds. Akash and Anant look upon him as an older statesman of the family."

Talking about her soon-to-be sister-in-law, Shloka, Isha had stated, “In fact, Shloka’s sister, Diya [Mehta Jatia] and I were in the same class in Sunflower and then in JB [Petit]. We have been best friends for over 25 years. Then when I moved to Ambani, I skipped a grade and went to Shloka’s class. So I’ve been like a third sister to them. I was thrilled with the engagement news. Shloka’s always been part of the family for us.” (Also Read: Unseen Pic Of Ambani 'Bahu' Shloka Mehta Donned In Red, Gives Us A Mini-Glimpse Of Her Bridal Look)

Coming back to Shloka and Akash’s wedding, their engagement celebration pictures and videos created a storm on the internet in 2018. Shloka, in an interview, opened up about the love of her life Akash and was quoted as saying, “Despite years and busy schedules, we have always found ways to stay connected. Akash is incredibly grounded, and we share a bond based on meaning and memories. We don't just get along - we also support each other's hopes and aspirations and are determined to build a sense of purpose in our lives together. We are lucky to have a love that began with being best friends and luckier still to have such supportive families.”

On the other hand, Akash revealed, “I am truly happy that our friendship has blossomed into love and Shloka and I are getting married, she is a truly special and extremely kind-hearted person”. In another interview with a leading media portal, Nita Ambani, post-Akash and Shloka’s proposal had said, “I have known Shloka since she was four and we are all delighted to welcome her to our home and our hearts”. A source close to the family had revealed, “Shloka is a very charming girl, extremely cultured and it’s difficult to say which of the two families is lucky with this upcoming marriage.” (Also Read: Akash Ambani And Shloka Mehta Redefine Couple Goals In This Unseen Picture From Their Engagement)

How excited are you for another Ambani wedding this year? Keep us posted!