Expressing his views on social media trolls, Ajay Devgn said that his daughter, Nysa Devgan doesn’t care about the negative and hateful comments. 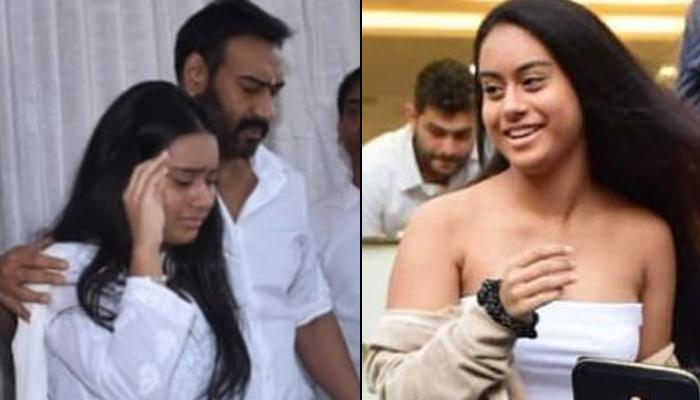 Daughter of Kajol and Ajay Devgn, Nysa Devgan has become the talk of the town and is receiving a lot of attention from fans, online and offline. Nysa did her schooling from Dhirubhai Ambani International School in Mumbai, post which she got enrolled in the United College of Southeast Asia in Singapore in early 2018, away from the media scrutiny. (Also Read: Shahid Kapoor Reveals His Wife Mira Rajput Kapoor Brought An Army Of House Helps After Their Wedding)

Social media does not spare anyone, especially if you are a celebrity. And just like the stars, kids are also under close media scrutiny much like their famous parents. Everything about their life is on social media, courtesy paparazzi, and they are followed by their fans on Instagram to see what they're up to and where they are vacationing. The downside to it is that they also become a target of hatred and negative comments on social media.

Even though B-town celebrities have learnt how to deal with the trolls and hit back at them in their own unique way, it bothers them when their children are judged and trolled on the social media platform, bearing the brunt too. Something similar happened with Ajay Devgn, who has once again spoken about the trolls targeting his 16-year-old daughter, Nysa Devgan.

On May 27, 2019, Bollywood's most renowned stunt and action choreographer and father of Ajay Devgn, Veeru Devgan, had passed away. And the next day, paparazzi spotted a smiling Nysa Devgan walking out of a beauty salon. Netizens had trolled Nysa for visiting a salon right after her grandfather's demise and had called out on her star parents, Ajay and Kajol on their parenting skills. But in some, sense prevailed too as they called out the photographer for purposely posting Nysa’s picture and invite trolls.

Expressing his views on social media trolls, Ajay Devgn said that his daughter, Nysa Devgan doesn’t care about such negative comments. In an interview with the Deccan Chronicle, Ajay stated, "Jo bhi yeh karte hain, unka mindset bakwaas hota hai (The mindset of people who do these things is rubbish). So we too, don't bother about all that, nor do we pay any heed to such nonsensical comments made through fake identities." (Also Read: Sameera Reddy Shuns Trolls In An Epic Way Who Fat-Shamed Her For Flaunting Baby Bump On Her Babymoon)

Addressing the same in an earlier interview with the IANS, Ajay Devgn shared his angst as his kids have to go through such harsh trolling. Ajay had said, "Judge me but don't judge my kids. Kajol and I are the actors, judge us...it's because of us, our children are under the spotlight every time. Being judgmental about someone is not a good thing. If I start passing judgement on someone, that person would obviously feel bad...so do my children. Honestly speaking, those people don't really matter. But I feel bad sometimes when my kids go through such harsh trolling."

And when he was further probed to reveal how Nysa reacts or deals with such trolls, Ajay Devgn had shared, "She used to get upset over trolling earlier, but now she doesn't care about it anymore. She knows how to deal with it. She has accepted that there will be some people who will keep judging no matter what." Further sharing a tip to tackle troll, he had said, “Avoid it. If you will react, they will react more, and this will continue. So better to stop fighting against trollers.”

In January 2019, Ajay Devgn and Kajol’s daughter, Nysa Devgan was trolled for one of her airport looks, wherein she sported a regular-fit blue hoodie and had worn it as a sweatshirt-cum-dress. Commenting on the same, Ajay had said, "She is just a 15-year-old and I feel, at times, people forget that and talk rubbish. She was wearing such a long shirt and she was also wearing shorts. Now because of the length of the shirt, her shorts weren’t visible and the kid got trolled for that.”

Further claiming that the brewing paparazzi culture is not good for any celeb kid, Ajay Devgan had said, “I don't know what kind of people these are and because of them, we are paying the price. I request the paparazzi to at least leave the children alone. Why are they paying the price for their famous parents? I don't think any child is okay with paparazzi. They want their space. They want to not dress up every time they step out, so it's very sad when such things happen.” (Also Read: Malaika Arora Trolled For Wearing Saree Like A 'Sanskari Bahu' At Sonam Kapoor Ahuja's Birthday Bash)

Don’t you think netizens should behave sensitively towards celebrities and their emotions? What are your views on the trolling? Keep us posted!