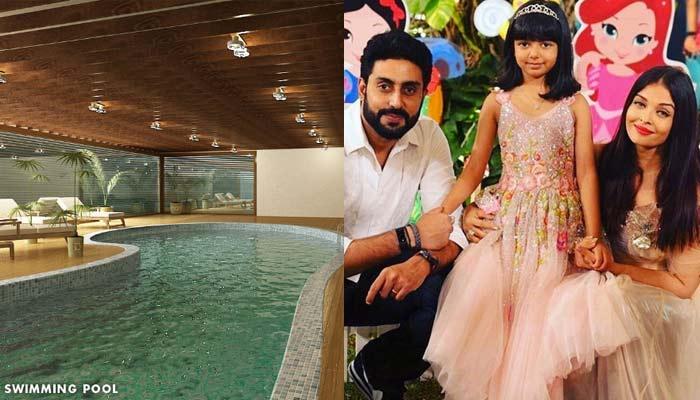 It was not long time back when Virat-Anushka’s luxuriously plush apartment in Worli swayed us with their dreamlike house. Now another celeb couple’s palatial pad is all set to make you jealous. We are talking about none other than Abhishek Bachchan and wife Aishwarya’s naya aashiyan. The couple is currently residing in their family home Jalsa with their little one, Aaradhya.

Recommended Read: Newlyweds Virat And Anushka Will Soon Shift To Their Dream House At This Sea-Facing Location

Bachchan’s new 5,500 sq ft extravagant apartment is at the high-end Signia Isles, Bandra-Kurla Complex. It is an addition to their family home in Juhu, an apartment on the 37th floor of Skylark Towers located on Annie Besant Road in Worli, an apartment in NYC and a plush villa in Dubai’s Sanctuary Falls in Jumeirah Golf Estates. According to the reports, the couple bought this house back in 2015 for a whopping Rs 21 crore.

According to Architectural Digest, Abhi-Aish’s apartment is designed by an in-house team, and the couple will have Bollywood actress and Anil Kapoor’s daughter Sonam Kapoor, as their neighbour. Sonam too bought the house in the same year 2015, when Abhishek bought it. And her 7,000-sq-ft duplex apartment in the same building had cost her a little over, whopping Rs 35 crore.

The rumours surrounded the Bachchan family that Abhishek might move out of Jalsa to live in his new apartment. But the source close to the Bachchan family said, “Abhishek is way too close to his parents to even think about moving out. Even Aishwarya understands what it means to be close emotionally and physically to your parents and she has never wanted a home away from Jalsa (the Bachchans’ home for the last 20 years)”. The source added, “He may buy any number of properties. But his heart remains in his family home.”

Abhishek’s swanky new property is only a “financial investment and not an emotional one”. Bachchan’s home is separated into two sides- one where Abhishek, Aishwarya and Aaradhya live and the other where his parents live. And it is joined by the living room area. So, both the couples have their privacy while living in the same house.

After the love sparks ignited between Abhishek and Aishwarya while shooting for the item song Kajra Re, on the sets of Bunty Aur Babli (2005), they tied the knot on April 20, 2007. The couple welcomed their angel daughter, Aaradhya on November 16, 2011. Abhi-Aish love spending time with their lovely daughter, and she is often seen travelling with her mother. After the sabbatical break, Aishwarya made a comeback with Jazbaa and was last seen in Karan Johar’s Ae Dil Hai Mushkil. And on the work front, Abhishek was last seen in Housefull 3.

Such a beautiful house! Hope this house brings in happiness and prosperity in their lives.