A video from the celebrity football match has Aaradhya Bachchan run to her father, Abhishek Bachchan, who carried her in his arms as soon as she nears him, while Aishwarya Rai Bachchan gets a hug.

‘Family’, the very word comes with its own set of bliss, togetherness, fighting over petty issues at the dinner table and of course, bonding and love. We cannot imagine our life without our weird lot of people with whom we share common surnames! And when it comes to our favourite celebrity family and giving out goals, the Bachchan clan gets a prominent mention. How beautifully is every member of the Bachchan family connected to each other! And Junior Bachchan’s lot, which comprises of Abhishek Bachchan, Aishwarya Rai Bachchan and their little munchkin Aaradhya Bachchan are a treat to the eyes! (Do Read: Chhavi Mittal Enters 10th Month Of Pregnancy, Says Only The Baby Decides When The Labour Begins)

It was only on April 20, 2019, when the star couple, Abhishek Bachchan and Aishwarya Rai Bachchan completed 12 years of marital bliss. The couple, along with their 8-year-old daughter, Aaradhya Bachchan had flown off to the Maldives to celebrate the special occasion. While Abhishek took to Instagram and had posted a series of pictures from their dreamy holiday, their little princess, Aaradhya had turned paparazzi for them! Aishwarya had taken to Instagram and posting a picture of her and Abhishek sitting together, wrote, “Our Togetherness captured by The Divine Light of Our Lives LOVE YOU AARADHYA.” Here are the pictures: 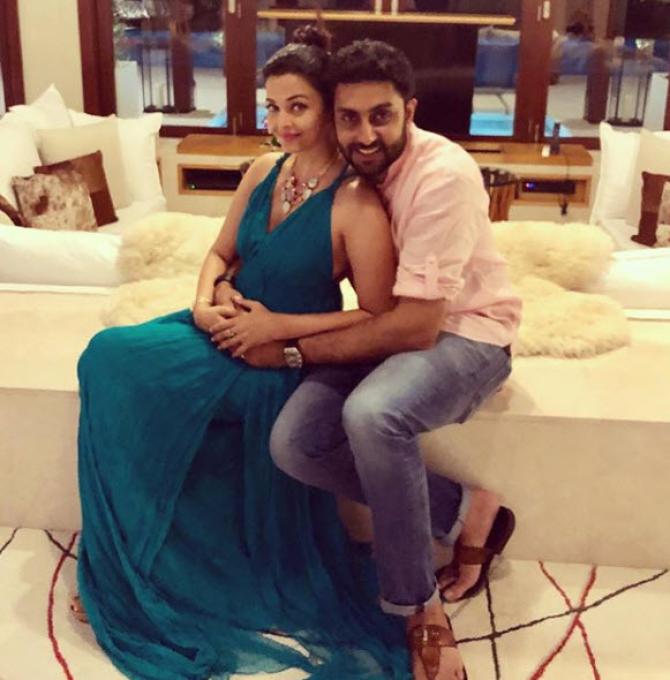 It was on May 01, 2019, when an array of Bollywood and television stars had huddled up for a celebrity football match. Abhishek Bachchan, who has a keen interest in sports and owner of Jersey number 32, is an active member of the football match, along with stars like Ranbir Kapoor, Aparshakti Khurana, amongst others. Amongst the many guests present at the do, Abhishek had two very special spectators coming in to watch the match and it was none other than his wife, Aishwarya Rai Bachchan and baby daughter, Aaradhya Bachchan. A video from the field which is going viral on the internet has Aaradhya run to her father, Abhishek, in the field who carried her in his arms as soon as she nears him, while wife, Aishwarya gets a warm hug from him. Here’s the video for you to checkout:

Another series of pictures from the football field has Aishwarya Rai Bachchan and Aaradhya Bachchan looking intently at the ongoing match. The mommy-daughter duo was dressed in casuals and looked awesome together! While Aishwarya had sported a blue jacket and black skin-fit below-the-ankle length pant, Aaradhya looked pretty as a doll in a pink star-studded top, matching hairband and shoes and black pants. A Pinkvilla report stated that Aishwarya and Aaradhya had watched the match for quite sometime before leaving the field. However, before leaving, Aaradhya was heard saying “I love you 32” (32 being Abhishek’s jersey number) to her daddy! How adorable, isn't she? (Must Read: Virat Kohli Surprises Anushka Sharma With A Sunset View Lunch Date On Her 31st Birthday [Video])

Very recently, on April 29, 2019, the Bachchan clan comprising of Aishwarya Rai Bachchan and Aaradhya Bachchan went out for a family dinner at Yauatcha, Mumbai. While Aishwarya had looked stunning in black denim, white tee and a dark grey shrug which she had complemented with nude ballerinas and a long beaded necklace, her little one, Aaradhya aced it in a floral dress with a matching yellow hair band. But what caught netizens’ attention once again, was the young star kid clinging on to her mother every time paparazzi captured them. And in no time, they became a subject of brutal trolls. Checkout screenshots of the same below: 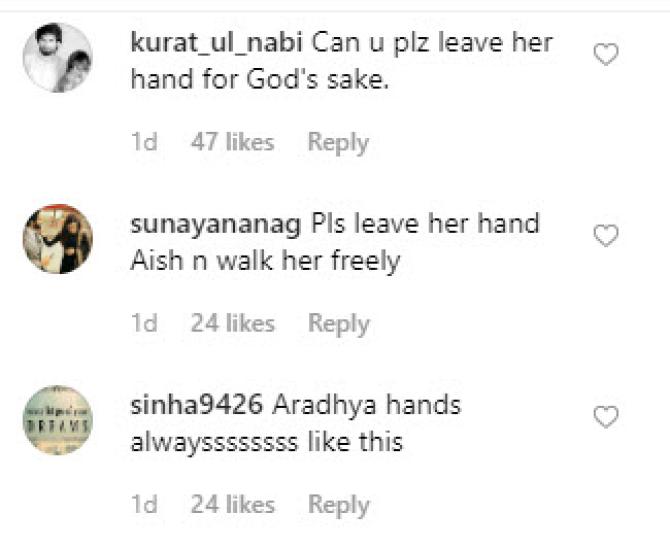 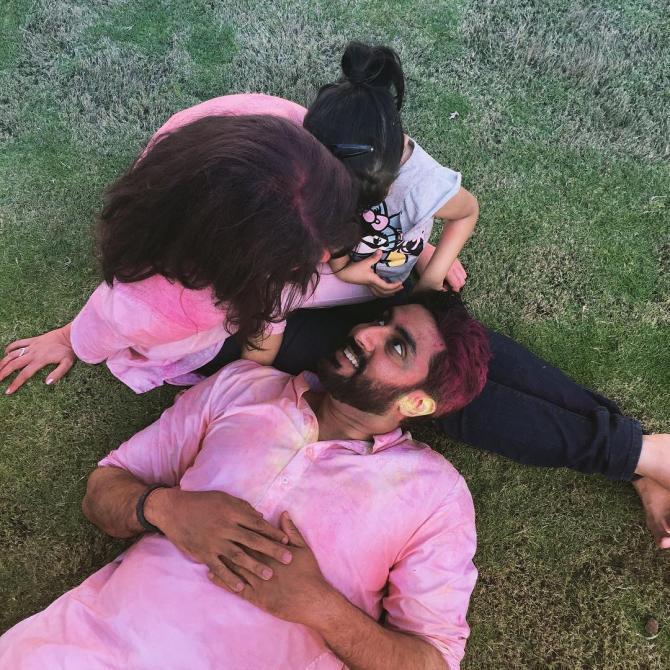 Do you know, soon after the birth of their daughter, Aaradhya Bachchan, Aishwarya Rai Bachchan, and her hubby, Abhishek Bachchan had updated their relationship from friends to becoming a responsible couple, overnight? Yes, the Kajra Re star had stated in an interview, “Overnight, we went from being dearest of friends to looking to being a couple and starting a family together, you know how quickly that happened.” She had further spoken about Abhishek and added, "He’s a friend, companion, husband, and a father, but I think the fact that he’s my bestest friend pretty much encapsulates it all. We are a very normal couple. Abhishek and I sometimes joke about being second siblings. We both share and talk a lot about what we are feeling. Sometimes, we have so much to say that we want to be the first to share it. So I have to say this first: we are both good listeners, but also extremely talkative.” (Must Read: Kartik Aaryan's 'Hush-Hush' Visit To Sara Ali Khan's House Makes Us Wonder What's Cooking?) 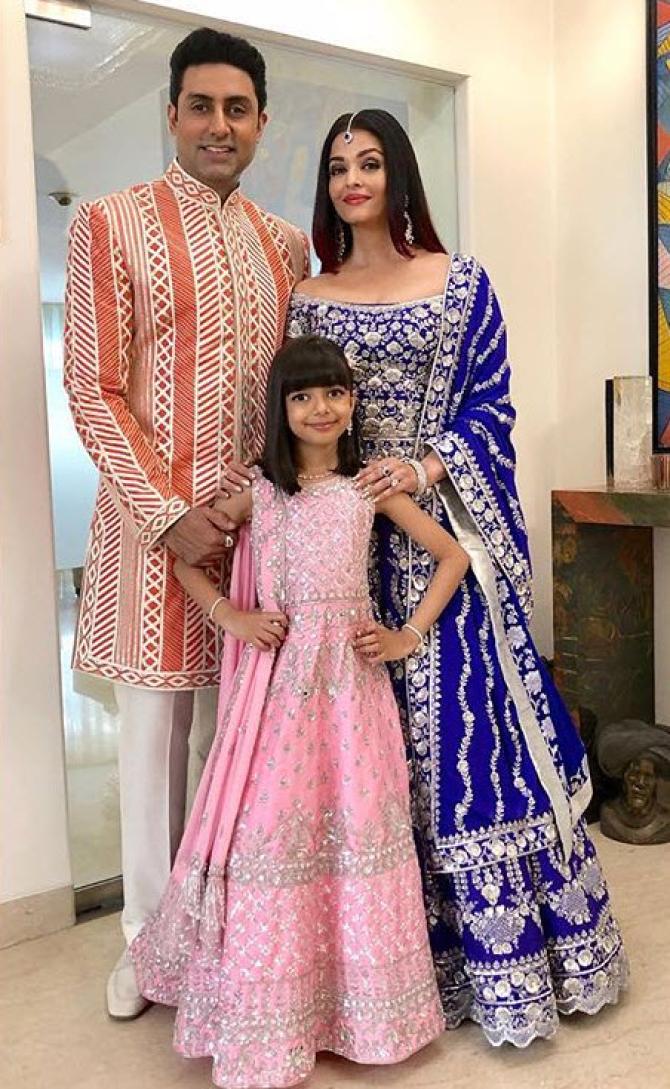 We love catching glimpses of the Bachchan fam, don’t we? Let us know!