At the opening of his studio, Zaid Darbar talked about his wife, Gauahar Khan and their beautiful bond. Scroll down to know more! 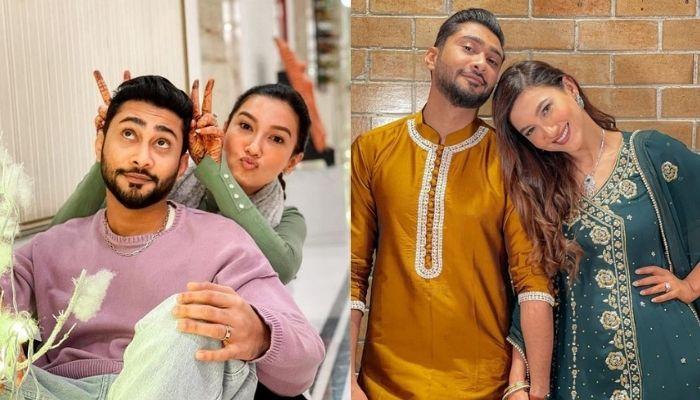 The last few weeks had been the most amazing time in Bollywood actress, Gauahar Khan and her shahuhar, Zaid Darbar's life. A lot of new beginnings have worked out for the couple. On December 25, 2020, Gauahar and Zaid had begun their 'happily ever after' and now Zaid has launched his new studio. On the occasion of the same, Zaid spilt some beans about his gorgeous wife, Gauahar and their married life. (Recommended Read: Amitabh Bachchan Recalls When Son, Abhishek Bachchan Gave His First Autograph, Shares A Picture)

Zaid Darbar launched his studio, Atrangz in Mumbai and guess who was there to cheer for her hubby? Yes, the very beautiful, Gauahar Khan. Zaid Darbar talked about his new studio and his wife, Gauahar Khan's contributions towards making his dream come true. He also talked about their marriage and their bond. Scroll down to know more!

In an interview with Pinkvilla, Zaid spoke about how he came up with his studio's design ideas and revealed Gauahar's inputs in the same. Talking about his chemistry with his beautiful wife, Gauahar Khan, Zaid said, "About Gauahar and my chemistry, it is so beautiful that is why people are loving it. Mashallah, we are pure and true to each other, and that is the only reason people are liking our chemistry."

Zaid then talked about Gauahar's inputs for the decor of the studio and said, "Gauahar has also given her beautiful input for the interior in my office especially, as we met after most of the things were done. But I'm sure if we would have met earlier, she would have taken care of most of the things. Gauahar sure is an amazing interior designer as my office is looking beautiful because of her inputs. And I feel, when you are true and pure from the inside, the outputs will be amazing, always. And thank you to everyone for supporting and appreciating. It takes a hell lot of time to do the interior of such a big place, and though it was a little tough due to the lockdown, it all went well in the end."

Zaid also revealed that he feels nervous launching his studio and said, "Though it all went really well, as we all were together. The whole team did the best they can to make it work." His gorgeous wife, Gauahar Khan was also present at the studio's launch as she came to cheer for her beau. She along with Zaid's parents and family came to wish him luck. Gauahar spoke to the media and praised all the efforts done by her husband, Zaid and his team to design his studio. (Also Read: Raj Kundra Wishes To Have Married A Village Girl, Turns His Wife Shilpa Shetty Into A 'Gaon Ki Gori')

Gauahar Khan and Zaid Darbar have become a social media sensation in a short time owing to the cute and adorable moments they share. Yesterday, on January 12, 2020, Gauahar had shared a video of Zaid dropping her to the jetty boat on her IG stories as she had resumed work. The actress had captured Zaid's video standing on the dock and waving out to her, donning a black tee and track pants. Atop it, the actress had written, "Guess who came to drop me even to the jetty today @zaiddarbar u the best."

Some days ago, Gauahar and Zaid had visited a friend's house. The actress had donned a stunning lime green silk saree with a colourful border. Leaving her hair open, she had posed happily with Zaid, who had opted for a blue kurta. In the caption, Gauahar had written, "Thank you @vastranti for this stunning saree. Loved it. Nobody captures me like my husband. @zaid_darbar #Maharashtrian #traditions #Love" (Don't Miss: Aditya Narayan Explores Vineyards With His 'Partner In Crime' Shweta Agarwal, Posts A Romantic Photo)

Well, we're excited about Zaid Darbar's new studio! Are you?