Indian cricketer, Yuvraj Singh delighted his massive fanbase with adorable glimpses of himself performing fatherly duties with his son.

Indian cricketer, Yuvraj Singh and his wife, Hazel Keech are one of the most adorable couples in the glamour world. Apart from being an all-rounder on the cricket ground, Yuvraj is an all-rounder in real life as well. He is a loving and caring hubby to Hazel and a doting father to their newborn son. Though the couple does not share glimpses of their son on social media, Yuvraj left his entire fanbase in a frenzy as she shared a super cute video of himself acing his fatherly duties on his IG handle.

On May 5, 2022, Hazel Keech had shared the first-ever glimpse of her baby boy on her IG stories. In the picture, the little munchkin was seen lying on a bed in a red-coloured onesie with 'Rule The Galaxy' written on it. However, Hazel had not revealed her baby boy's face as she had hidden it by adding a Star Wars sticker atop it, which reads, "May the 4th be with you." Check it out: 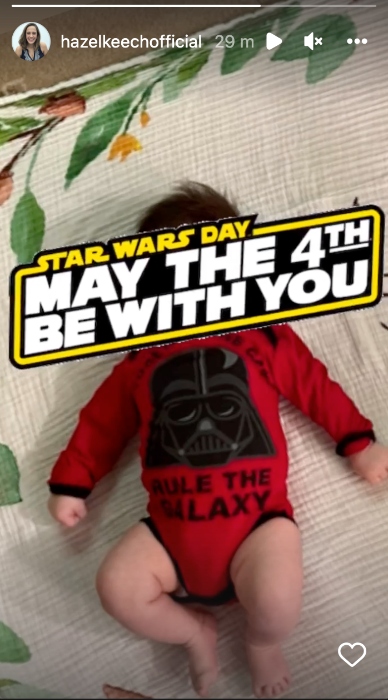 On May 8, 2022, Yuvraj Singh took to his IG handle and dropped a super cute video. In the video, Yuvraj shared some unseen cutesy glimpses of himself acing his daddy duties with his 3-month-old son. From changing diapers to swaddling his baby boy, the doting daddy learned it all, and the video is proof of the same. Along with it, Yuvraj penned a note, heaping praises on his wifey, Hazel Keech, which can be read as:

"Overwhelmed to share my journey as a father on this Mother’s Day. I believe the best thing we can do for mommies is to be an equal partner in parenting. Be it diapering or feeding, I was always learning but @hazelkeechofficial was just perfect."

Though Yuvraj and Hazel's millions of fans were eagerly waiting for their favourite couple to share a glimpse of their newborn baby, the newbie parents refrained from doing that. However, while sharing the video and opening up about his fatherhood journey so far, Yuvraj sent us in a meltdown with not one or two but many glimpses of his little munchkin. Here are some of the unseen father-son moments of Yuvraj with his 'sonshine'. Check it out below:

For the unversed, Yuvraj Singh had tied the knot with his ladylove, Hazel Keech on November 30, 2016, in two grand ceremonies. The much-in-love couple had always kept their personal life private but never missed a chance to delight their massive fanbase with adorable glimpses of their married life. And later, on January 25, 2022, the couple had embraced parenthood with the arrival of their baby boy on their respective Instagram handles. Well, we are in love how Yuvraj is acing his daddy duties. What about you? Let us know.

Also Read: Dia Mirza Reveals How Her Step-Daughter, Samaira Has Saved Her Number On Her Phone, It's Hilarious