On November 2, 2022, Yuvraj Singh gave a sneak peek into his playtime with his son, Orion Keech Singh as he shared an adorable video with him.

Former Indian cricketer, Yuvraj Singh tied the knot with actress-model, Hazel Keech, and the couple was blessed with a baby boy, Orion on January 25, 2022. Being extremely private people, Hazel and Yuvraj kept their baby away from the media glares for the longest time. However, now, Orion enjoys a huge fan following as his fans adore him for his cutesy antics and to-die-for smile.

For the unversed, it was on January 25, 2022, Yuvraj and Hazel had taken to their respective IG handles and had announced the arrival of their first child. The then-newbie parents had shared a picture note, dedicated to all of their friends, family and fans and revealed that they are blessed with a baby boy. Their note could be read as:

"To all our fans, family and friends, We are elated to share that today god blessed us with a baby boy. We thank god for this blessing and wish you to respect our privacy as we welcome the little one into the world. Love, Hazel and Yuvraj." On November 2, 2022, Yuvraj Singh took to his IG handle and shared an adorable picture with his son, Orion. In the picture, the daddy-son duo can be seen sitting on a beach chair as they posed for the lens. Yuvraj donned a neon-hued t-shirt and black shorts, on the other hand, Orion looked the cutest in a white striped t-shirt and matching shorts. Sharing the picture, the cricketer penned:

"Watch out for my Superman !!! @jumeirahzs thank you for the lovely stay once again!!! Until next time."

Yuvraj also shared a super cute video on his IG stories, in which he can be seen playing with his son, Orion. The doting daddy held his son in his arms as he turned Orion into a Superman. Yuvi was seen running to the other end of the terrace and saying, "Superman incoming", while Orion giggled in the cutest way possible. Atop the video, he penned:

"Watch out for Superman in your hotel."

On September 24, 2022, Yuvraj Singh's wife, Hazel Keech shared a picture of their son, Orion, wherein he could be seen lying on a bed and watching a cricket match on the television. The little munchkin was wrapped in a towel as he had just bathed. His doting mommy revealed that Orion was looking for his father, Yuvraj Singh, as she penned, "Papa?" atop the picture. However, the next picture was from the moment when Orion finally met his father and was sitting on his lap. His happiness was clearly visible on his face. Sharing the picture, Hazel had penned:

"Ohhhh this one is PAPA!"

We love how Yuvi performs his daddy duties with his little one, Orion!

Hazel Keech's Son, Orion Turns One Year Old, She Reveals Why Her Baby Laughs At Her When She Cries 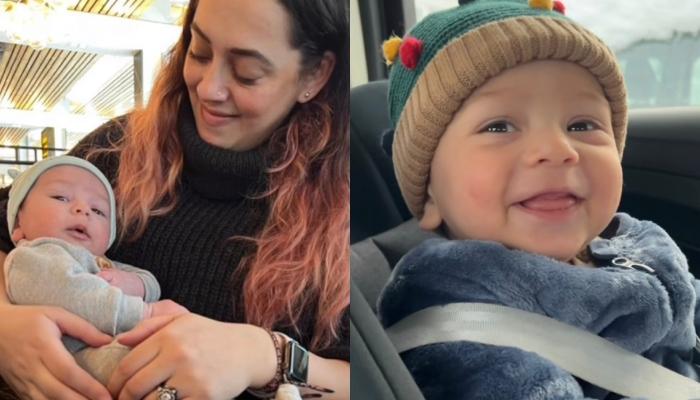 Former Indian cricketer, Yuvraj Singh tied the knot with actress-model, Hazel Keech, on November 30, 2016. After a few years of marital bliss, the couple was blessed with a baby boy, Orion Singh Keech, on January 25, 2022. Fast forward to today, their adorable son is one-year-old now, and he has