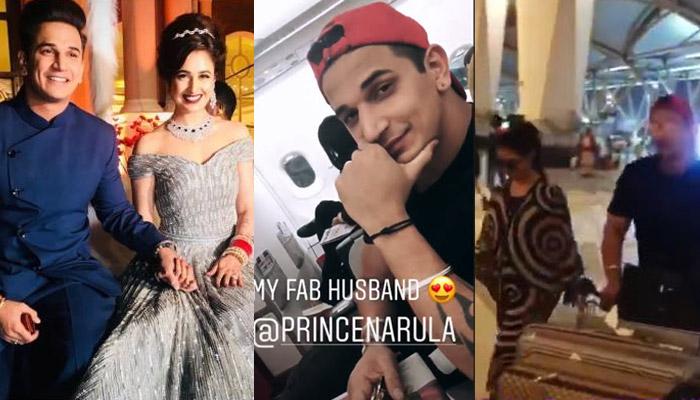 Television’s cutest couple, Prince Narula and Yuvika Chaudhary came together and walked down the aisle on October 12, 2018, in Mumbai in the presence of their close friends and family. PriVika (as their fans fondly call them and their wedding hashtag) make a lovely couple together and looked every bit of royal on all their functions, justifying being prince and princess to each other. Their wedding was preceded by fun-filled sangeet and mehendi functions. And then after the wedding, on October 21, 2018, Prince and Yuvika hosted a grand wedding reception party in former’s hometown, Chandigarh.

Before jumping on to their honeymoon, let us tell the uninitiated ones a bit about Prince and Yuvika’s love story. The two met during their participation in a famous reality show, Bigg Boss season 9. Prince already fell flat for Yuvi (as he lovingly calls her) during the show, Yuvika, on the other hand, took her own sweet time to say ‘yes’. All-in-all, love happened between the two and finally, they became mister and missus to each other. (You Nay Also Like: Prince Narula Hugging Yuvika Chaudhary's Mom On The Vidai Ceremony Leaves Her In Happy Tears)

Coming back to their honeymoon, well, now that all the festivities and celebrations are over, the newly-weds, Prince Narula and Yuvika Chaudhary have left for their honeymoon. Can anyone guess what is their honeymoon destination? Well, Prince and Yuvika’s honeymoon destination is the tropical paradise, Maldives. Early morning while leaving for their much-awaited alone time, the lovebirds were snapped at the airport. Not just this, in fact, Yuvika and Prince also shared some Instagram stories from the airport and flight. Checkout:

Also, for the ones who have followed Prince and Yuvika’s wedding pictures and videos all this while must have noticed that they were looking straight into each other’s eyes and smiling all throughout. Do you what’s the reason behind this? Well, PriVika’s official photographers Epic Stories have shared the secret. Posting a picture from their wedding, they wrote, “SECRET IS OUT! What’s the story behind both of them looking at each other and smiling? We heard prince speaking to Yuvika on the phone about how they’re gonna react to phere and Vidai. They had a bet they won’t cry until the end. So every time they looked at each other, they shared a little conversation with eyes. Or maybe it was just a disguise trying to control the tears. Well played @princenarula @yuvikachaudhary”. (Also Read: Prince Narula And Yuvika Chaudhary Make A Grand Entry On Floral Carriage At Their Reception [VIDEO])

Apart from this, do you know Prince’s mother went to Yuvika’s house with the rishta when he was inside the house? Yes, you read that right! Yuvika herself stated, “We were strangers inside the Bigg Boss house. While Prince developed a strong liking for me in the beginning of our stay, I wanted to take some time. We fell in love much after the show ended. I even told him inside the house that if he is trying to be pally with me for the ratings, I am the wrong girl.”  (Checkout: Unseen Pictures And Videos Of Prince Narula And Yuvika Chaudhary's Wedding Reception In Chandigarh) 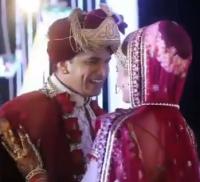 She further continued, “However, his feelings were genuine. He would often tell me that I should talk more, as he feared that I wouldn’t last for long on the show (laughs!). We are one of those few jodis whose love blossomed on the reality show. In fact, I was all set to fly off to New York for a course and changed my plans just a day prior to entering the house. Also, I had been declining their offer almost every season. I was taken by surprise when his mother came to my family with his rishta when he was still inside the house. So, in a way, Prince and I were destined to be together. I tell him jokingly that he came to Mumbai for me.” (Also Read: Prince Narula Shares Wifey Yuvika Chaudhary's First Look After Marriage Playing Post-Wedding Games)

Prince and Yuvika, we are eagerly waiting for your honeymoon pictures in the Maldives, please keep sharing!