Bigg Boss fame Prince Narula and Yuvika Chaudhary decided on forever on October 12, 2018, giving some major relationship goals to all other couples out there. Right from their Bigg Boss days together to now as a newly-married couple, Privika(as their fans fondly call them) has always hooked their fans and gathered a lot of love. Today, on October 22, 2018, Prince and Yuvika are having a gala and grand wedding reception in former’s hometown, Chandigarh.

The event (yes,it is an event for the grandeur it boasts of) seems so lavish and grand that words would fall short to describe. Yuvika is looking mesmerising in a grey gown and that pretty diamond jewellery. And Prince is looking dapper as usual in his indo-western blue coloured outfit. (You May Also Like: Prince Narula And Yuvika Chaudhary's First Look From Reception, She Wore Pretty Diamond Jewellery) Just like the way Prince and Yuvika are looking ravishing and royal, their entry (rather GRAND entry) made many go green with envy. Yes, you read that right! Yes, Privika’s entry together as a newbie husband and wife was as grand as it could have been! The lovebirds entered the venue in a big palki, which was adorned with fresh flowers. Here check out the video for yourself:

Prince and Yuvika's wedding photographer Epic Stories revealed one secret of the couple. They took to their official Instagram account and wrote, “SECRET IS OUT! What’s the story behind both of them looking at each other and smiling? We heard prince speaking to Yuvika on the phone about how they’re gonna react to phere and Vidai. They had a bet they won’t cry until the end. So every time they looked at each other, they shared a little conversation with eyes. Or maybe it was just a disguise trying to control the tears. Well played @princenarula @yuvikachaudhary”. (Check Out: Deepika Padukone And Ranveer Singh Finally Confirm Their Marriage, Share Wedding Invite)

In an interview earlier, Prince shared his feelings and said, "I've been dating her in my head for a long time. I added the female portion to this song so she could sing it with me. I've loved her since Bigg Boss and initially thought it was one-sided till she explained that she needs time. I've told her that whenever she is ready, we'll take the relationship forward." 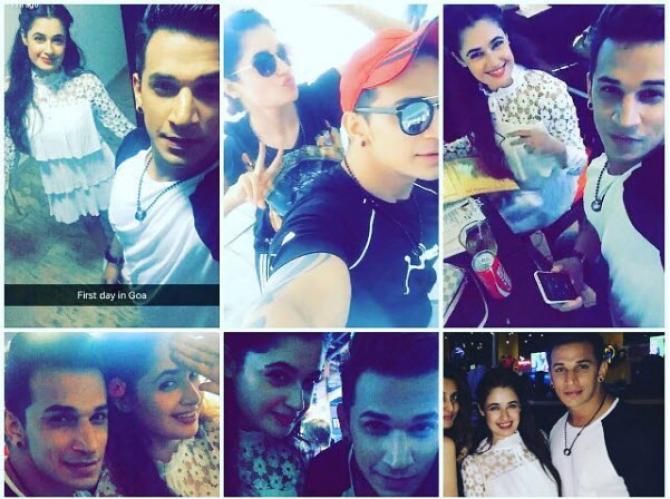 And when Yuvika was asked about her feelings, she was quoted as saying, "I won't deny that we enjoy each other's company. He's always been true about his feelings and is a genuinely nice guy. But any girl will take the time to think about it before committing." Sharing the details about their proposal, Yuvika had earlier revealed to Bollywoodlife and was quoted as saying, “we were fighting like mad until yesterday. I had no clue he was secretly planning to propose to me because he was behaving so weird in the past few days. He was arguing on silly things, initiating random fights. So I was like okay then I don’t see a future with you, I think we are not meant to be together. But despite saying this, Prince refused to calm down. Instead, he too seconded my thoughts and was like Ya I think our relationship is going nowhere…we should end it. I was shocked to see this side of Prince. I even told him you have changed, you are not the same Prince I have known all these years.” (Also Read: Ankita Bhargava Found Solace In Painting Post Miscarriage When She Was Going Through Tough Phase) There is no denying the fact that Prince and Yuvika make a perfect couple, each other's king and queen in literal sense. what do you guys have to say on their grand entry?