Sure, the entire focus of the Big-day is on the couple who are tying the knot. But there is a lot more to the wedding than just the bride and the groom. And one major facet of the celebrations and ceremonies are the bridesmaid squad who are no less than the leading ladies on their best pal’s wedding. After all, they are the one who will be holding the bride’s hand and walk her to the aisle with utmost ease. So, they not only deserve to look their ravishing best but outshine all with their individual style statement.

Let’s meet a few crazy bridesmaids from the celeb world who has left no stones unturned to exude their own personal style and excitement. Be a game changer as a bridesmaid with some clues from hot babe Kareena Kapoor. From a star like Bebo we can expect nothing else but a quintessential and glamorous outfit at her friend Amrita Arora’s nuptials. For the most important day of her friend’s life, she wore a stunning bridesmaid gown in peach and caramel, twinning with the bride tribe. The Ashley Rebello gown was identical to other bridesmaids’ dresses but as a maid of honour, she added some variety and dimension to her wardrobe with a unique neckline and shoulder pattern. In fact, she was a killer blend of girlie and glam in an off-shoulder layered gown. The bouquet she was holding added up to her majestic and ethereal look. 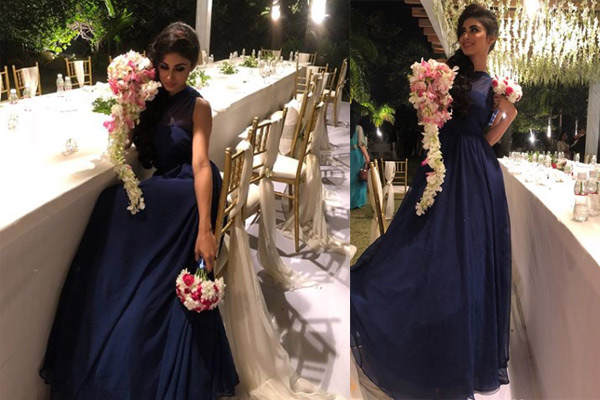 Actress Mouni Roy turned many heads at Aashka Goradia’s wedding with Brent Goble while still letting the bride be the center of attraction. She went high on glam and ethnic fervour with vibrant prints and daring colours at the string of events. On the big-day, Mouni outshone all the ladies on board in a long navy-blue gown. She was the cynosure of all the eyes as she reflected her vibrant and youthful persona. An absolute charmer with side-swept hair and the bouquet in her hands; Mouni made her fans, friends, and fashionistas go crazy over her looks. Ada Khan channeled her inner princess in a soft pink off-shoulder gown at her friend Aashka Goradia’s destination wedding. Of course, she did not want to outshine the bride, so she opted for a delicate couture with soothing hue and intricate sequin work. You can’t help but fall in love with this bridesmaid outfit which is rich and exquisite in design. From hairdo, to make-up and couture; everything about Ada Khan’s look screamed elegance and royalty. Along with the bride Aashka, Ada Khan too shared the limelight as the maid of honour. The Naagin fame actress was flaunting a fairytale effect in her lavish and desirous attire. Shamita Shetty kept it minimal yet striking in an exquisite colour saree at Bipasha’s wedding reception. The royal fabric, heavy embellishments and the name Manish Malhotra turned the subtle and regular saree into an ideal wedding wardrobe. Her hairdo and diamond ruby jewellery were oh-so-elegant and added ample grace and charm to her desi diva look. Her Bottega Veneta box clutch was undeniably beautiful and added some drama to her traditional avatar. So, Shamita was standing out without taking away any of the bride’s limelight. 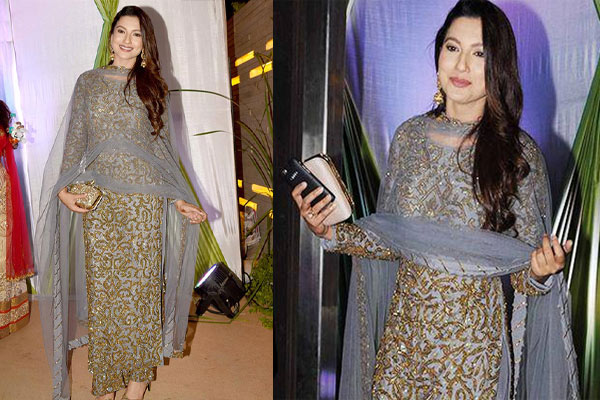 The beauty of mesmerising Gauhar Khan left us awestruck as she turned up as the happiest maid of honour ever at actress Mandana Karimi’s wedding ceremony. The maid of honour was looking like a complete diva in the classic, heavy detailing grey and gold Mayyur Girotra salwar suit. In an outfit, replenished with zari work, the model-turned-actress cut out a pretty picture. The designer Dwarkadas Chandumal danglers and her upbeat clutch offered magic to her traditional avatar. Besides the couture, the fancy strappy sandals were a bonus for her unique fashion statement. Also, donning a Monika Nidhi outfit at the wedding reception, the damsel was looking her festive best. She has enhanced the embellished outfit with silver and red danglers. If there was an award for the best-looking bridesmaid in town, it should go to Sonakshi for sure. She gave her friend Sakshi’s wedding ceremonies and festivities a fresh look with her expressive wardrobe. Honoured to be by her friend’s side, Sonakshi showcased her exquisite style statement in luxurious attire. Sonakshi sported a traditional Anita Dongre couture which consisted of an embellished long net jacket. The subtle and impressive designer number was complemented well with peacock jhumkas again by designer Anita Dongre’s Pink City Collection. Her dazzling diamond ring added up to her graceful and splendid look. A neatly tight bun with flowers too was inspiring. Well, her friend’s wedding was surely one of her best moments of life and she wanted to make the most of it. Sonam Kapoor’s outfits are always quirky, edgy and chic. She again sent off some major fashion vibes at her friend Cookie Boolani’s wedding where her style was a mix of ethnicity and royal factor. She looked drop-dead gorgeous in a red and pink lehenga with gota patti work. Sonam complimented her stunning lehenga with a delicate polki necklace and earrings. As it was a day wedding, Sonam kept her make-up minimal and hair tied in a stylish chignon. With that perfect smile, Sonam was looking like a priceless diva. 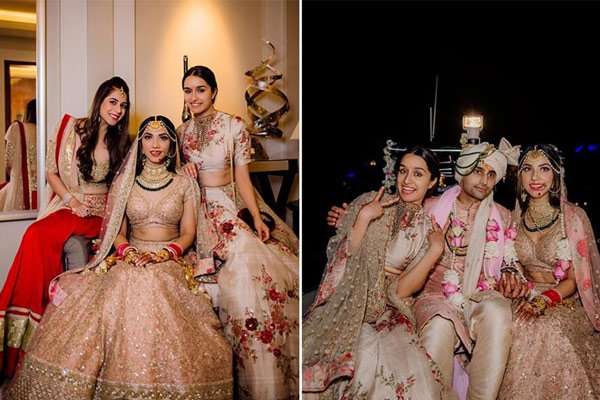 Ek Villain star Shraddha Kapoor took on the role of a supporter and bridesmaid for her friend Eshanka Wahi’s destination wedding. We love the brush of colours, charm of florals, the touch of elegance and rich craftsmanship she got customised on to her attire. Subtle and elegant; it was a perfect wedding wardrobe for the bridesmaid. Shraddha pulled off the embellished dupatta with style and panache. The floral motif skirt teamed with a crop top was looking out-of-the-world. The neat hairdo was looking ultra-glam and pretty without screaming for attention. 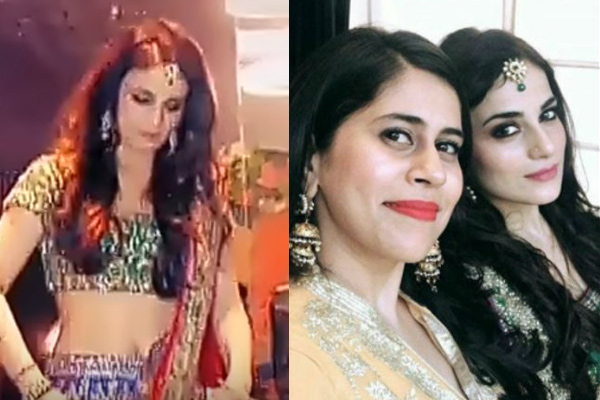 What do we expect from one diva of telly land attending the wedding of another diva of telly land? Radhika Madan made her fans go gaga over her princess’s avatar as she appeared in a traditional blue-green lehenga at her friend, Smriti Khanna’s wedding. The peacock-coloured lehenga was paired with a red dupatta it had intricate kundan embroidery, which made the ethnic outfit look more exotic and pretty. The accents of crystal made the unique couture even more special. Radhika as a bridesmaid stole the show in her extravagant and striking outfit. 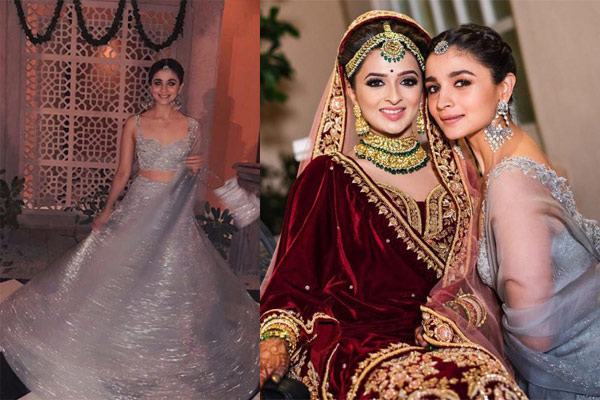 For her bestie Kripa Mehta’s destination wedding in Jodhpur, Alia assembled the outfits that appeared chic, ethnic, youthful and flattering. She had her pick as per the occasions but for the main day she went for a classy coy Indian look. The bridesmaid Alia chose a silver-coloured lehenga for the main wedding. The cute actress was looking nonchalant and expressive in a shining attire by Koecsh by Krésha Bajaj. Her hairdo in a braided bun style was enhanced with white flowers which made her even more spectacular. Wearing a dark and well-defined eye make-up and nude shade lipstick, she was looking no less than a damsel. Getting it right for all the pre-wedding ceremonies was surely a tricky task but the cute actress excelled at it and went down as one of the coolest bridesmaids in Bollywood history.

Check Out: Video Of Alia Crying At Her Bestie's 'Vidaai' Is Every BFF Who Can't See Her Friend Going Away 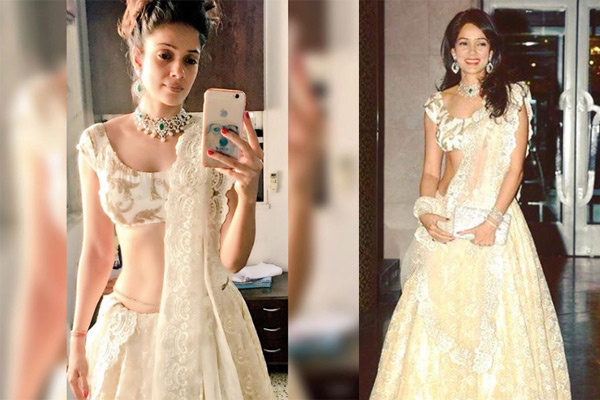 There is no denying that Chak De girls always rock the show. For that matter don’t give Vidya Malwade’s eye-catching appearance a miss at her friend Sagarika Ghatke’s wedding. The beautiful off-white lehenga with a petite choli was looking like an artwork in gold-embossed designs. She looked absolutely resplendent in this appalling glam garment.

Isn’t it lovely to see these celebrities rocking the role of ‘maid of honour’? Being a part of the bride tribe, they made sure they looked absolutely drool-worthy but still gave the bride her share of the spotlight. So, if you too are stepping up to serve as a bridesmaid for your bestie’s wedding; here is all you can choose for the occasions.

Next Read: Dear Bestie, Here Are 12 Things I Need To Tell You Before You Tie The Knot