The Chhoti si baat actor, Vidya Sinha’s film career was brilliant. But in real life, however, the stress eventually came to an end. 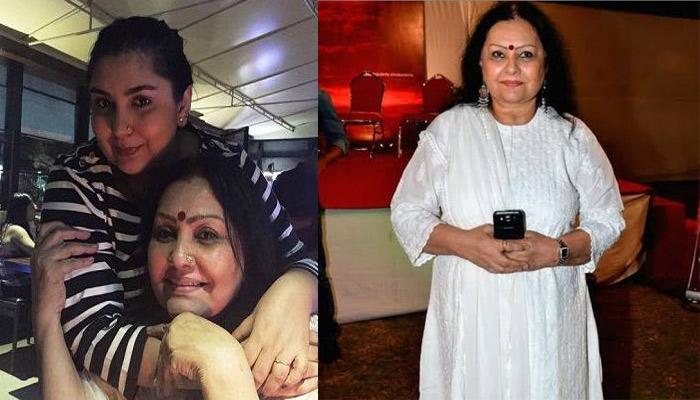 At a time when Zeenat Aman, Parveen Babi and Rekha ruled the box office, a beautiful, dusky, married women, Vidya Sinha, became a household name with her film Rajnigandha. Vidya Ji wasn’t like any other Bollywood heroine. Her summery cotton sarees and simple braided hair with unruly curls were a rave among educated, urban and working women. Born on November 15, 1947, Vidya started her professional career as a model at the age of 18. She also won the Miss Bombay pageant. She became a household name in 1974 with Basu Chatterjee’s Rajnigandha. Her other notable works include Chhoti Si Baat, Inkaar, Pati, Patni Aur Woh and Safed Jhooth. Sinha Ji also made her mark in television. She acted in serials like Kaavyanjali, Haar Jeet, Ishq Ka Rang Safed and Chandra Nandini. Currently, she was playing the role of a mother in the television serial, Kulfi Kumar Bajewala.

Veteran actress Vidya Sinha, known for films like Rajnigandha and Pati, Patni Aur Woh died at the age of 71 on Thursday (August 15, 2019). Actress Tina Ghai (Zonal Head, CINTAA) had visited Vidya Sinha in CriticCare (Juhu), last Saturday and Sunday. Tina met Vidya's daughter Janhavi Iyer and actress Hetal Yadav in hospital. Hetal told her that Vidya's second husband was still fighting tooth and nail in court with her, "I was told that he wants Vidya's flat, which in turn had made Vidya go into deep stress that 'Mujhe Kuch ho gaya toh Janhavi ka kya hoga". Tina in an Interview with SpotboyE revealed that the Rajnigandha star was in acute pain and discomfort and it was apparent that she won’t survive. She also added, “Not just lung and cardiac, she had developed a liver disorder too.” (Recommended Read:Vivian Dsena's Rumoured Ex, Garima Jain Calls Off Her Engagement Within 2 Months, Reveals Reason) 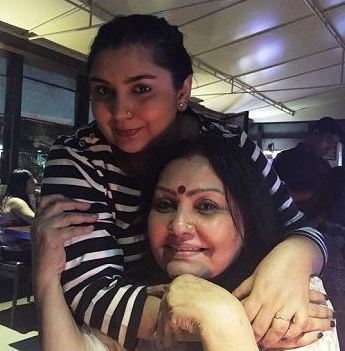 In 1968, Vidya Sinha had gotten married to Venkateshwaran Iyer and had adopted a daughter named Janhavi. After the death of her husband in 1996, she had married Netaji Bhimrao Salunkhe in 2001. She divorced him in 2009 after a difficult relationship. She had also filed a complaint against him of physical and mental torture in January 2009. Later, she won the case. During the interview, Tina told SpotboyE that she held Vidya’s hand and Vidya, in turn, stretched her hand out to put it on Tina's head. "She blessed me and then smiled. I prayed to God that she should get alright and even told her that I will come to see her again. I visited her once more after that, but little did I know that my second visit would be the last one." 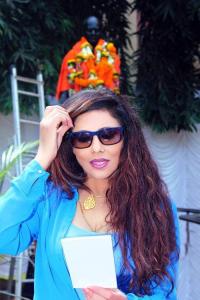 Tina even rushed to be with Janhavi in her moment of crisis on Thursday (August 15, 2019), when Vidya passed away. Tina further said, "Janhavi didn't want any visitors at her house after she took the body home and said that she would prefer her mother's funeral to be a low-key one." She further added, "I even told Janhavi that I could try and arrange for some money to help her out. But Janhavi said that she would manage. She asked me for some time though, saying that she would get back. But now...". (Suggested Read: Khushi Kapoor Twins In Blue With Sister Shanaya Kapoor At Wedding Of Her Mom, Sridevi's Friend's Son)

Amol Palekar, who made his Bollywood debut opposite Vidya Sinha in Rajnigandha, recalled the good times that he had spent with his co-star. In an interview with Mid-Day, Amol Ji had said, "One of the most beautiful memories I have of her is when I had my last painting exhibition in Mumbai. In 2015, Vidya had attended the event. I had done her portrait at that time in the gallery and gifted it to her. She was so thrilled about it. It was a beautiful portrait because the muse was a beautiful person at heart."

The actress starred in several films before calling it quits and settling abroad, although she had returned for a second innings in Bollywood with Bodyguard, much like the 70s, Bollywood had little to offer to her and did not give her films where she could have showcased her immense talent. Bollywood celebs took to their social media handles and expressed their condolences. Actor Bhumi Pednekar had posted on Twitter her condolences and wrote, "Breaks my heart to know that Vidya Sinha ma'am has passed away. My heartfelt condolences to her family and everyone whose life has been touched by her. May her soul rest in peace!". Nightingale Lata Mangeshkar took to Twitter to express her grief and wrote, "Aaj guni abhinetri Vidya Sinha ka swargwas hua ye sunke mujhe bahut dukh hua. Bhagwan unki aatma ko shanti de." which roughly translates to, today I am very sad to hear that the virtuous actress, Vidya Sinha passed away. May her soul rest in peace!." (Must Read: Sara Ali Khan Posts Heartfelt Birthday Wish For Abba, Saif Ali Khan, Reveals How Much She Loves Him) 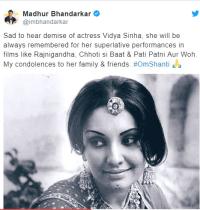 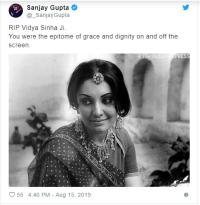 Thank you, Vidya Sinha, for playing wonderful, empowered, and relatable women characters. May your soul rest in peace!.