Vidya Balan stunned in a black and off-white shade saree during the promotion of her upcoming film, 'Jalsa'. However, it was the price tag of her glamorous saree that had caught our attention.

Vidya Balan has made a name for herself with her stunning acting skills and bold statements. But, time and again, she was criticised for her weight and choice of clothes. However, Vidya has made it her plus point and has become one such actress, who loves to flaunt her natural figure. She had made her acting debut in 1995, with the sitcom, Hum Paanch, and since then she has never stopped giving one after another hit film.

The Dirty Picture fame, Vidya Balan, is also famous for her outstanding choice of sarees. She is often seen flaunting her six yards of elegance in different stylish avatars at various public appearances. Currently, she is busy promoting her upcoming film, Jalsa, directed by Suresh Triveni, co-starring Shefali Shah, Manav Kaul and Rohini Hattangadi. But what is capturing our hearts is Vidya's stunning saree looks at many such events. Read on to know more about Vidya's one such surreal saree look. 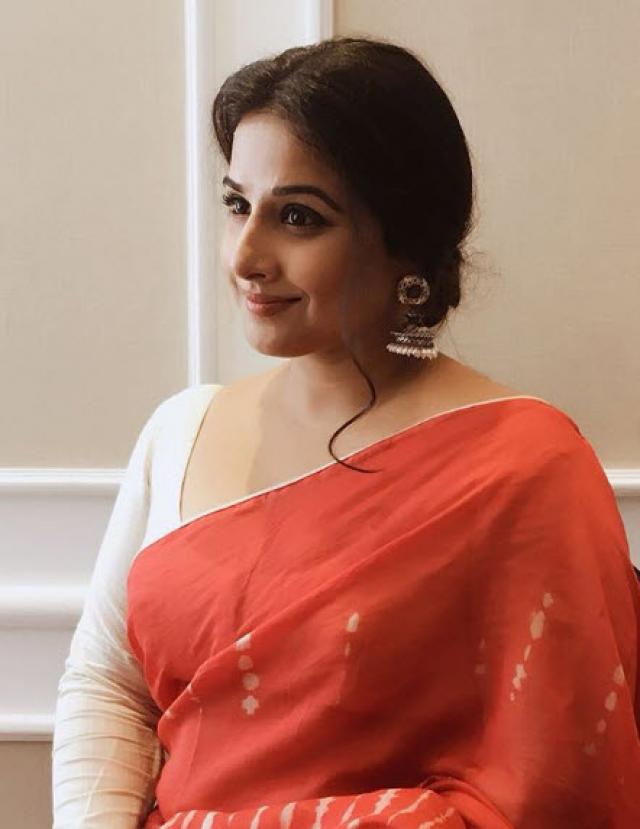 A few hours ago, a media page, Who Wore What When uploaded Vidya Balan’s pictures from her latest look during her upcoming film, Jalsa’s promotions. In the pictures, the bold actress was seen stunning in a Tussar silk saree adorned with Nui shibori print all over it. She paired her gorgeous saree with a black checkered blouse featuring a boat neckline. She teamed her saree with a stunning pair of stud earrings and subtle makeup, which included defined eyebrows, kohl-rimmed eyes, pink lipstick and a neat bun. Check out the pictures: 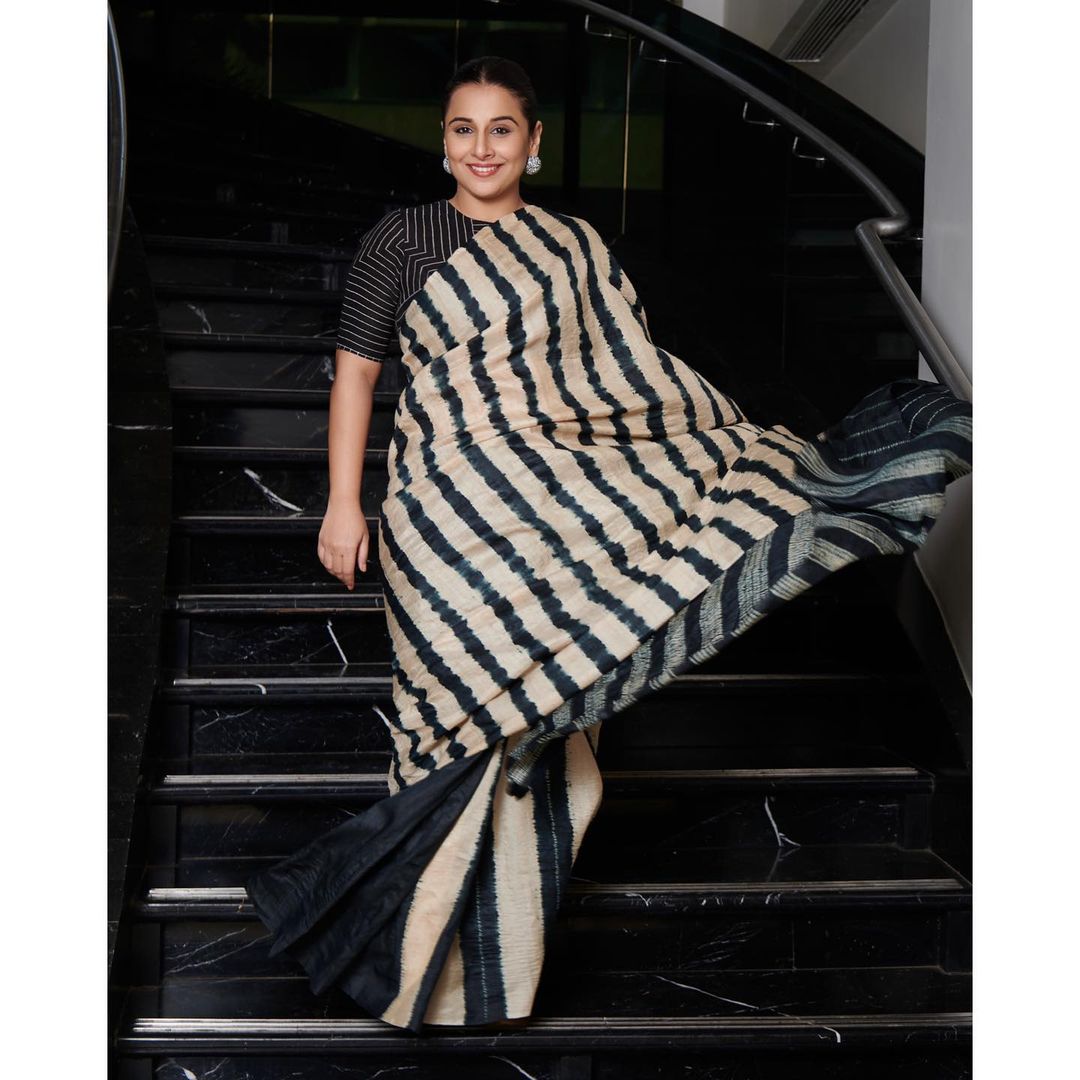 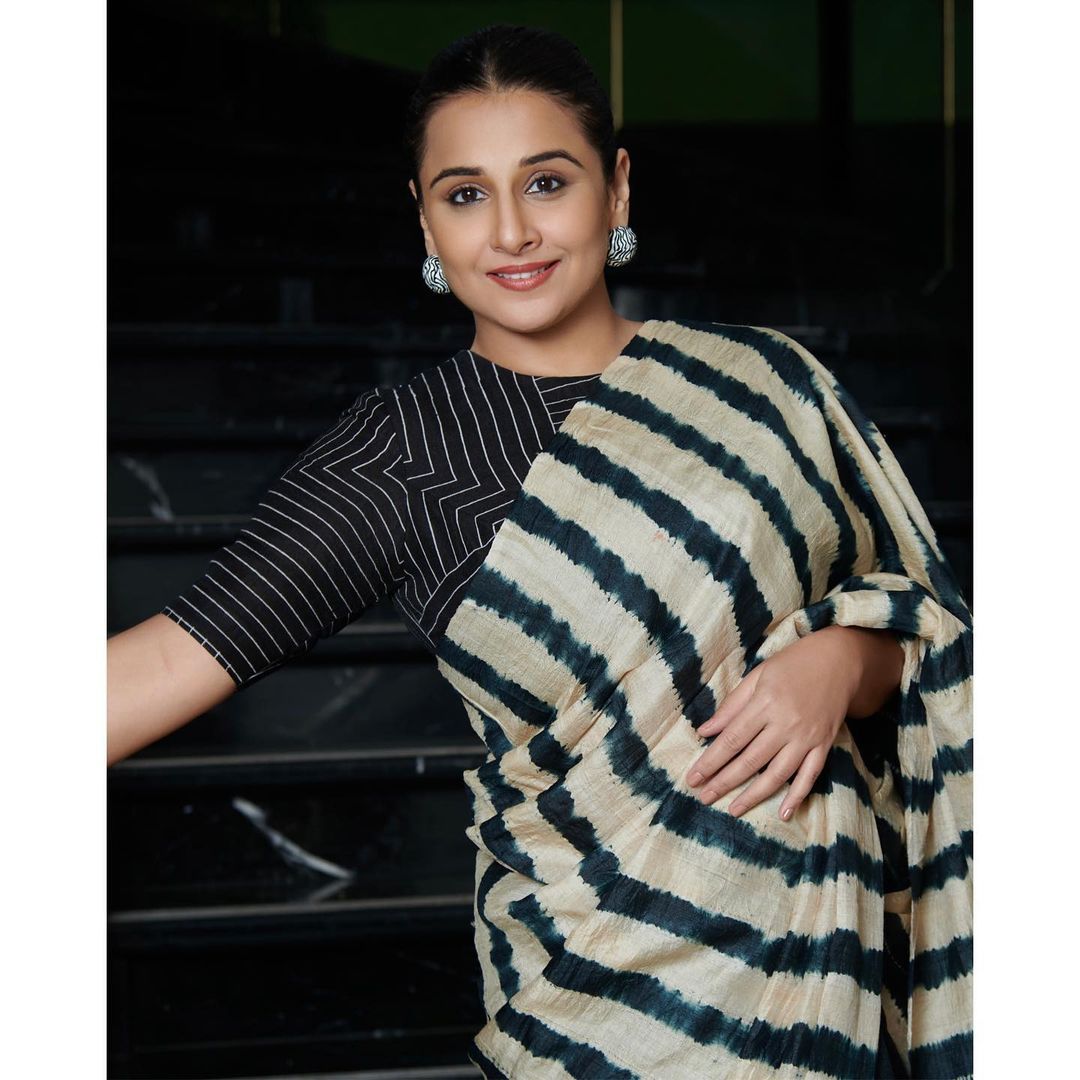 Vidya Balan’s Tussar silk saree is from the brand Studio Medium and is named as Black-Ivory Striped Shibori Saree. The black and off-white shade saree and blouse set are available on the brand’s official website and it is priced at Rs. 32,500.

On February 8, 2022, Vidya Balan's stylists, Pranay Jaitly and Shounak Amonkar had taken to their respective Instagram handle and had shared a series of pictures of the actress flaunting a linen saree from the shelves of the brand, Anavila. She had paired her printed checkered linen saree with a matching maroon-coloured blouse, flaunting her curves while posing for the pictures. 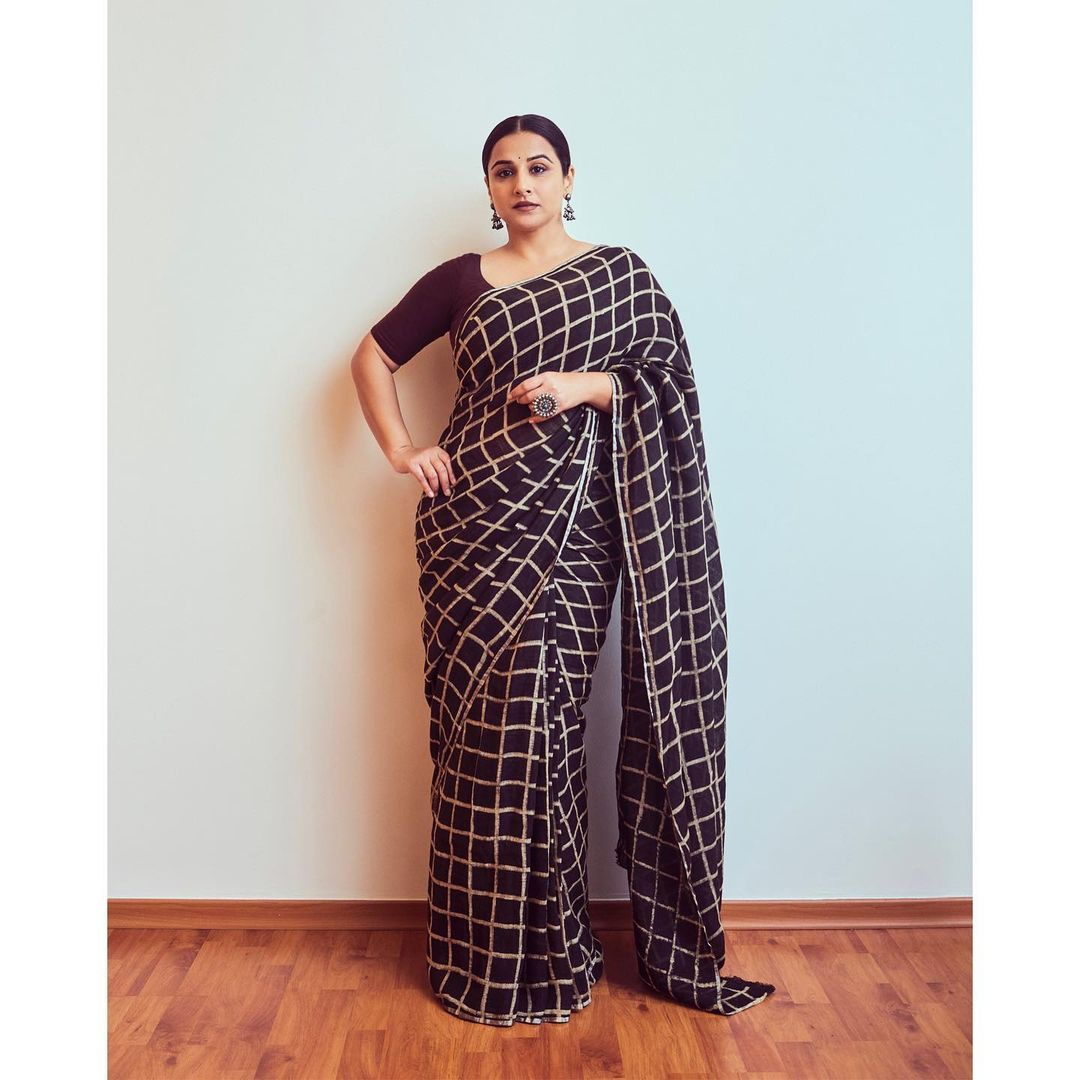 The gorgeousness had accentuated her saree look with minimal use of jewellery that had included oxidised silver earrings and a big oxidised ring adorned with pearls and meenakari designs. She had completed her look with bold makeup by Harshal Jariwala and Shalaka Bhosle. Her makeup had included defined eyebrows, glittery brown eyeshadow, mascara, coffee lips, glowy tone on cheeks and centre parted-neat bun. 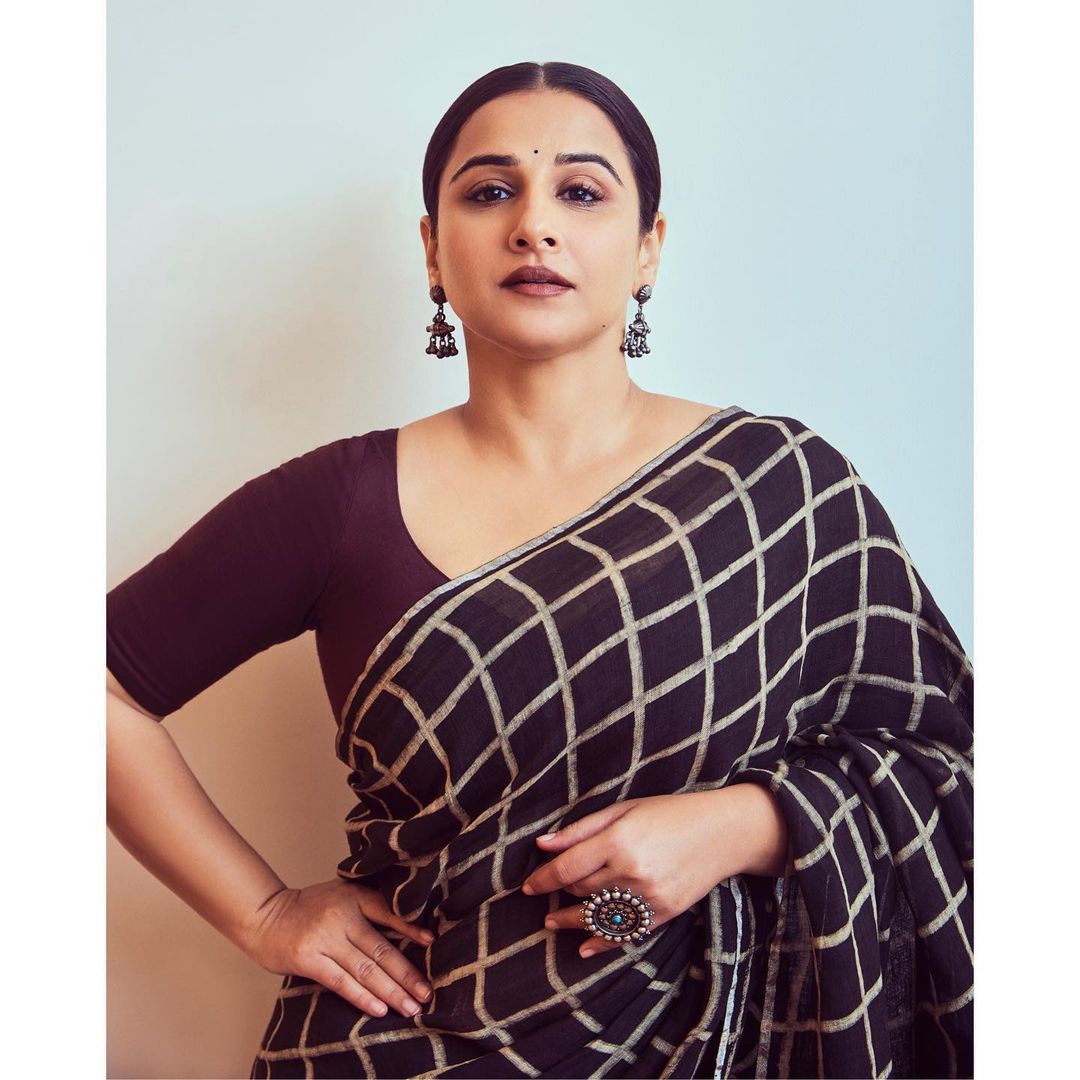 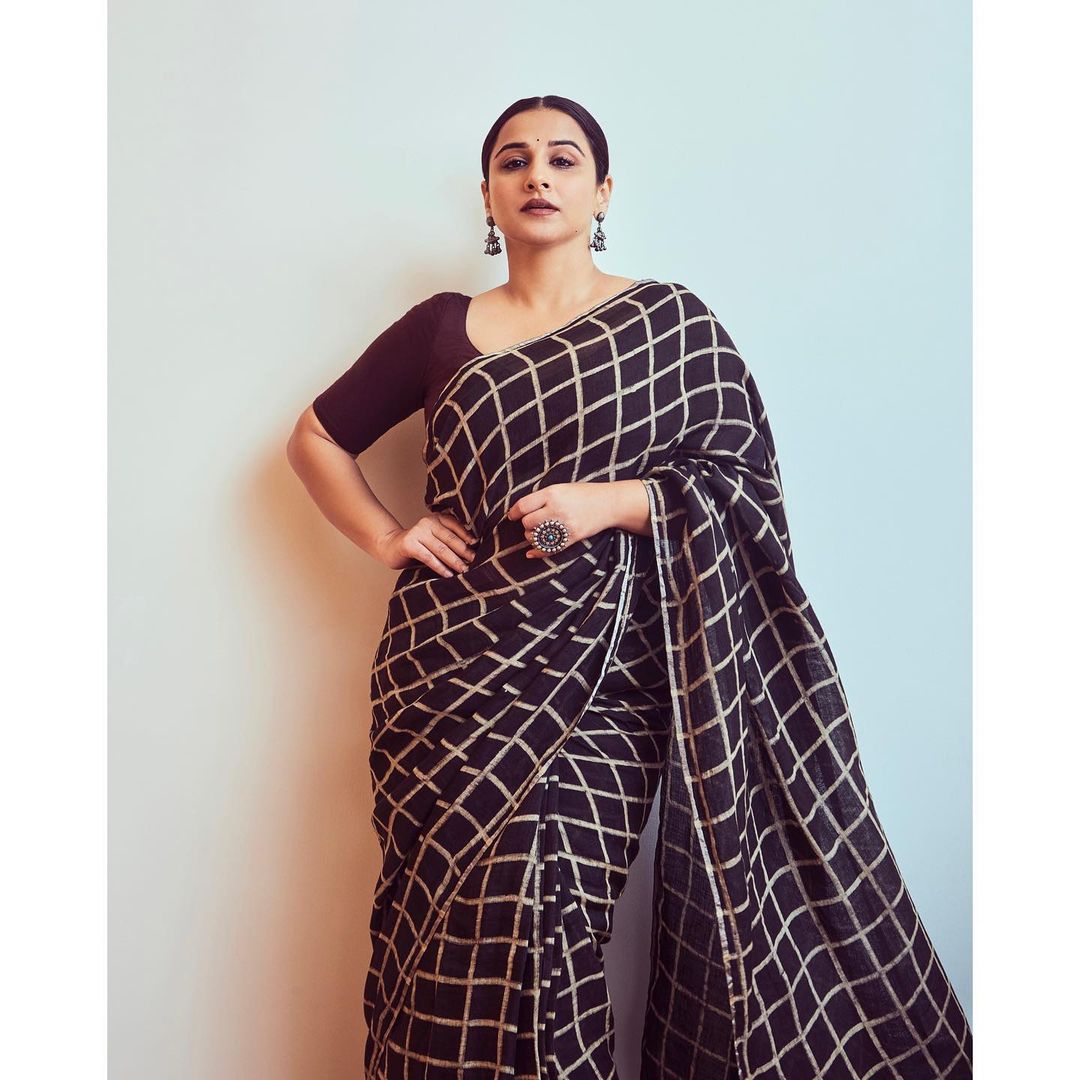 Upon doing some research, we had found Vidya's printed checkered linen saree is available on the brand, Anavila's official website. The elegant yet chic saree was priced at Rs. 18,500.

We loved Vidya's saree. What about you? The Cannes Film Festival is one International forum where eminent names from the worldwide film fraternity come together to exchange ideas, sign contracts, view films and get honoured with prestigious awards. It was first held in 1946, and since then, it has been celebrated in the beautiful city of Cannes in France