'Masaan' fame, Vicky Kaushal's latest picture with mother, Veena Kaushal with a sunset in the background is the most beautiful thing on the internet today. Have a look! Since a very long time, the Bollywood industry hasn’t seen a tall, dark and handsome actor. But it was the year 2015 when our prayers were answered in the name of Vicky Kaushal. The young actor had made everyone his fan by his exceptional acting skills and classic good looks. Vicky Kaushal had made his Bollywood debut with the hit-film, Masaan back in 2015 and had also won the Award for Best Male Debut for the same. However, it was his path-breaking performances in the movies, Raazi and URI: The Surgical Strike that has made him the perfect choice for all the elite filmmakers of the B-town. (Recommended Read: Ruslaan Mumtaz Announces The Name Of 'Chota Baby', Reveals Why It Is Special For Wife, Nirali Mehta)

Well, in recent weeks, we have seen Vicky Kaushal uploading a lot of informative videos and pictures about the on-going coronavirus pandemic. Along with that, the actor had posted some pictures too, about how he is spending time in self-quarantine. Recently, the actor posted a beautiful picture of him along with God’s two beautiful gifts to humanity, one is the nature showcasing a lovely sunset and the other one is his mother, Veena Kaushal. 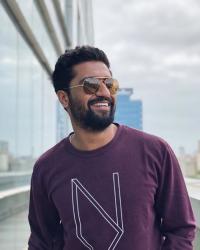 On March 30, 2020, Vicky Kaushal took to his Instagram handle and posted an adorable picture with his mother, Veena Kaushal. In the picture, we can see Vicky having a conversation with his mother, as the mother-son duo have a sweet smile on their faces. Well, it’s hard to miss the amazingly beautiful sunset behind them as it makes this already-beautiful frame an incredible one. Along with the picture, Vicky wrote a small caption that can be read as “Maa-Ae Ni Meriye.” Take a look! (Don't Miss: Karan Johar Shares Cute Video Of Daughter, Roohi And Mom, Hiroo Johar From Their 'High Tea' Moment) 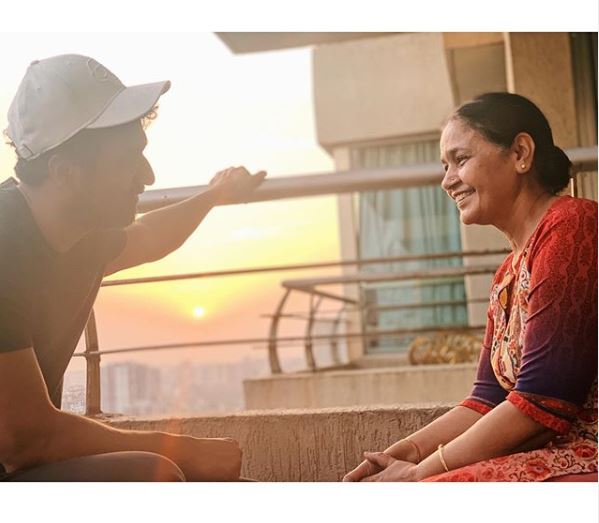 Isn’t this the most beautiful picture on the internet in recent times? Well, the actor has been in headlines not only for his professional success and work commitments. But also for his love life that has been doing rounds on the internet with different actresses. From dating Harleen Sethi to allegedly dating, Huma Qureshi and Bhumi Pednekar, to his recently rumoured girlfriend and Bollywood diva, Katrina Kaif. Well, we have spotted Vicky and Katrina together on numerous occasions already and every time we see them, our heart just wishes for the duo to be together. However, the duo has always denied all these rumours and speculations.

Heading a little back in time, last year on the auspicious festival of Diwali, we saw Katrina Kaif and Vicky Kaushal leaving a Diwali bash together. In the pictures and videos that had gone viral all over the internet, we could see Vicky and Katrina standing outside the house of their mutual friend after the Diwali bash, all decked up in their traditional best. As per a report from The Times of India, Vicky and Katrina had left the bash together but went separately in their respective cars. While Katrina made a statement in a Sabyasachi red-coloured lehenga, Vicky looked handsome in a white-coloured kurta-pyjama. Take a look!

After that Diwali bash party, the rumoured couple were spotted having a casual dinner together in a Mumbai's posh restaurant. Their picture from their perfect dinner date had gone viral like a wildfire on the internet and was winning the hearts of their fans. In the picture, we could see the gorgeous actress wearing a pink-coloured floral dress. On the other hand, Vicky had kept his look casual in a blue shirt which he had teamed with a blue pair of jeans. Take a look! (Also Read: Chahatt Khanna Spends Quality Time With Her Daughters, Zohar And Amaira Amidst The Lockdown)

Well, are you spending time with your mom during this quarantine? Let us know!