It is assumed that Vicky Kaushal has violated the lockdown rules as he tried visiting rumoured girlfriend, Katrina Kaif. The actor has now clarified his stance. Check out his statement inside!

The Coronavirus Pandemic has shut almost the entire world down due to the rapid increase in the cases, and the only cure we have in our hands is to stay at home and maintain social distancing. While India has entered the second phase of the lockdown as it has been extended till May 3, as of now, people are officially losing their calm and cannot wait to step out or meet their friends or go on trips. While like a layman, we think B-town stars are also craving going out and meeting their family and loved ones. As earlier it was Alia Bhatt, who visited her parents amidst the lockdown, and now it is assumed that Vicky Kaushal tried to violate the lockdown as he tried visiting rumoured girlfriend, Katrina Kaif. (Also Read: Milind Soman Reveals How Things Have Changed Post-Marriage With Wife, Ankita Konwar)

For the uninitiated, the Vicky Kaushal-Katrina Kaif dating rumours began when during an award show, Vicky had confessed having a huge crush on Katrina while both were on the stage to present an award. Vicky had said, "Why don't you find a nice boy like Vicky Kaushal and get married to him?" He had further explained, "The season of weddings is on, so I thought, you too would want to do the same and so I thought I ought to ask you." Katrina, who had pretended that she didn't get his point, had asked him, "What?" To which, Vicky had probed, "Mujhse Shaadi Karogi?" with the song playing in the background. Katrina couldn't help but had blushingly replied, "Himmat nahi hai (I don't have the courage)." Now, rumours are on rife that Vicky had tried to violate the lockdown rules by stepping out to sneak into his alleged girlfriend, Katrina’s building, only to be caught by the police and lectured. After all the rumours, the actor has clarified his stance on the same. There are baseless rumours suggesting that I broke the lockdown and got pulled up by the cops. I've not stepped out of my house since the lockdown started. I request people not to heed the rumours. @MumbaiPolice

Talking about the dating rumours, the Bhoot Part One actor, Vicky Kaushal had talked about his dating period in an interview with the Mid-Day. He had said “There are no cons to dating. It's a beautiful feeling.” The actor was then asked about being snapped with Katrina Kaif most of the time, on which he had stated “I understand that the paps are doing their job. I also understand that people have an interest in our personal lives, by the virtue of us being public figures. That's fair. But it's completely up to me if I wish to share. I am not comfortable opening up my personal life for discussion. It's important to me that I guard the good things.” (Recommended Read: Ankita Lokhande Opens Up On Her Marriage Plans With Boyfriend, Vicky Jain, Deets Inside) Katrina had also opened up on her dating rumours with Vicky in an interview with SpotboyE. She had stated, "It doesn't even matter. These rumours are part and parcel of our life. Now I have that maturity to understand all that matters is the work that you do. That's what will make you sustain, that's what the audience loves you for or judge you on. All the rest just comes and goes as these are part of the job. We chose to come into the spotlight. There are a lot of people who hate to come into the spotlight. But that is the nature of being an actor, you have to accept and make peace with public speculation. Some days it will be truthful, some days not truthful." (Don't Miss: Smriti Khanna's Husband, Gautam Gupta Aces His 'Daddy Duties' As He Makes His Baby Girl Sleep) 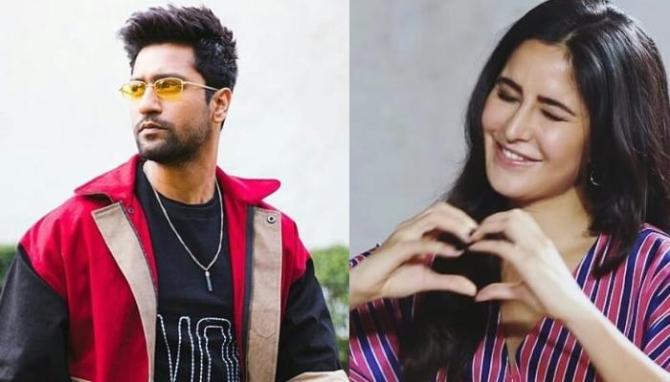 Well, we just hope our celebrities stay at home as they influence a large mass of audience with their actions.