In a world of instant romances, it is our grandparents' love story that touches our heart! And on late legendary actor, Amrish Puri's birth anniversary, his grandson talks about his love life. Since the age of six, we have all dreamt of finding our one true love! And thanks to Bollywood, we became the generation of hopeless romantics, who believes that if a girl looks back, she is definitely in love. However, as we grew up, we realise that Simran might have boarded the train to live with her one true love, Raj, but what happened in the end, no one knows. They might have fallen apart and realised that there love isn't true, but an infatuation. On the other hand, it is our grandparents' love story that aches our heart as they lived together and built a beautiful family. (Recommend Read: Taimur Ali Khan's Playful Mood With Saif Ali Khan And Kareena Kapoor Khan On 'Jawaani Jaaneman' Sets)

And late legendary actor, Amrish Puri, who made us shiver with his voice, had shared an epic love with his wife, Urmila Diveker. While many of us have seen him on the big screen as the villain, not many know about his gentle side and his 'happily ever after' with wife, Urmila Diveker, until death made them apart. He is not with us today, but his roles and his perfect fatherly voice still echos our heart of the entire '90s generation. 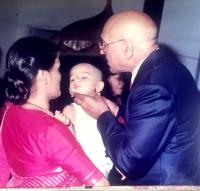 Recently, Amrish Puri's grandson, Vardhan Puri, who is soon going to make his debut in the film industry, shared the other aspect of his personal life and how much he had loved his wife, Urmila Diveker. In an interview with Peeping Moon, he talked about his grandfather's love life, and revealed, "Dadu met Dadi at an insurance company where Dadu used to work as a clerk. They fell in love with each other soon after. But like every love story, even this one had a twist. Dadi was South Indian and Dadu was Punjabi and when their families got to know about their liking for each other, they did not like it and were against their marriage. But soon dadi and dadu convinced their family members and got married with their blessings." (Also Read: Mahhi Vij Wishes Her Adopted Son Rajveer On His Birthday, Shares Unseen Pictures With The Little One) 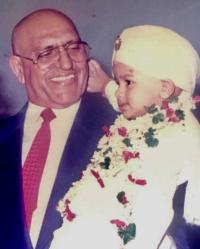 We all know like many of the young actors of his time, Amrish ji too hoped of becoming a hero but instead, he ended up winning the tag of a villain. However, Vardhan shared that his dadi always supported him and stood by him in his days of struggle. He said, "Dadu has struggled a lot in life. He wanted to become a hero but ended up becoming a villain. The one who supported him throughout was my Dadi. When Ddau was struggling in the industry, Dadi used to work overtime to support the family because Dadu became successful at the age of 41. Dadu always used to say 'Mai hero banu ya na banu lekin iss ghar ki hero toh meri biwi hi hai'." 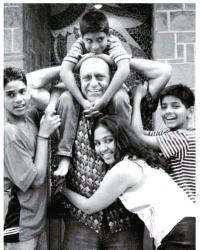 Vardhan also revealed that Amrish ji was an exact opposite of his on-screen characters, and was a perfect family man, and stated, "Dadu used to make sure to spend a lot of time with us. He used to shoot for 18-20 hours but still come home and spend time with us. he used to make us laugh a lot. He used to tell his film dialogues and entertain us. I can never forget that time." 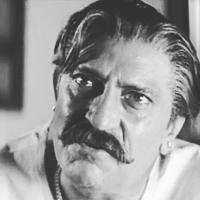 On Amrish ji's 87th birth anniversary, his grandson, Vardhan took to Instagram and penned a heartfelt note and it could be read as, "It’s a thing so rare to take birth in a family that goes down in history because of the craft, hardwork, talent & relentless spirit of one man. I feel blessed to be grandson to a legendary grandfather, a human being par excellence and an artist who the world celebrates. We grandchildren lovingly called him ‘Dadu’. Our granddad fit the bill of a ‘complete man’ to the tee. His paternalistic nature won hearts. He was all-inclusive. He loved, cared for & helped all those he came in touch with." 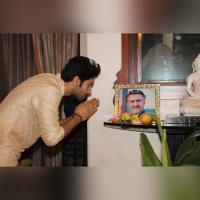 He further wrote, "He was the ultimate father figure. He claimed that the best days of his life were not the days that won him praise or awards but the days his grand children were born. He doted on us. He’d spend time with us, playing, photographing every smile that flashed on our faces and videographed every little nuance of ours. He’d even record every new word we spoke when we were learning to talk as babies. We miss you dadu. Thank you for being you and thank you for blessing and guiding us every day. I know you are with us - I can feel your presence. Love you, Your ‘Tiger’." 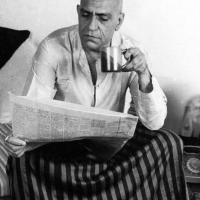 Amrish ji had left a legacy behind for his grandson, Vardhan to live by. In an interview with The Indian Express, he had shared snippets of his childhood, and had said, "Sundays were the best when we used to snuggle in bed inside a quilt and watch classics, Tom and Jerry and Chaplin films together with my dadi, my sister Sachi and my cousins. He was firm yet kind, friendly and gentle. We were never scared of him and were usually at our best behaviour around him." (Don't Miss: Sushant Singh Rajput And Rhea Chakraborty Holidaying Together In Ladakh? Drop Hints On Instagram)

Well, we still remember the charm of 5′ 9″ tall, Amrish ji and his voice that had made us all shiver in the '90s!