Now that Sanjay Dutt and Maanayata Dutt have completed 13 years of their married life, we found some unseen pictures of the couple from their wedding rituals.

Find someone in life to whom you can sing, ‘Dil Tere Bin Kahin Lagta Nahi, Waqt Guzarata Nahin’. Sanjay Dutt found his Mehbooba in Maanayata Dutt and their wedding became Shaadi No. 1 as she had stood by her Saajan throughout the highs and lows of his life. Neither Sanjay’s jail term nor any vitriolic sentiment became an obstacle for Sanjay and Maanayata, and in February 2008, the couple had tied the knot in Goa. Though Maanayata was called an outsider and unworthy of being a part of the Dutt family, who manipulated her way into Sanjay’s life, their relationship had only become stronger with time. Maanayata had brought stability and love in Sanjay’s life and is his strongest pillar of strength. (Also Read: Rare Photo Of Sharmila Tagore And Mansoor Ali Khan Pataudi From Randhir Kapoor And Babita's Wedding)

Just like the old saying goes, the way to a man's heart is through his stomach, Maanayata Dutt knew it just right and she paved her way to Sanjay Dutt’s heart and life by cooking for him. Maanayata was so protective about Sanjay that she used to drop by on the sets of his film with his favourite food. It was her warmth that attracted Sanjay towards her and she was not only cordial with his friends but also managed his personal and professional matters. After two years of courtship, Sanjay and Maanayata had tied the knot as her Hindu rituals and in more than a decade of their married life, the lovebirds were blessed by twins, Shahraan Dutt and Iqra Dutt in 2010. Now that Sanjay Dutt and Maanayata Dutt have completed 13 years of their married life, we found some unseen pictures of the couple from their wedding rituals. For the wedding, Sanjay and Maanayata had twinned as he had opted for a beige coloured sherwani with a contrasting maroon dupatta, his bride had looked graceful in a beige saree with a red dupatta covering her head. Maanayata’s look was accentuated with sindoor, chooda and her huge engagement ring, which everyone had gotten a clear glimpse of when the newly-weds had come out to pose for the paparazzi. Check out the unseen pictures of Sanjay and Maanayata from their wedding ceremony: 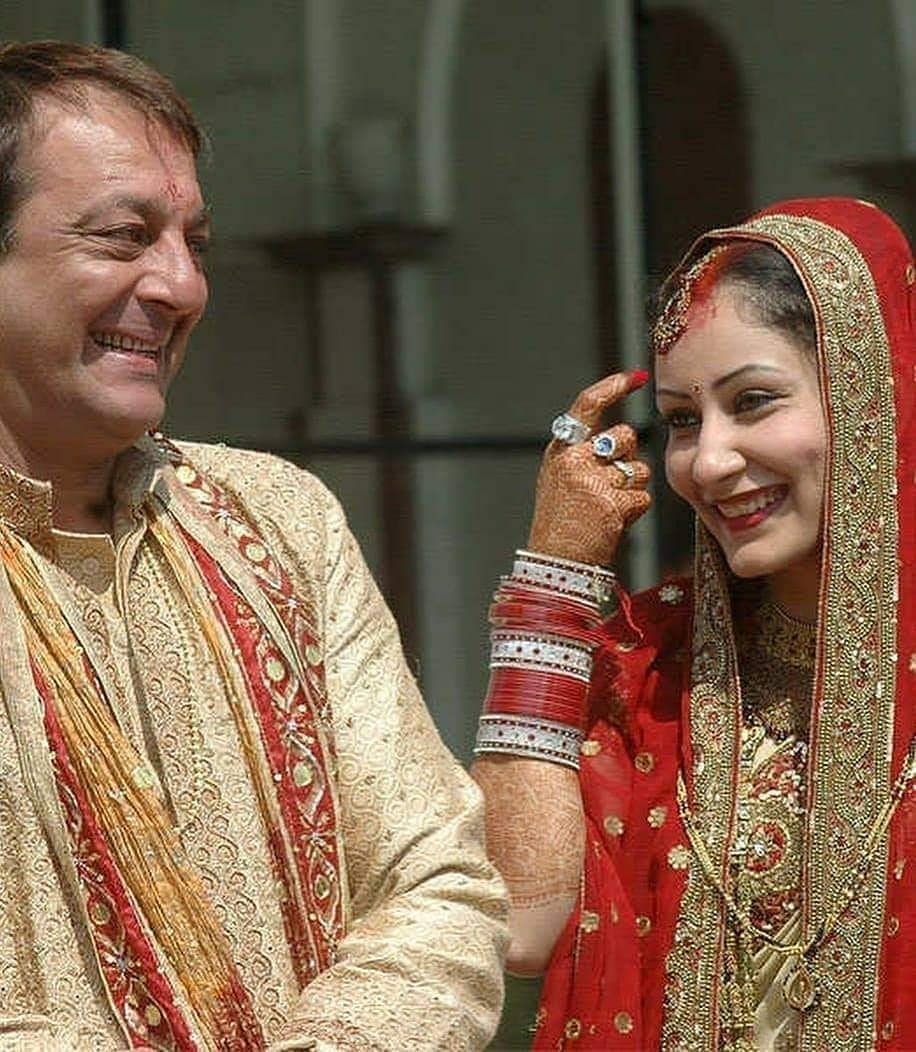 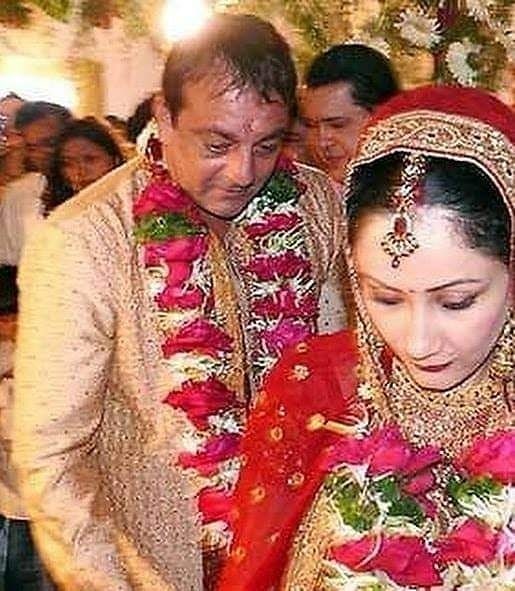 In a 2009 interview with India Today, Maanayata Dutt had spoken about how Sanjay Dutt had brought stability in her life. She was quoted as saying, “Oh yes. I've never been happier. Sanju has stood by me through thick and thin. I've known him for nine years. We started seeing each other seriously in 2005. But he knew my past. So when 'friends' tried to provoke him he just laughed it off. He knew everything about me. When I was going through hell before my marriage, I'd pick up the phone and ask him for help. We're both very positive people and we like to live and let live. We both believe in forgiving. And we believe every saint can have a past. And every sinner can have a future.” (Also Read: Unseen Photo Of Shah Rukh Khan And Gauri Khan As She Flaunts Mangalsutra-Chooda On Wedding Reception) Sanjay Dutt too, had praised Maanayata Dutt for being his support system and the way she has managed his personal and professional life when he was in his jail term. In an interview with the Mumbai Mirror, when Sanjay was asked to comment on his statement that Maanayata had made a home out of his house, he had said, “I’m proud and fortunate to have a wife like her. Her focus has always been home, husband, kids and her work. I’ve never interfered in her trading, knowing she has a business acumen. After my father passed away, Maanayata has been my support system. She never let me fall, she was always there to pick me up.” Maanayata had continued, “For all those who say I am his anchor, I say he is the sail I set up to protect myself from storms. He’s always stood strong for the kids and me. Even when he was inside, he was worried for us.” 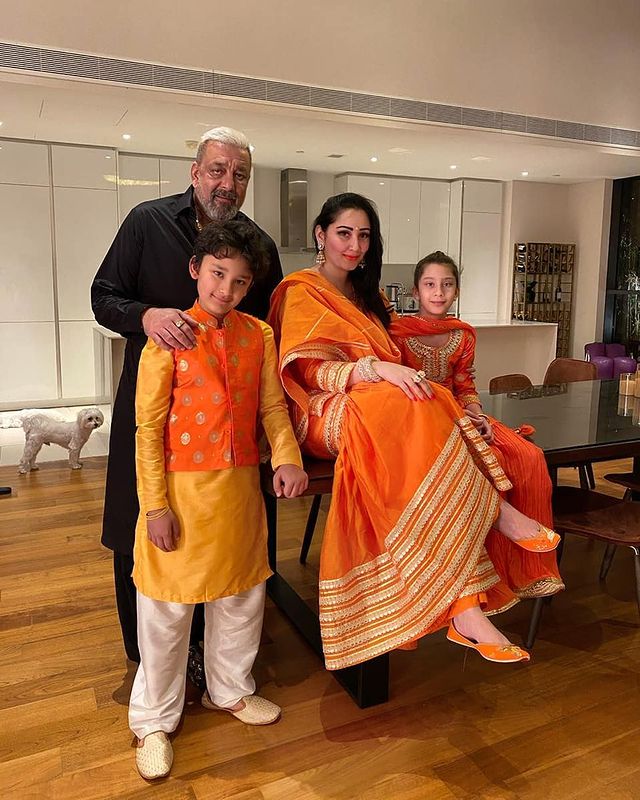 To mark their thirteenth wedding anniversary on February 11, 2021, Sanjay Dutt and Maanayata Dutt had penned heartfelt wishes for each other on social media. While Sanjay had posted a twinning in black picture with Maanayata, she went down the memory lane and shared a lovely unseen picture from one of their post-wedding festivities. Sanjay had captioned his post as “11.02.2008 Loved you then. Love you even more now @maanayata Happy anniversary.” And Maanayata had written, “Another year of fully accepting the dark and the light within each other...another year of holding on together......happy anniversary to my best grip in this world #love #grace #positivity #dutts #throwback #beautifullife #thankyougod.” (Also Read: 10 Bollywood Celeb Couples' First Appearance Post-Wedding As Husband And Wife Is An Overdose Of Love) 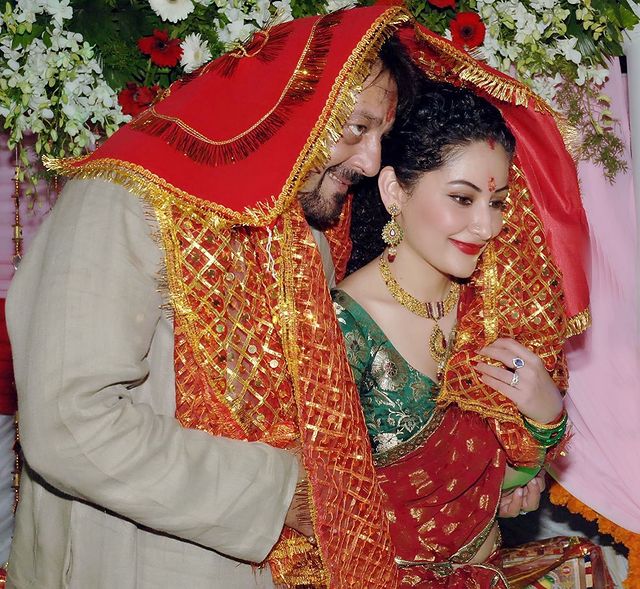 We wish many years of togetherness and love to Sanjay and Maanayata!