On October 23, 2019, Isha Ambani Piramal had turned 28 and it was her first birthday post her marriage. Isha had looked stunning in a pink outfit for her birthday.

Every occasion/ birthday/festival is celebrated in a grand way by the Ambani clan. Everything about the Ambanis is grand, royal, magnificent, exquisite and what not. The Ambanis have, time and again proved how to live life king size and are perfect exemplars of generous and kind. The Ambani kids have also proven that they are not just the ‘Ambani kids’ and have their own identity which is beyond their surname. Akash Ambani, Anand Ambani and Isha Ambani Piramal have chosen their own paths and have been working towards achieving their goals. (Recommended Read: Madhurima Tuli Reveals Reasons For Entering The 'Bigg Boss' House And It's Not Her Ex, Vishal)

Talking specifically about Isha Ambani Piramal here, she was ranked second on Forbes' 'Youngest Billionaire Heiresses' list in 2008. She is an Ivy-League graduate from Yale University, and have been working towards social issues like women empowerment. She is not just an heiress to a vast fortune but is quite passionate about making her own name in the world and have been proving her niche in the business world. Isha had added ‘Piramal’ to her surname after tying the knot with Anand Piramal on December 12, 2018. Isha and Anand’s wedding was a grand affair and was celebrated for over a week, first in Jodhpur and then her residence, Antilia. 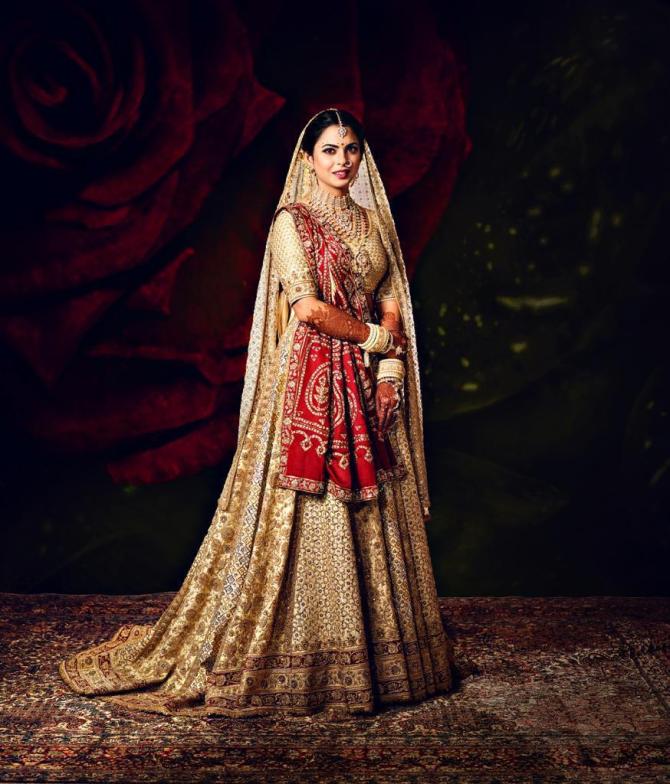 On October 23, 2019, Isha Ambani Piramal had turned a year older and had celebrated her first birthday post-wedding in an unusual way. Netizens wait for the pictures from Ambani celebrations to flood the internet so that they can take glimpses of how grand the occasion was. On October 24, 2019, we stumbled upon a picture of Isha, posing amidst her birthday decor and had looked stunning in a pink coloured dress. In the picture, Isha was all smiles for the camera and we couldn’t afford to miss the glow on her face. Yesterday, while scrolling through our Insta feed, we stumbled upon some unseen pictures of Isha from her birthday celebration with her mother, Nita Ambani. In the pictures, we could see, Isha and Nita trying their hands at painting and were seen happily posing for the camera and showing their paintings' end result. Here are the pictures for you: 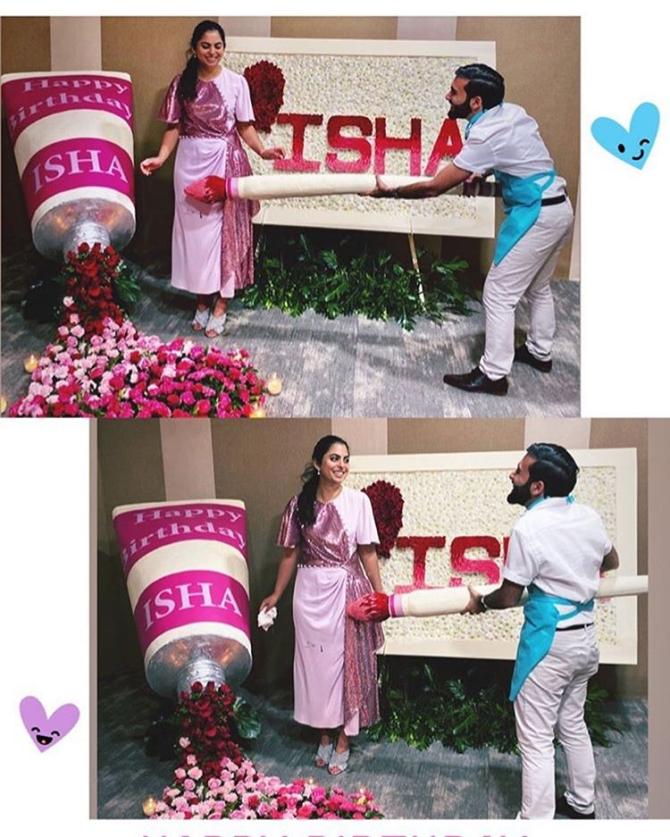 Isha Ambani and Anand Piramal’s wedding was a grand affair and so was the invitation card. The invitation card was very unique as it was packed inside an elaborately designed box with Isha and Anand's initials etched on the top of it. What makes it more worth is the actual surprise which is revealed when the box is opened and there’s a second box stored inside it. As soon as the box is opened, Gayatri Mantra starts playing! Inside the box are four other small boxes, probably made of gold and each of those boxes contained a framed picture of Goddess Gayatri. (Suggested Read: Krushna Abhishek Reveals How Kapil Sharma's Wife, Ginni Chatrath Takes Care Of Them Like A Family)

The official statement by Ambanis and Piramals about Isha and Anand’s wedding could be read as, “We are delighted to share that the marriage of Isha Ambani and Anand Piramal will take place in the residence of Shri Mukesh Ambani and Smt. Nita Ambani in Mumbai with family members and close friends on 12th December 2018. The ceremonies will be performed in accordance with Indian traditions, customs and culture. During the weekend prior to the wedding, the Ambani and Piramal families will host their friends and family in Udaipur, where they are partnering with artisans and craftsmen to integrate local culture and traditions into the festivities. Both families seek the blessings and good wishes of everyone for Isha and Anand as they start their journey of togetherness. Nita and Mukesh Ambani Swati and Ajay Piramal.” 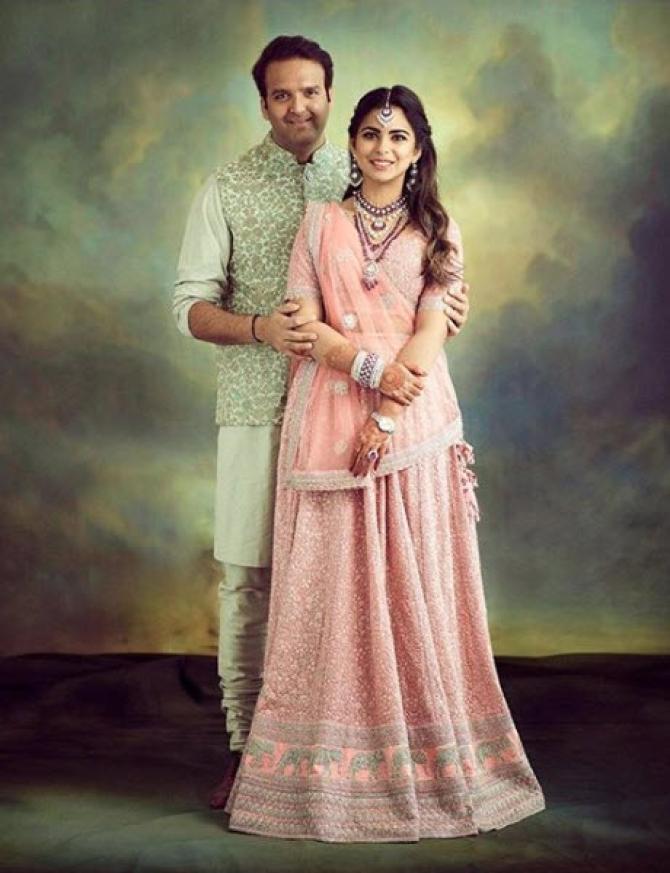 Isha Ambani’s fiance, Anand Piramal is the son of an Indian industrialist, philanthropist and social entrepreneur, Ajay Piramal. He is a graduate from the University of Pennsylvania and also pursued an MBA degree from Harvard Business School. Anand is currently the Executive Director of Piramal Group and is also the founder of a start-up named, Piramal Swasthya, which is basically focused to democratise healthcare. 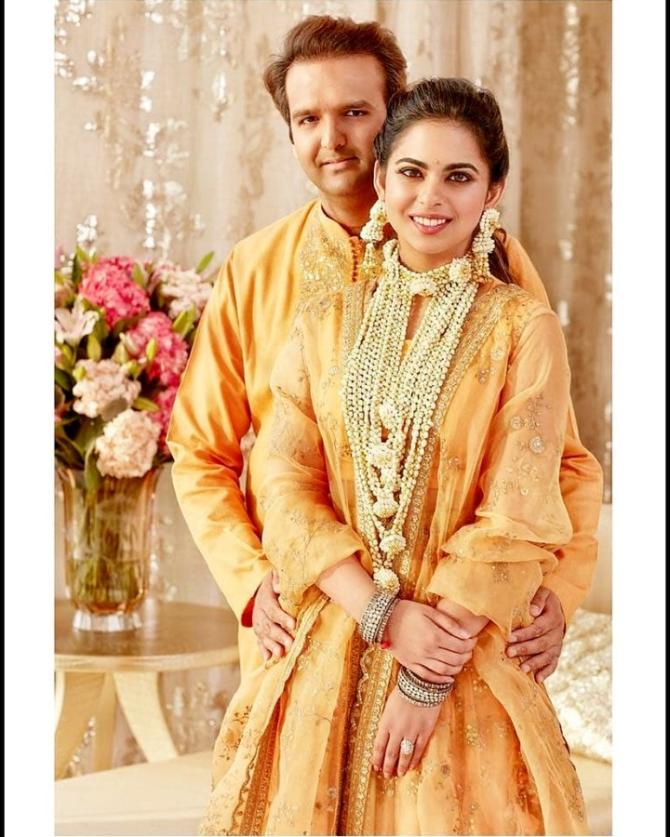 In a post-marriage interview with Vogue, the heiress of Reliance had revealed many important facts from her wedding and of course, her hubby, Anand Piramal. Confessing that they are rather two different souls as a couple, Isha Ambani Piramal had stated, “He hates attending events, I enjoy them. I really enjoyed our wedding, but it was not exactly his idea of fun (laughs). He’s more spiritual than I am. But we are also very similar. We are both very family-oriented, and we both love food. I remember in one of the speeches that my father gave at my wedding, he listed ten reasons why he liked Anand. It was hilarious, and dad concluded by saying that these are probably the same ten things that he would also use to describe himself. And it’s true; in many ways Anand reminds me of my father.” 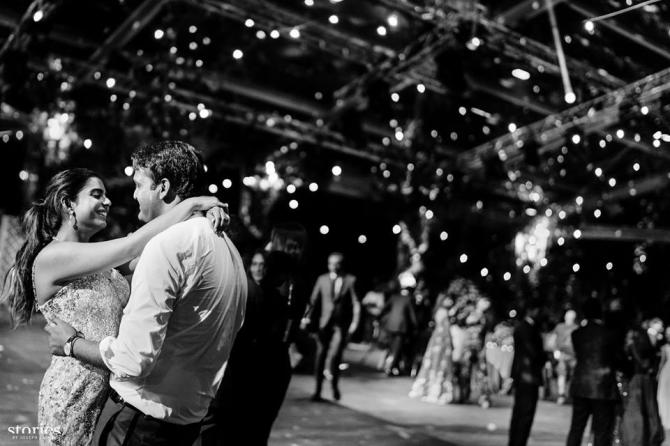 Isha Ambani Piramal had also revealed the reasons that make her hubby, Anand Piramal, a great life partner. She had remarked, “I love his amazing sense of humour and his spirituality.” The newbie bride also shared if the work-life balance has changed after her marriage and had stated, “Last night, we had dinner, and then from 11 pm to 3 am Anand had a meeting in his office. So, I don’t think his life has changed, and neither has mine. At this stage, work is a priority for both of us. And luckily, our parents understand that. Fortunately, the family I was born into and the family I married into have the same work ethic—every member of both families knows the importance of work.” (Must Read: Priyanka Chopra And Hubby, Nick Jonas Complete One Year Of Marital Bliss, Post Wishes For Each Other) We can’t stop drooling over Isha Ambani Piramal’s birthday celebration pictures! What about you?