On March 09, 2019, the Ambanis' eldest son, Akash Ambani took the nuptial plunge with his childhood friend, Shloka Mehta. Here is an unseen picture of Shloka Mehta's bridal avatar from her wedding. 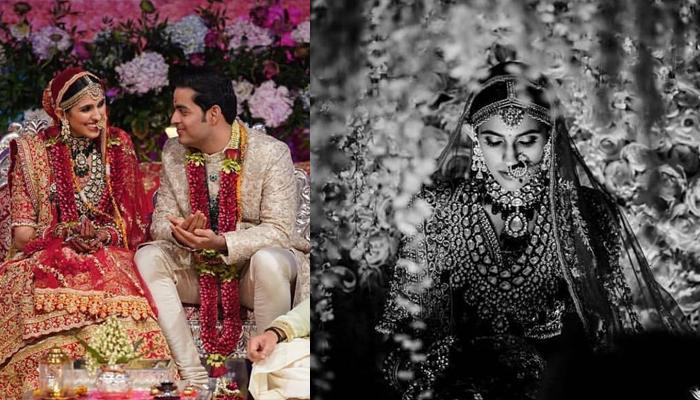 The Ambanis have evidently become an epitome of a grand Indian wedding in the past year, ever since the two weddings that have happened in the family. First, it was Mukesh Ambani and Nita Ambani's darling daughter, Isha Ambani and Anand Piramal's wedding which took place last year on December 12, 2018. Then, four months later, on March 09, 2019, their eldest son, Akash Ambani took the nuptial plunge with his childhood friend, Shloka Mehta. (Suggested Read: Here Is The Truth Behind Saif Ali Khan Lashing At Paparazzi, Calling The Police To Put A Ban On Them)

Akash Ambani and Shloka Mehta's wedding which recently took place was as delightful as it gets. With mesmerising pomp, extravagant pre-wedding festivities starting off in Switzerland and finally tying the nuptial knot in Mumbai amidst the who's who of the town, you can't forget Akash and Shloka's wedding even in a hurry! First of all, it must be mentioned here that Shloka Mehta is the daughter of Russell Mehta and Mona Mehta. Russell is a doyen of the diamond business, who owns the chain- Rosy Blue. Shloka is the director of Rosy Blue Foundation since 2014. In 2015, Shloka became the co-founder of ConnectFor, her own organisation which gathers volunteers for various NGOs running in Mumbai.

It was on March 24, 2018, in a five-star resort in Goa when Shloka Mehta and Akash Ambani had exchanged the rings, and then two months later, a post-engagement party was hosted by the Ambanis at Antilia. The reports about Akash Ambani and Shloka Mehta's wedding had started off last year when a source close to the Ambanis had spilt the beans and had said, “Shloka is a very charming girl, extremely cultured and it’s difficult to say which of the two families is lucky with this upcoming marriage.” (You May Like: Malaika Arora Cannot Keep Calm Seeing Boyfriend, Arjun Kapoor's Film 'India's Most Wanted' Teaser)

Almost 12 months after their Goan engagement, Akash Ambani and Shloka Mehta became each other's forever on March 09, 2019, at Bandra Kurla Complex, Mumbai. About their wedding itinerary, an India Today report had earlier stated, “The Mangal Baaraat will assemble at the Trident in Mumbai at 3.30pm on Saturday. From the Trident, the baaraatis are to leave for the Jio World Centre in Bandra Kurla Complex. High tea will be hosted for the guests at Jio World Centre at 6.30pm on March 9. Akash and Shloka's wedding ceremony will take place at 7.30pm."

Do you know that Shloka Mehta and Akash Ambani had studied in the same school together, and he had proposed her on the last day of their school? Well, Shloka Mehta has been close to the Ambanis since her childhood and clearly, the Ambanis love their newbie bahu like their own daughter. After all, her saas, Nita Ambani had dedicated a poem, title A Story of Love to Akash Ambani and Shloka Mehta on their engagement in 2018.

Nita Ambani's poem could be read as, “They went to Kindergarten to learn ABC, Not knowing — que sera sera —What their future would be… Gummy bears and jujubes, Sparkle pops and jelly beans… Sweetened their lives, From childhood through teens! Till glasses of milk made way for cups of tea… And the Sky fell in love with sweet Chants of glee! From ponytails and Barbies… From pranks and football… The years just blended… And, today they stand tall –With their eyes full of love With one single plea…Their hearts beat in rhythm Singing, “Will you marry me?” Today we bless them, and today we pray: All through their lives, on each golden day, May they always be there holding hands side by side, May Gods shower their blessings on this groom and his bride!” (Don't Miss: Throwback: When Rekha Indirectly Said Rumoured Flame, Amitabh Bachchan Makes Jaya Bachchan Insecure)

How did you like the unseen picture of Shloka Mehta's bridal avatar? Share your thoughts with us! Shloka Mehta - a name we have heard quite a lot in the past year, be it as the badi Ambani bahu or Akash Ambani’s wife. But surely this 29-year-old is much more than just a daughter-in-law of the richest family in Asia. With a baccalaureate in anthropology from the