Second marriages are not a new concept in the glam world and tinsel town. And if there are second marriages, there ought to be step-parent and half-siblings. The relationships in B-town are not easy to decipher. While some are full of love for each other, others seem like they don’t belong together. One such clan who belong from the former category is the kids of the royal family of Pataudi. (Also Read: Unseen Pic Of Pataudi Family Having A Blast At Soha Ali Khan's Wedding, Saif's Expression Is Epic)

Saif Ali Khan fell in love with the quintessential Punjabi kudi of Bollywood, Amrita Singh and despite their massive age gap, their fling led to marriage in October 1991. But after 13 years of blissful married life and two kids, Sara Ali Khan and Ibrahim Khan, the couple separated in 2004. Saif later went on to marry his Tashan co-star, Kareena Kapoor on October 16, 2012, after dating her for five years.

But amongst the star-studded guest list, what caught everyone’s attention was Saif’s children from his first marriage, Sara Ali Khan and Ibrahim Khan too attended their father’s second marriage. Kareena shares a cordial relationship with Sara and Ibrahim and time and again we have seen that bond through pictures or their quotes.

Saif Ali Khan’s sister, Soha Ali Khan recently published her first book, The Perils Of Being Moderately Famous, in which she shared an unseen picture from Saif and Kareena’s wedding. In the unseen wedding pic, we can see Sharmila Tagore, Soha Ali Khan, Saba Ali Khan happily posing with the newly-weds, Saif Ali Khan and Kareena Kapoor Khan. Joining the perfect family picture are Saif’s kids, Sara and Ibrahim, and they were all smiles for the camera. (Also Read: 7 Stepmoms Of Bollywood Who Share A Unique Bond With Their Stepchildren)

Kareena has always maintained that she shares a warm camaraderie with Sara and Ibrahim. In a throwback interview, Kareena talked about Sara’s Bollywood debut and stated, "I am sure she is going to be supremely talented. She has it in her genes. She is looking amazing and gorgeous and I truly believe that with her beauty and talent she is going to rock the industry." She further added, "I am delighted because I think Sara is gorgeous. She is a deadly combination of beauty and brains. We (Saif and I) are excited about her; she is such a brave girl. I am confident that she is going to make a wonderful actor."

On her relationship with Sara, Kareena was quoted as saying, "We're like best friends. Saif refuses to come out with us. She's my bar hopping partner. I enjoy my equation with her." She further continued, "It's pretty amazing, they have a wonderful mother. They are the most well-brought-up children. I always remember Sara standing up and doing adab. Both Sara and Ibrahim are like that. I am like a friend for them. At times me and Sara chat over a glass of champagne. That's the way Saif wanted and that's the way I wanted it. Whenever she wants to call me she does at time when Saif isn't around and she doesn't want to talk to him. She talks to me.” 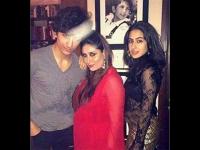 Amrita Singh too clarified the rumours about her having a problem with Kareena’s wrong influence on her kids. Amrita admitted, “I have a problem with the way my daughter dresses? And I resent Sara’s rapport with Kareena? Absolutely untrue! I don’t have any problem with Sara and Kareena’s equation at all. I totally approved of Sara’s attire for Kareena’s party.” Amrita continued, “I’m being hauled over the coals for disapproving of Sara’s outfit for the party. Let me tell you, I was the one who put together the entire wardrobe for my daughter that evening. I also dressed up both my kids, Sara and Ibrahim, for Saif’s wedding with Kareena.”

And when Kareena and Saif hosted their son, Taimur Ali Khan’s first birthday celebrations at Pataudi, people were conspicuous by Sara and Ibrahim’s absence there. As per the source, “Both Saif and Sara are close to Kareena and are often seen partying with Saif and Kareena at their Bandra home, so when Sara and Ibrahim didn’t attend the birthday bash in Pataudi, it took many in B-Town by surprise. Both were spotted at their gyms the whole of last week as they didn’t fly down to Pataudi. But before people start thinking there’s a rift between the brother-sister duo and Saif and Kareena, they will be wrong. Fact is, Sara was prepping with the Kedarnath crew as she has been continuously shooting for the film for over two weeks now. While Taimur’s birthday was on December 20, her schedule was for the next few days after that and her director had wanted Sara to stay back for some workshops. It's a challenging film and Sara is completely focusing on her debut film now.” (Also Read: Step-Brothers And Sisters Of Bollywood And The Unusual Relationship They Share With Each Other)

The source further quoted to a media portal, “Ibrahim is in town on his Christmas vacay as he’s been pursuing further studies in London and he too decided to stay back with his sister in Mumbai as they are very close and spend some time with her. Both Sara and her brother are very close to Saif and Kareena and adore Taimur so if they skipped the bash at Pataudi there is nothing more to read into it.” 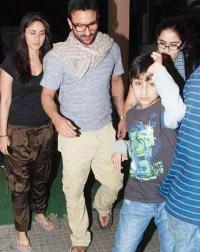 What do you think of this throwback family picture from Saif Ali Khan and Kareena Kapoor Khan’s wedding with Sara Ali Khan and Ibrahim Khan? Do let us know in the comments section below.