A daughter is her mother's best friend and a makeup artist at times. And 'Mrs Funnybones' AKA Twinkle Khanna's daughter, Nitara turned a makeup artist for her and gave her a trending lockdown look. Forget diamonds, in reality, a daughter is her mother's best friend! They share a wonderful relationship from a young age. For a daughter, her mother is the woman she looks up to and hopes to be one day. On the other hand, a mother wishes her daughter to be the best version of herself. They are each other's shopping partner, biggest fans and critics. They know each other inside out and when one gets mad, the other knows how to calm the situation. And an exactly similar bond is shared between Bollywood actress-turned-writer, Twinkle Khanna and her daughter, Nitara. (Recommend Read: Telegu Actor, Nikhil Siddharth Had A Lockdown Wedding With Pallavi Varma In A Private Ceremony)

Twinkle Khanna AKA Mrs Funnybones (her pen name) is a hands-on mommy, who knows what's best for her kids, Aarav Kumar and Nitara Kumar. However, she shares a beautiful relationship with her seven-year-old daughter, Nitara. The diva often shares snippets of her life on her Instagram handle in her own unique way and makes sure to keep her fans entertained and updated. Currently, we all are under lockdown due to COVID-19 outbreak. In the midst of it, kids are the ones, who are finding it hard to pass their time. But the actress' little girl, Nitara is using this time honing her makeup skills and she practices her art on the best model of all time, Twinkle Khanna. 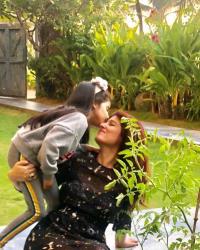 On May 14, 2020, Twinkle took to her Instagram handle and shared a glimpse of Nitara's skills. She posted a picture of herself and shared how her daughter, Nitara is the best makeup artist and can give competition to the ace makeup artist, Namrata Soni. However, we loved Twinkle's brow game as it is a perfect trend during the lockdown. Alongside the picture, the actress-turned-writer wrote, "The little one has given me a fine makeover. Brows on fleek and all that jazz. @namratasoni watch out-you have some serious competition! #grouchomarxeyebrows." Check it out below: 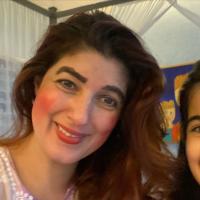 We remember once in a 2017 interview with the Elle magazine, Twinkle had talked about raising her daughter. She had said, "People always focus on their daughters, they teach them to be independent and liberated. But what about raising a feminist son? The best thing is to teach your kids that they each hold a place of value. Gender is irrelevant. But even if I’m speaking a certain language, my daughter’s exposed to other people. Her favourite show at the moment is this Barbie TV show, and when I asked her what she likes about it, she said “Barbie likes to shop.” That’s a terrible show!" (Also Read: Mohena Kumari Singh And Hubby, Suyesh Rawat Bake A Special Cake For 'Bhabhisa' Vasundhra's Birthday) 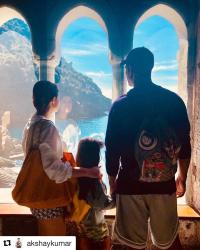 Once in an interview with the Mumbai Mirror, Twinkle Khanna's husband, Akshay Kumar had talked about how difficult it is to babysit his daughter when the writer is away. He had said that his wife (Twinkle Khanna) was once touring in Europe as his son Aarav was in Oxford for a two-week study course. So, he had to babysit his daughter, Nitara and side by side he had to shoot for a film and that's when he had realised that it is hard to take care of a little girl. He had further admired his wife and had stated that he don't know how she multitasks. He had said, "I don't know how she writes, designs, looks after our children and still manages to stay calm on most days.” (Don't Miss: Nityaami Shirke Confirmed Her Breakup Rumours, Says She And Shantanu Are Happy Being 'Just Friends')