Twinkle Khanna Shares A 'Love In The Time Of Corona' Picture With Her 'Bookworm Baby', Nitara

Twinkle Khanna Shares A 'Love In The Time Of Corona' Picture With Her 'Bookworm Baby', Nitara

Twinkle Khanna is a successful writer and a super mother. On March 13, 2020, she shared a monochrome picture of herself with her ‘bookworm baby’, Nitara. A mother shares a warm bond with her kids, be it dealing with their annoying habits or being happily teary-eyed on little achievements. She is the only one, who understands every emotion of her kids and stands like a pillar of strength for them. From the moment she holds her little one in her arms to accompanying them on the first day of their school, our world revolves around our mommies. One such super mom of Bollywood is actress-turned-author, Twinkle Khanna. (Also Read: Kalki Koechlin's Daughter, Sappho Looks Like A Cotton Ball As She's Curled Up In Her Grandma's Arms)

The gorgeous actress, who is known for her wit and humour shares a very warm bond with both her kids, Aarav and Nitara. Twinkle and her superstar husband, Akshay Kumar often share glimpses of their kids on their respective social media handles. From Nitara’s karate moves to Aarav’s cooking skills, the proud momma, Twinkle shares every achievement of her children. She is not just a successful writer but has also aced the game of motherhood by balancing her professional and personal life. The actress-turned-writer, Twinkle Khanna is known for her witty comments and hilarious posts and March 13, 2020, was no different. She took to her Instagram handle and shared a monochrome picture of herself and her daughter, Nitara. The mother-daughter duo was seen reading their respective books. Along with the picture, Twinkle wrote a funny caption that can be read as "There is nothing better than lying down next to each other, engrossed in our own book, but still together. The greed to capture this moment of joy, to preserve it for a stage when memory will invariably be shrouded by the cobwebs of time, was overwhelming #MeAndMine #bookwormbaby #loveinthetimeofcorona."

On January 25, 2020, Twinkle had taken to her Instagram handle and had shared a picture of Nitara engrossed in her book. Along with the picture, she had written, “Rather displeased that I am interrupting her with my paparazzi tactics, I have now been banished to my room! Another tip to turn kids into readers-Let them read what they please instead of deciding what is worthy of reading :) #bookwormlife.” (Also Read: Arjun Kapoor Escorts Malaika Arora To The Car By Holding Her Hand As They Exit From A Friend's Party) 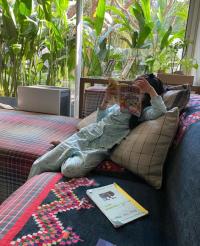 On September 25, 2018, i.e., Nitara’s sixth birthday, her doting daddy had taken to his official Instagram handle to wish her. Akshay had shared a lovely picture of himself with Nitara in a pool. Along with the picture, he had written an adorable caption, that could be read as “My Baby Girl, you have given me Love I didn’t know existed Please don’t grow up just yet I'm not ready for you to swim without me. Happy 6th birthday my Princess.” Not just him, even her gorgeous mumma Twinkle too had wished her on social media. While sharing her dreamy picture with daddy, Twinkle had written, "My little baby is growing up so fast. #Happy6th #birthdaygirl".

In an interview with the Hindustan Times, Akshay had revealed that his little girl, Nitara doesn't like being clicked and had stated, "It breaks my heart to hear my six-year-old daughter says she doesn’t want to come out to dinner with her family because the paparazzi will be there and she doesn’t like the flashing lights. Or Aarav not wanting to come for a movie because he just finished training and he doesn’t want to have to deal with people saying he looks tired or sweaty on Instagram and I really don’t blame them. Us as stars may have signed up for this but until our kids decide to be in any form of limelight after college years, then I don’t think they should be publicly followed or scrutinised, out of safety for them physically and mentally. Again, that’s my opinion and like I teach my kids, it’s your choice whether or not you choose to be offended by what others say." (Also Read: Gul Panag Reused Her Mother's Lehenga For Her Wedding And Mother-In-Law's Outfit For The Sangeet) 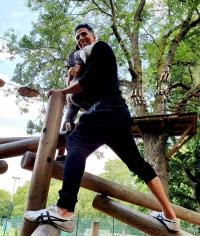 Well, we totally love Twinkle and Nitara’s latest picture! What about you? 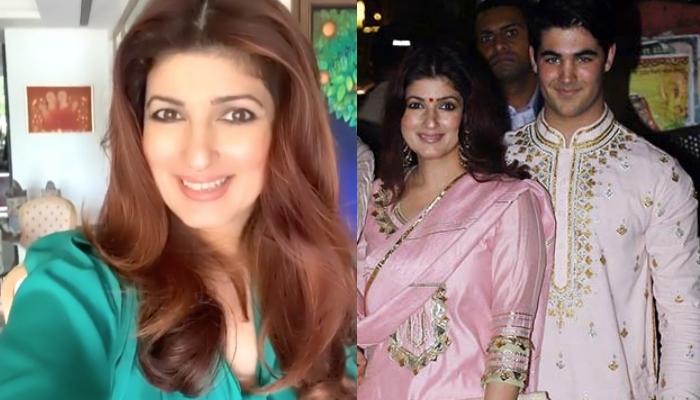 If social media is to be believed, every person is a chef during the lockdown. While we, adults, are struggling to step into the kitchen in this scorching heat and learning to cook for survival, the kids are giving some major culinary goals with their cooking skills. Missing the days of