Gul Panag and Rishi Attari completed 9 years of marital bliss and to mark the occasion, she posted an anniversary wish which was more like a 'flashback Friday', revealing deets of her unique wedding.

So girls, don’t you too look at the price tag of the outfit you liked the most at the store and justify it by saying, “But I’ll wear it more than any other outfit”? But deep down inside you know that you will just gonna wear it twice or maximum thrice! Same is with your wedding lehenga too. You think you’ll reuse it after the wedding too, but never get around to doing it! Some brides, instead of planning to revamp their wedding outfits take the other route and reuse the shaadi ka joda of their mother or mother-in-law. Remember how Kareena Kapoor had revamped her mother-in-law, Sharmila Tagore’s vintage sharara for her nikaah? Now, we have another celebrity, who is added to the list of thoughtful brides and she is none other than Dor fame, Gul Panag. (Also Read: Riteish And Genelia Give Safety Tips As They Workout Wearing Face Masks Amidst Coronavirus Threat)

March 13, 2011, is the day when Gul Panag had tied the knot with her pilot beau, Rishi Attari and since then, their love for each other has only increased with each passing day. Gul and Rishi had kept her pregnancy under the wraps and it was only when their baby boy was 6-month-old, the proud parents had announced his arrival. Before we reveal more about their little one, let us give you a brief about their wedding. Gul and Rishi’s wedding was a memorable affair and the highlight was the bride’s ‘bikers doli’.

Gul Panag, Hubby Rishi Attari And Their Son Nihal Are Dressed Up Like Pilots In First Family Picture

Gul Panag Welcomed Her First Baby Six Months Ago, At The Age Of 39, Shares The First Picture On March 13, 2020, Gul Panag and Rishi Attari completed 9 years of marital bliss and to mark the occasion, the former posted an anniversary wish for her hubby. The anniversary wish was more of like a ‘flashback Friday’ wherein she revealed two most important details of her unique wedding. Sharing the first picture from her wedding, Gul revealed that she revamped her mother’s wedding lehenga for her own. And describing the second picture, Gul shared that she reused her mother-in-law’s wedding outfit for her sangeet. 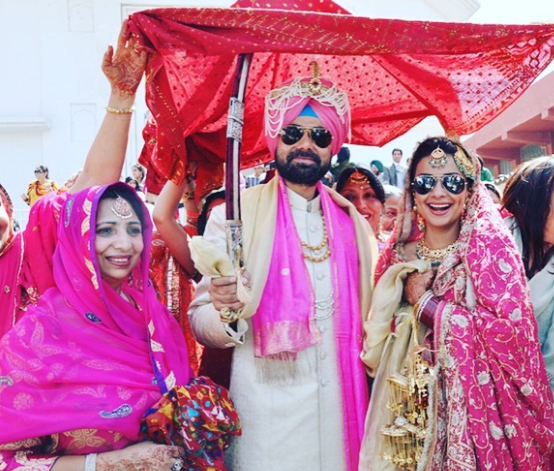 Gul Panag’s caption could be read as “9 years. But actually many more. Wearing my mother’s wedding lehenga- which she wore again at @sherbirpanag & @keeratkular wedding ( same wedding ) 3 months ago. Picture 1. I did not get any ‘wari or daaj’ made. Wore Mother in law’s wedding outfit for our sangeet. Picture 2. (Also featuring HIM and @koel.purie doing a Bhangra meets squat dance off as @shrradha_sidhwani and Dad watch) All recycled and reused. #flashbackfriday #anniversary.” (Also Read: Deepika Padukone Revealed That She Had Caught Her Ex-Boyfriend Cheating On Her) 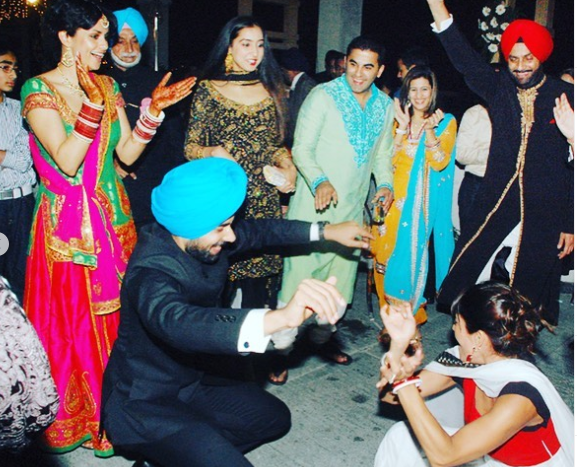 On their 8th anniversary, Gul Panag had revealed how her hubby, Rishi Attari had organised a bikers doli for his bride. Taking a trip down the memory lane and sharing beautiful memories from her wedding, Gul had written, “8 years and counting. I knew I wanted a wedding that was super fun, small and intimate . Had no idea how to go about. Then when we attended @shru2kill and @dontpanic79 ‘s wedding in Goa - we found our inspiration. Our primary goal was to enjoy the wedding with our loved ones. My mother was the ‘wedding planner’ and she executed our vision to perfection featuring every single custom with a fun twist! I wore my mother’s lehnga for the wedding and my mother in law’s for the sangeet.” 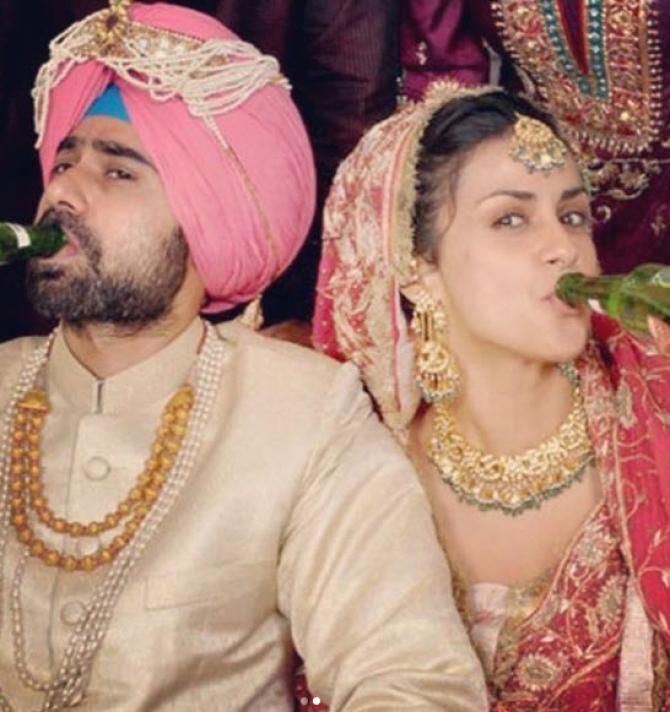 Her wish further stated, “I’m often asked about the doli or ‘getaway vehicle ‘. The initial plan was to go on a bike. Since I was wearing my mother’s lehnga, I was afraid of getting it stuck in the wheel. So the husband found a fabricator in Nangal who made side cars and ordered one. It arrived the night before the wedding. Husband, his brother @rusty_clicks and @sherbirpanag were up all night attaching it to the bike ( it’s quite a task). We then got all our friends and family to ride @royalenfield bikes as part of the procession that included women riders ( @Simrit kaur34 @simranpotnis and my Bhoa their mother, then 65 years old) along with the Doli. This ride was definitely the highlight! More pictures in stories. #anniversary #swipe.” 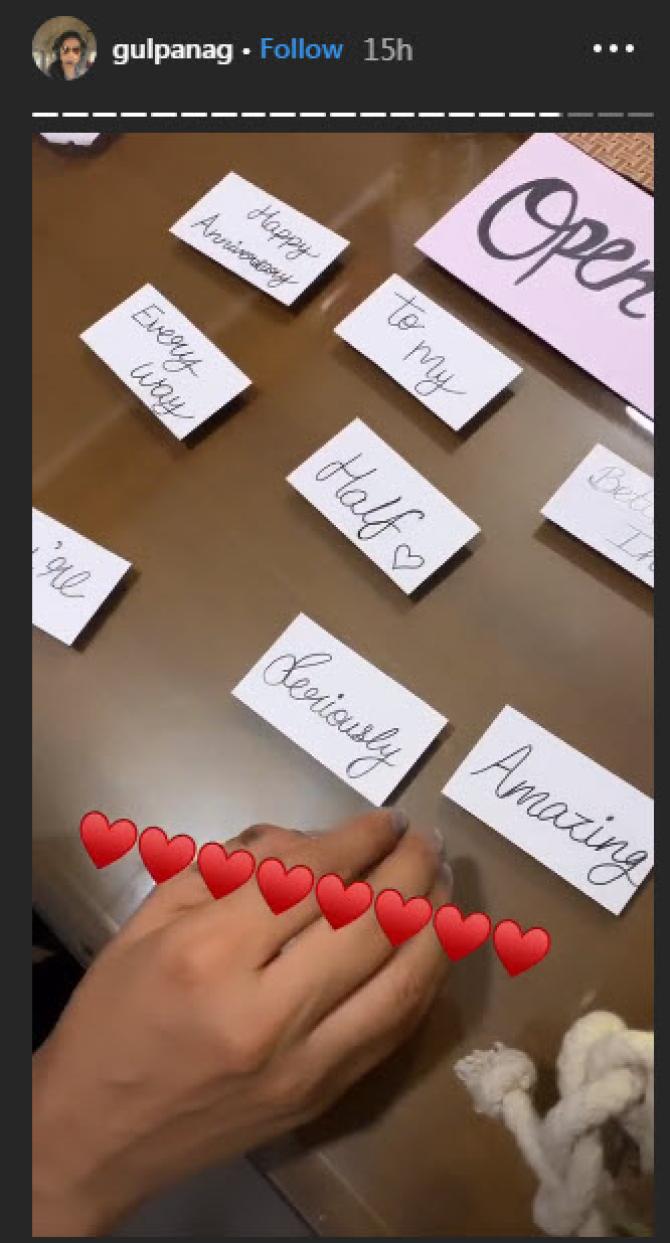 Gul Panag and Rishi Attari had a tough IVF pregnancy with their firstborn, Nihal Singh Panag Attari and it was at the age of 39, when she had embraced motherhood. Gul and Rishi had tried conceiving for a lot of years before they had Nihaal and since he was a premature baby, born at the seventh month, they wanted to protect him sans the unnecessary media attention. Rishi and Gul had involved Nihaal in their road and flight trips and have beautifully made him a part of their adventurous lives. (Also Read: Dipika Kakar Shares A Special Wish For Her Husband, Shoaib Ibrahim's 32nd Birthday) 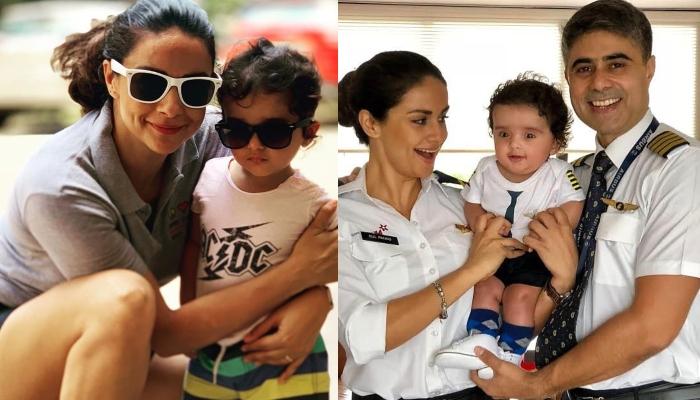 Motherhood is a 24*7 thankless job for which you get paid only with smiles, kisses and lots of giggles. Bollywood actress, Gul Panag had made headlines when she had introduced her six-month-old baby boy, Nihal to the world last year in August. (Recommend Read: Amy Jackson Posts A Bare-Bodied Picture Of Herself

Gul Panag, Hubby Rishi Attari And Their Son Nihal Are Dressed Up Like Pilots In First Family Picture

Gul Panag Welcomed Her First Baby Six Months Ago, At The Age Of 39, Shares The First Picture