There are hundreds of boundaries, limitations and criteria that people generally place on love and marriage. Age, caste, social and financial status and religion; every perspective is weighed well when it comes to love and marriages. However, there are a certain Indian celebrities from our telly world who believe that love is love and they don’t care as to which community their partner or spouse belongs to.

They are soul mates and life partners to each other and give priority to their emotions and feelings in their marital union. As per their perspective, love knows no limits and sees no colour race, caste and creed. Let’s meet those lovebirds who went for an inter-caste marriage and for whom the commitment to each other is what matters the most. So, here are a few inter-caste TV celebrity weddings: 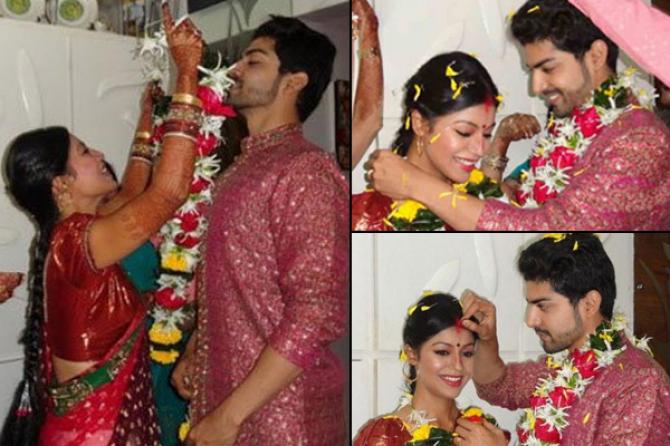 This Ram-Sita jodi of Debina and Gurmeet is one of the most famous ones from the small screen. They have truly and madly been in love with each other ever since they met. Even though they hail from different caste and background, they share the heart-to-heart bond. Cupid struck when they came together as co-stars in Ramayan and they never looked back. However, there were challenging circumstances and the things weren’t that easy. They took their friendship and love affair a step ahead by culminating it into marriage. The Bengali beauty and the guy from Bihar together conquered it by having a clandestine marriage in 2006. However, the world knows that they got married in 2011. 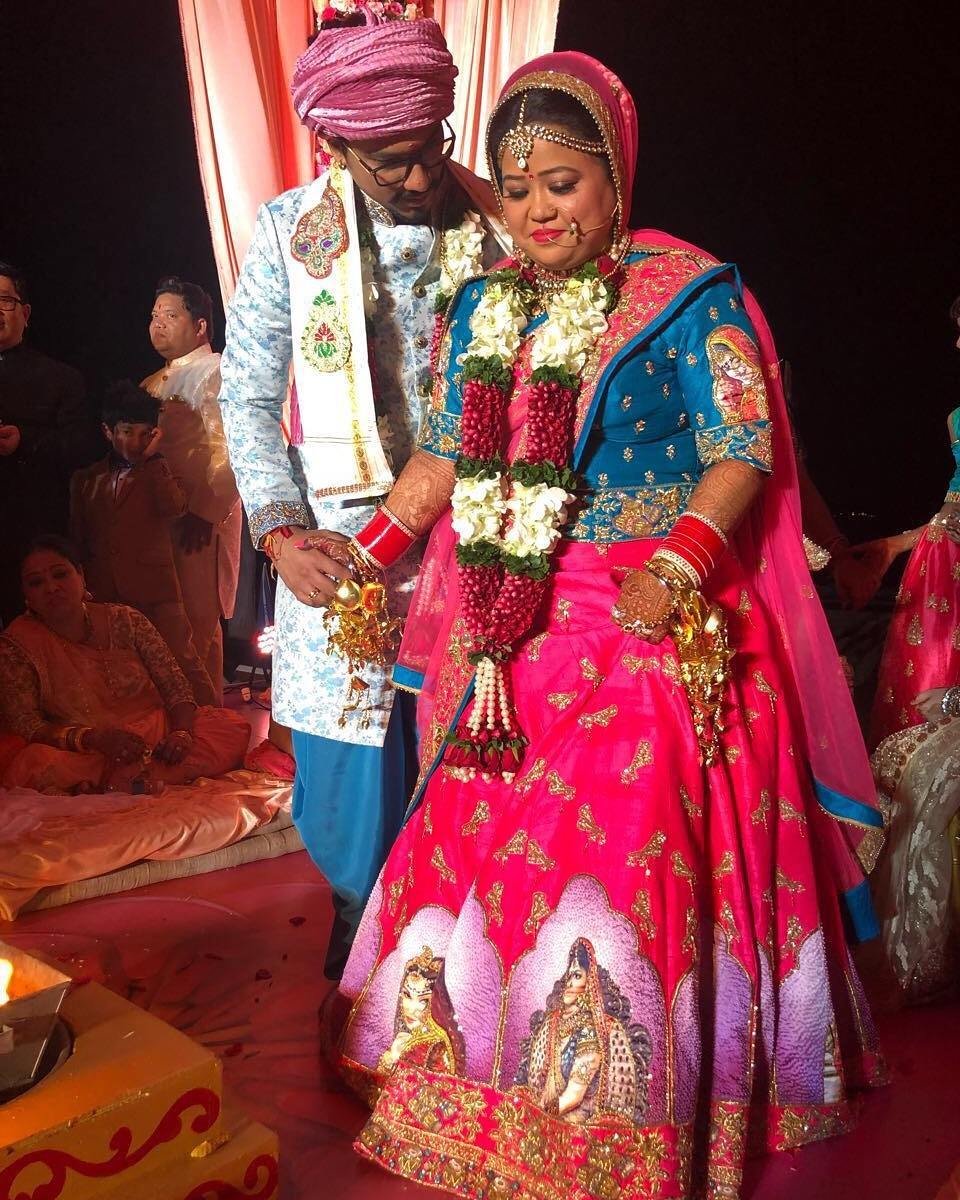 Bharti Singh, the household name and a cult comedian icon too challenged the practices and customs of her country. She has recently gotten married to writer and storyteller Haarsh Limbachiyaa who belongs to a different caste. Despite the prevailing caste systems in society, the very much in love couple pushed their relationship forward and got married on December 03, 2017. The damsel bride Bharti and dapper groom Haarsh caught the eyeballs on their wedding with their graceful and traditional presence. No wonder the bindaas babe has set an example that nothing can set apart the true love on this earth.

You May Like: From Pool Party To Reception, Bharti Singh's All Wedding Functions Looks 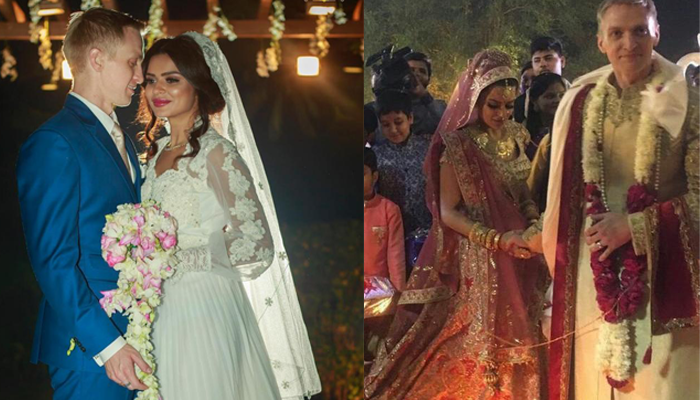 This couple was not only adorably inspiring on their wedding day for their appearances but also stood as an outstanding modern couple with the incredible power of love. Aashka being an Indian and Brent an American; the couple could have easily hit skids. But fortunately their bond and the connection of heart was respected and they did not face any dire situations. Sultry beauty Aashka looked straight from a fairytale wedding in Brent Goble’s mum’s marital gown. The couple tied the knots in Hindu as well as Christian style. The traditional Hindu wedding was held in Ahmedabad. So, apart from their wedding on December 03, 2017, the couple also celebrated their culture, traditions and a beautiful bond.

Don't Forget: 'Royal With Elegance' Bridal Looks Of Aashka Goradia That Brides-To-Be Can Get Inspire From 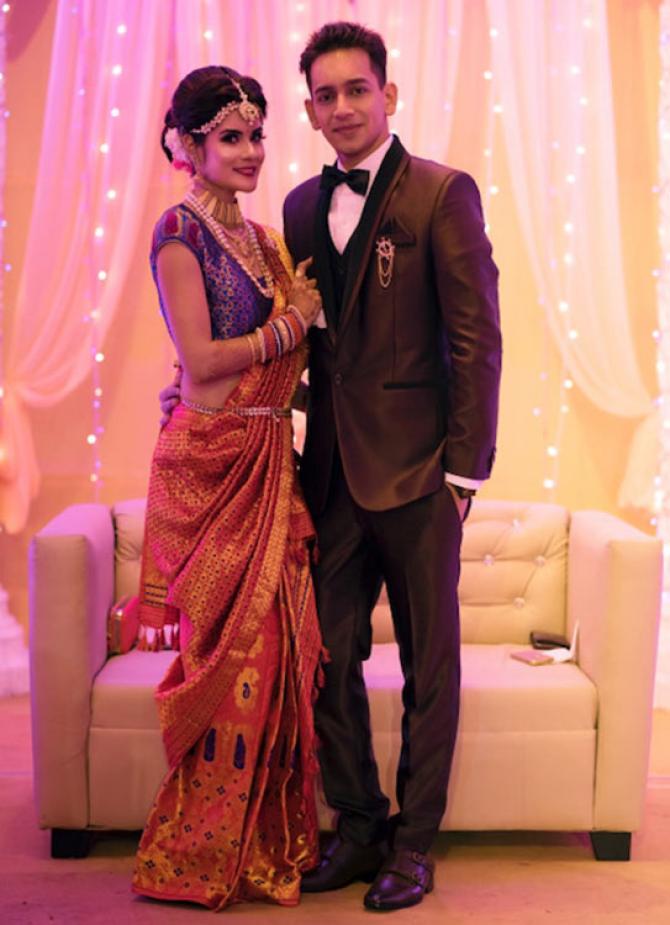 Another duo who fell in love and married outside one’s community is Shamin Mannan and Atul Kumar. Shamin looked beyond their cultural differences and decided to spend her life with her long-time boyfriend, Atul. Sanskaar- Dharohar Apno Ki actress who was also seen as a debutant in Bollywood’s Love Shagun married her boyfriend in Assam in presence of her family and friends. As a couple, they wanted to practice both the religions with equal fervour and for that, they went for a Nikaah ceremony as well as Hindu wedding. So, we see how the lovely couple exemplifies equality in their fairytale love story. 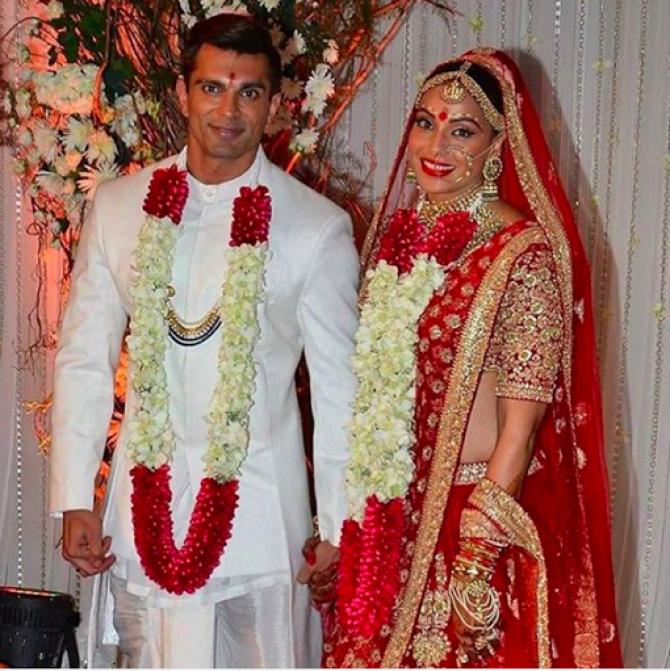 The next we have is telly land’s stud Karan Grover and Bollywood’s dusky beauty Bipasha. The daring couple did not allow any caste and cultural reasons to become a hindrance to their love and marital journey. Their extravagant wedding saw a blend of Punjabi as well Bengali culture. Karan Singh Grover has three marriages till date, including the one with sultry actress Bipasha. The couple together is happily spending their journey of life. 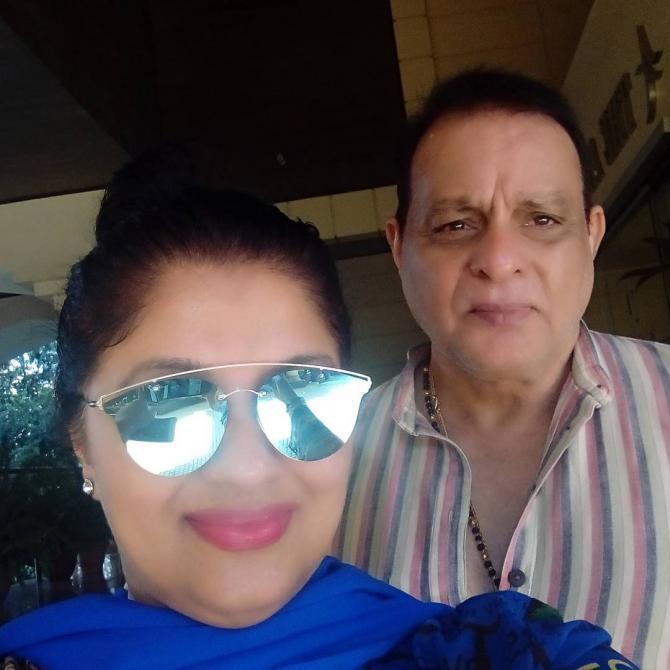 Ramola Sikand, the iconic vampire of Indian television has an inspiring and amazing love story with director Ravi Dang. Love was the only religion for Tamilian girl Sudha and Punjabi guy Ravi. They took a bold step in love, eloped to get married and went against the rules of society. It was love at first sight for the brave couple and they did not hesitate to make their love-story culminate into marriage despite cultural barriers. 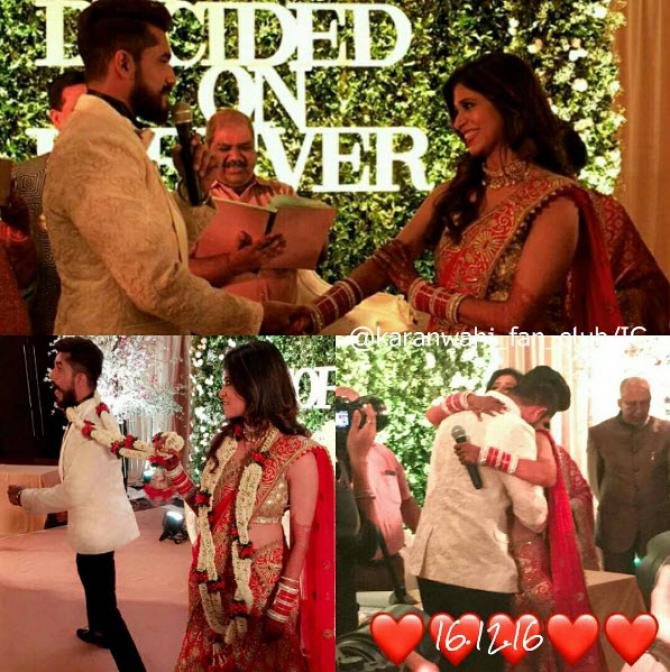 The young and recently married TV couple are a source of strength and inspiration for all the couples in love. They chose to fall in love outside their community which is generally objected in typical Indian society. Suyyash Rai is Punjabi who has married Kishwer is a Muslim. The couple went for a simple registered marriage in court and had a private ceremony. The courageous couple has set a good example for ignoring the age-old principles. For Dipika Kakkar and Shoaib Ibrahim, love and marriage are all about being with the right person. It was compatibility and not the community that they took into account for their matrimony. Regardless of the caste and cultural criteria, their union is remarkable and praiseworthy. It started off on the sets of Sasural Simar Ka and their courtship began. Dipika hails from a Hindu family whereas Shoaib is from a Muslim background. The couple is not afraid as to what society will say. They are happily enjoying their relationship after tying the knots on February 22nd, 2017. There were rumours that Dipika converted to Islam but she has put those to rest with a denial. For the wonderful couple Aamna Sharif and Amit Kapoor, the benchmarks for their relationship included loyalty, love and affection rather than community and religion. Kahin to Hoga actress Aamna got hitched to distributor-turned-producer Amit on December 27, 2013. Their decision of a lifetime was based on pure love and feelings and not the illogical caste and creed system. Aamna's parents too had an inter-faith marriage. While her father is an Indian, her mother is a Persian-Bahraini. Aamna’s husband Amit is a typical Punjabi guy. 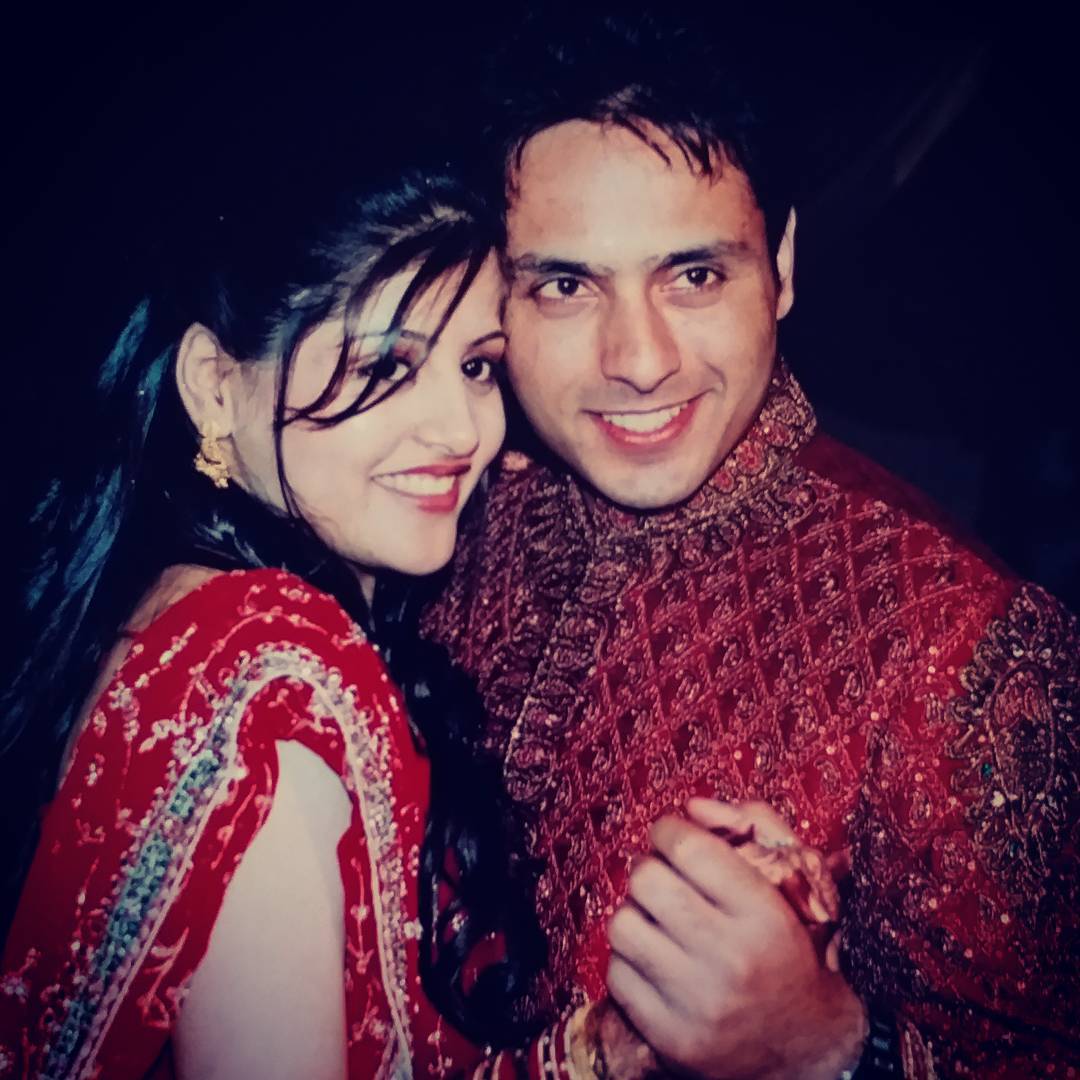 This couple never bothered about the senseless criteria of marriage. Iqbal Khan, known as the Khan of telly world first met Sneha Chhabra in the city Hyderabad, where they shot for Falguni Pathak's music video Main Teri Deewani Hoon. Years later, the couple met again and casually exchanged their contacts. Slowly and steadily, the simple friendship took a drastic twist and today they are husband and wife. The union only became possible because they married for love and not for satisfying the norms society has created. 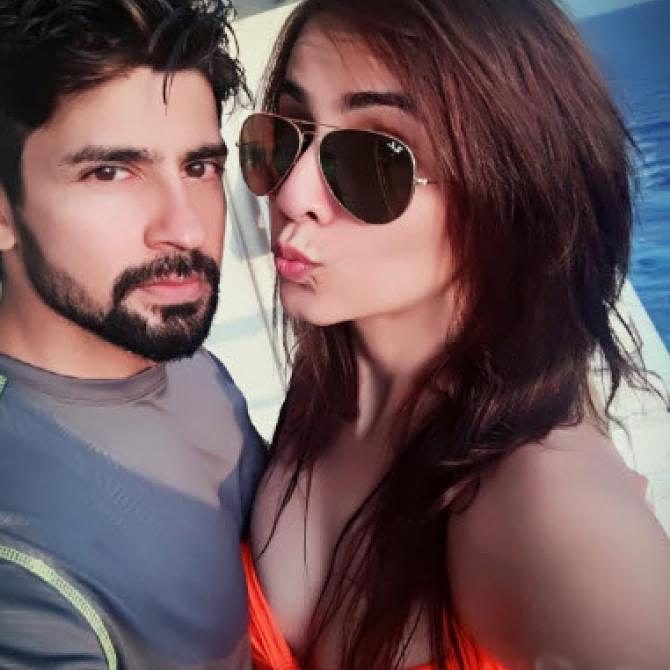 Love and emotions were essential components for Hussain and Tina who belong to different communities. They did not give up on their love and choice just because of continuation of the caste. They met while studying in college and after a courtship of nine years, Tina and Hussain decided to tie the knots in mixed style. They followed Hindu as well as Muslim traditions in their wedding ceremonies.

These celebrities are not just actors or couples but they are flag bearers who promote the idea of equality and inter-caste marriage. Rather than facing the stigma of the caste system and becoming the victims; they have destroyed the idea called casteism in marriages. By marrying the partner of their choice, they prove that love does not consider any boundaries to be crossed. 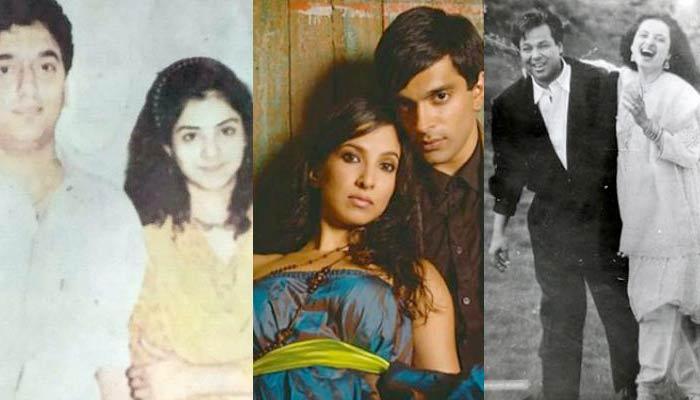 Marriages do not seem to last too long nowadays. This is especially true when it comes to Bollywood. ‘Till death do us part’ is a phrase that is now long forgotten. While this, of course, is not true for a lot of couples who are happily married and have been