Famous television actress, Hina Khan and Rocky Jaiswal make for one of the power couples from the small screen. Checkout Hina's sweet and lovely note for Rocky!

Whether you have been married for decades or are in a brand-new relationship, to keep the spark of love alive, soulmates must indulge in some sweet nothings. Whether it is about planning a surprise out of nowhere or simply saying, ‘I love you’ once in a while, all this is surely going to bring a smile on your partner’s face. Television beauty, Hina Khan and her longtime beau, Rocky Jaiswal are well-aware of the same and know how to make each other feel loved and special.

To substantiate, Rocky’s proposal for Hina was a little hatke as the former had popped the question to the latter on national television when she was inside the Bigg Boss 11 house. Just like any other girl would have gotten wooed with the lovely gesture, Hina too felt extremely special by this. Now if you are wondering if their shaadi is gonna happen soon, then you are wrong, for the actress herself had revealed that they are not in a hurry. (You May Like: Rishi Kapoor Can't Thank Neetu Kapoor Enough For Being His Rock During The Cancer Treatment) 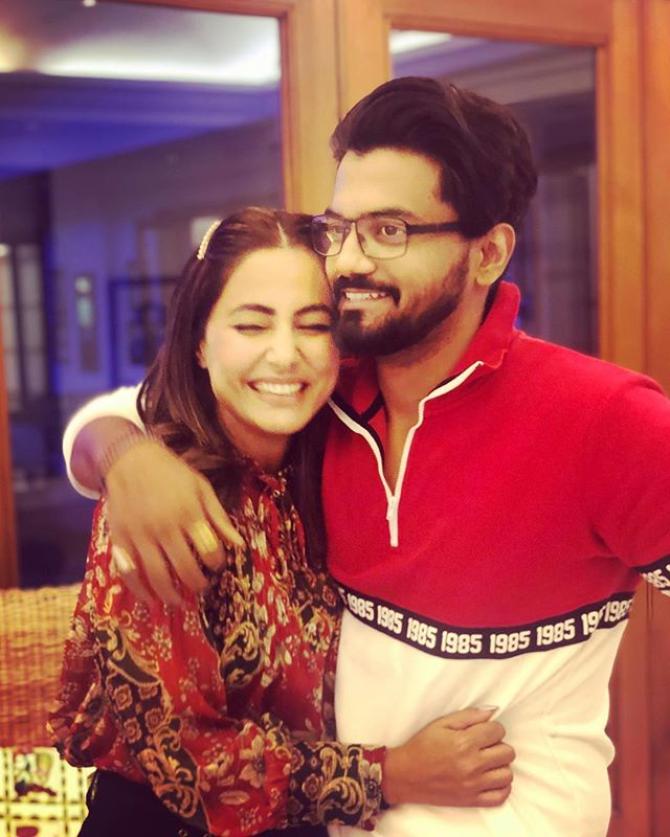 While we will have to wait for Hina and Rocky’s 'big day', the two have already been painting the town red with their mushy messages, notes and shaayaris on social media. Hina is very much alive on social media and regularly updates her Instagram posts and stories. Today, on August 21, 2019, Hina took to her Insta story and shared a note that stated, “Imagine finding both love and friendship in one person.” The actress dedicated the same to her beau, Rocky by tagging him for she has found both love and friendship in him. And now we know why their relationship is so strong! Checkout Hina’s Instagram story right here: 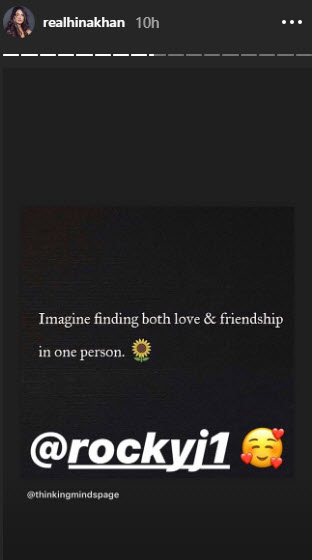 Hina Khan and Rocky Jasiwal’s PDA is known to many! For instance, a few days back, on August 8, 2019, Hina had shared throwback pictures, which seemed to be from their Cannes 2019 days. In one of the pictures, we can see the two giving each other a tight hug, atop which she had written, “The way we hold each other. Don’t want this moment to end ever. I love you @rockyj1.” To which, Rocky had reposted and replied with “Me too!” followed by a heart emoji. In the second story Hina had penned, “YOU OWN MY HEART @rockyj1.”  To which Rocky had replied by reposting and writing, “And you have mine". Here you go with the snapshots in case you missed them: 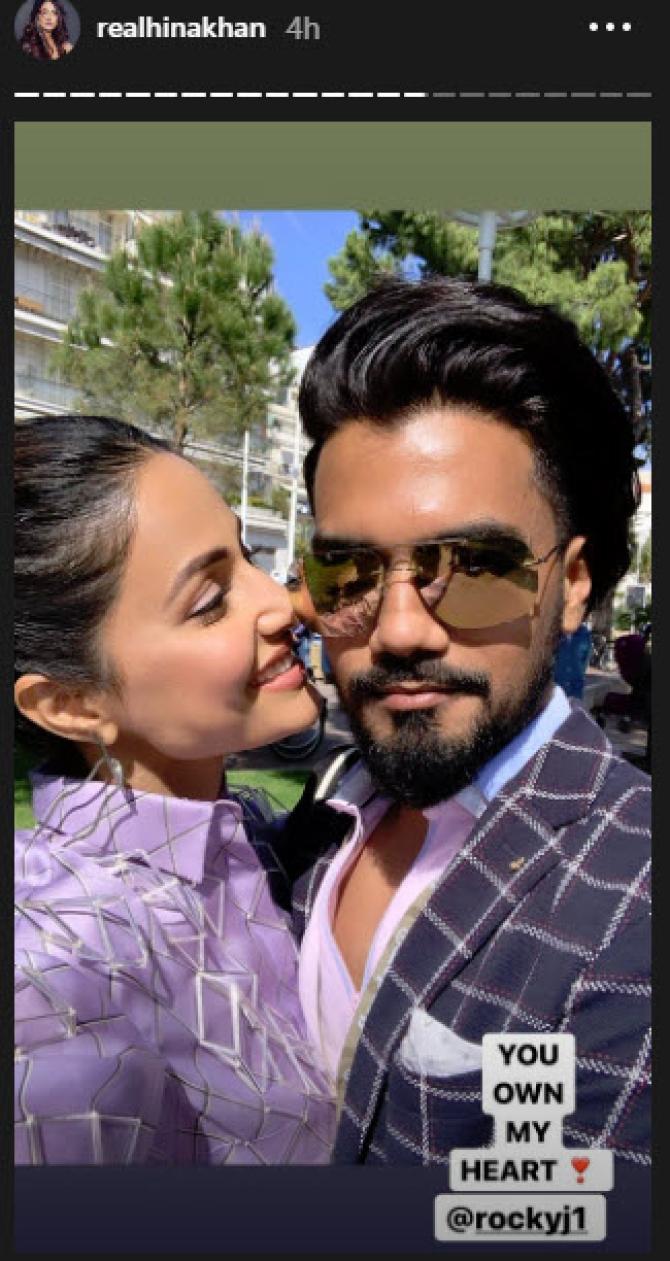 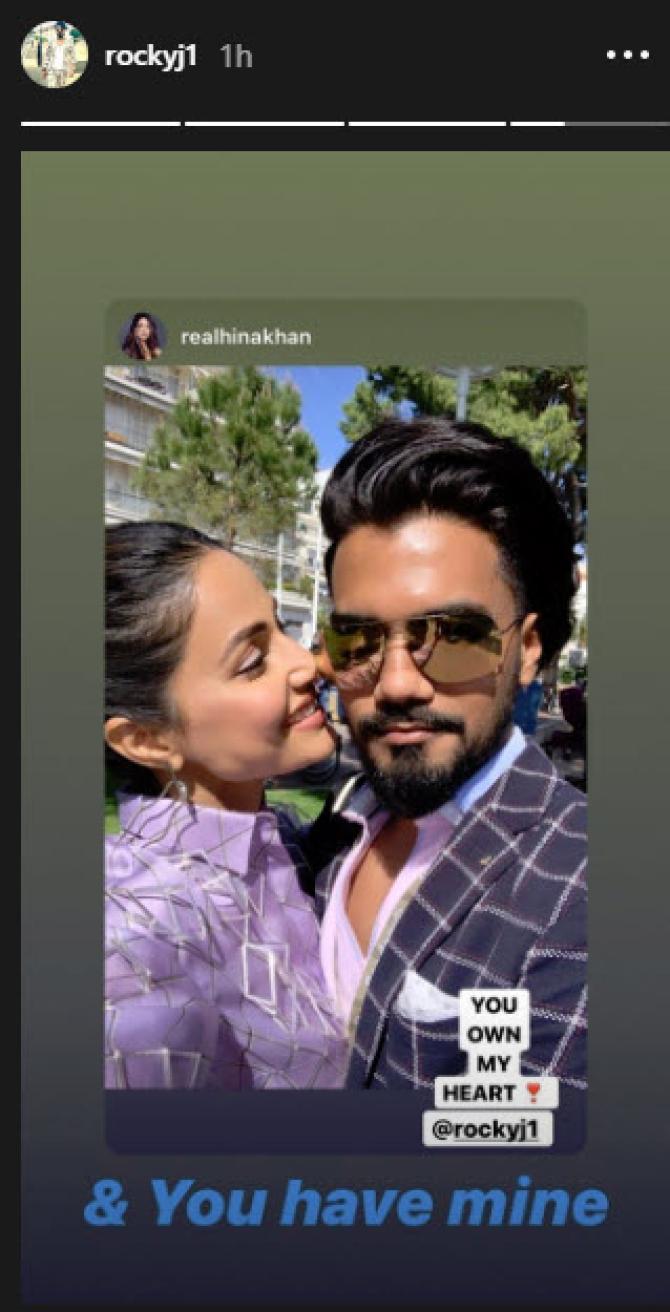 Hina Khan created a stir in the media and on social media with her amazing Cannes Film Festival 2019 debut. Of late, the actress once again made Indians and all her fans proud when she had unfurled the national flag of India at the India Day Parade in New York. Hina herself had shared the pictures on her Instagram handle and had written, “Representing your country is always a pleasure and if you get to do it in one of the most powerful countries of the world. Well, there cannot be a privilege better than that! Holding the tricolour for my beloved country. I endorse the idea that India is in the U.S.A and the idea it represents, humbly appreciate the warmth and inclusiveness of the people and this great atmosphere. Jai Hind! Hindostan Zindabad! Always, humeshaa.” (Also Read: Sara Ali Khan Reveals What Comes To Her Mind First When She Thinks Of 'Love', It Isn't Kartik Aaryan)

Talking about her professional life, Hina is shining like a rising star in her career. Though Hina is not currently seen on television but she has been busy shooting for her film projects. For the uninitiated ones, she has a Vikram Bhatt film in her kitty for the shooting of which she has been juggling here and there from the past couple of days. (Do Check: Boney Kapoor Is 'Disgusted' By Priya Varrier's 'Sridevi Bungalow' After Makers Ignore Legal Notice)

What do you guys have to say about Hina Khan’s short and sweet note for Rocky Jaiswal? Do keep us posted! 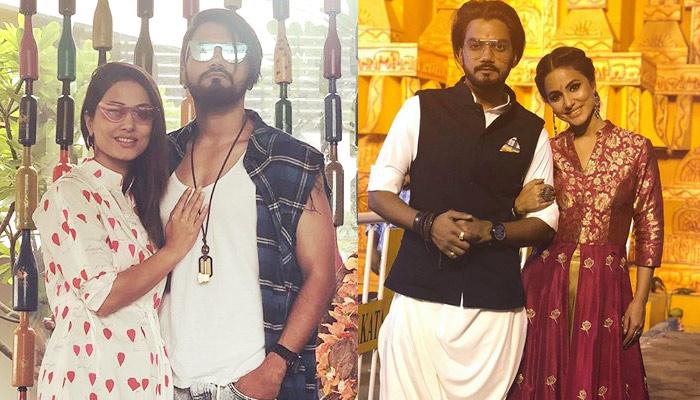