One of the cutest couples from the television fraternity, Rubina Dilaik and Abhinav Shukla, walked down the aisle and became 'mister and missus' on June 21, 2018. It was a sweet and simple wedding that took place at the famous Woodville Palace, Shimla. Rubina and Abhinav’s close friends namely, Husein Kuwajerwala with wife Tina, Sharad Kelkar and his wife Keerti Gaekwad Kelkar, Srishty Rode, Rahuol Lohani, Karan V Grover, Poppy Jabbal, among others were present at the wedding functions. (Do Check: After Meeting Nick Jonas, Priyanka Chopra's Mom Madhu Reacts To Her Daughter's Relationship With Him) 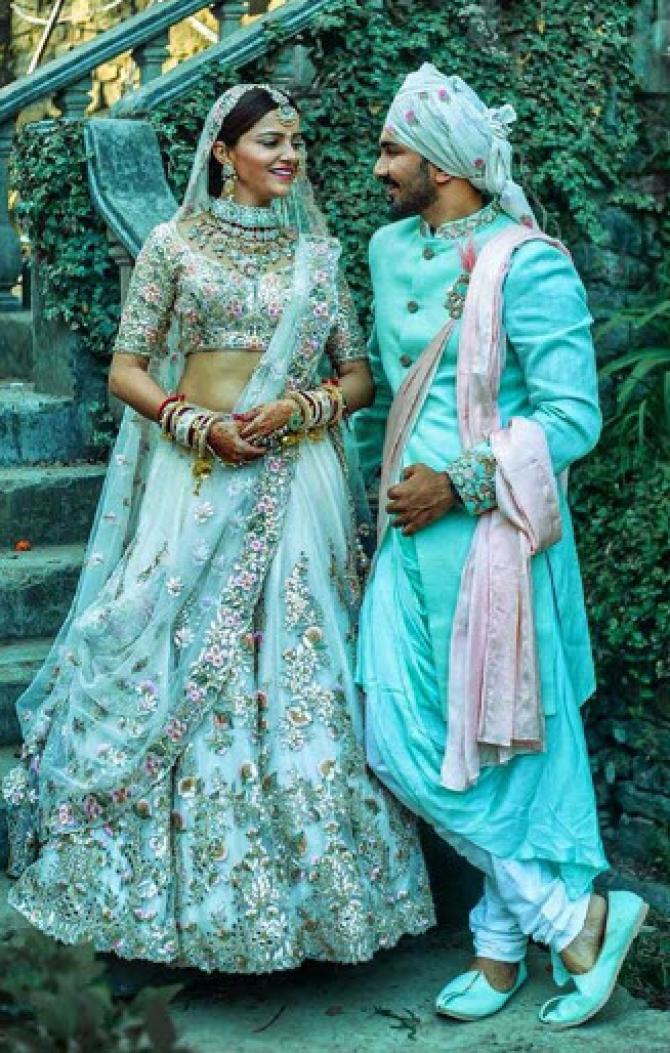 With Just A Few Days Left For The Wedding, Bride-To-Be Rubina Dilaik Shares Her Feelings

All Rubina and Abhinav’s fans have been eagerly waiting to get a glimpse of each and every moment of their D-day. They want to know when they are going on the honeymoon or where are they planning to go. Nonetheless, we don’t have any news about that as of now, but yes one thing is for sure that the couple is romantic enough to make each other special. Well, there is a video that has gone viral online, where we can see the nayi dulhan, Rubina Dilaik singling Dil Diyaan Gallan for hubby Abhinav Shukla. (Don't Miss: Rubina Dilaik And Abhinav Shukla's Wedding Teaser Is Out Already And It's Ethereal [VIDEO INSIDE])

Here are the videos, check it out:

Aww! Look at the way Rubina cuddled Abhinav’s chin. Aren’t these two couple goals? We can’t stop swooning over them and we are sure same would be the case with you all. Earlier, before her wedding, talking to a media portal, Rubina had shared, “I am feeling neither nervousness nor excitement, as the preparations for the wedding and my ongoing TV show shoot schedules have left me numb (laughs). Coordinating things is very difficult. I have hardly slept for four to five hours a day in the last one-and-a-half months. Abhinav and I have decided to exchange seven vows after the traditional wedding. I have written mine and I hope he has too”. (You May Also Like: Ram Kapoor Has The Most Special Way To Celebrate Wifey Gautami Kapoor's 44th Birthday) And also, for the ones who don’t know, Rubina’s wedding gift for Abhinav is a song, which she wrote herself and it took her four months to prepare. This is the sweetest thing any wife could have done for her beau. Talking about the same, Rubina was quoted as saying, “It took me four months to create the song, Teriya Mohabbataein, which is a Hindi and Punjabi mix. It’s my gift to Abhinav, as I wanted to dedicate him something in his mother tongue. Everybody expected me to dance, but I wanted to do something unexpected. I made an audio-visual representation of our relationship, sang the song, recorded it and played it. It was like a musical skit, which was enacted by my friends. That was the highlight of the evening”. Shuklas seemed to be very happy and elated with the hospitality and warmth given to them by Dilaiks. In fact, dulhe raja, Abhinav said about the same, “The Dilaiks impressed us with their warmth and hospitality. The song that Rubina dedicated to me is the best gift I have ever received. Rubina’s mom gave me an outdoor watch, which I was planning to buy since a long time. My mother gave Rubina some traditional jewellery, which she has inherited”. (Check Out: Mira Rajput Can't Sleep Due To Baby Kicks, 2 AM Pregnancy Post Sum Up The Feelings Of Every Mom-To-Be) Rubina Dilaik and Abhinav Shukla make a stunning couple together. We wish them all the happiness in this world and a blissful married life.