Since childhood, we have all been major suckers for romance. And if it involves our most loved telly divas, the romance becomes eternal. From their love story, proposal, wedding ring, wedding trousseau to their first look as a bride with chooda, mangalsutra and sindoor, everything makes our belief stronger in 'happily ever afters'. So, let's take a look at some of the most popular telly hotties and how they embraced their post-wedding look with a dash of sindoor.

Recommended Read: 'Sindoor' Looks Of 10 Beautiful Bollywood Actresses Who Rocked It Like No One Else

The actress who looked every bit of a royal on her wedding day, Drashti Dhami, broke a million hearts with the news of her marriage. Drashti tied the knot with her long-time beau, Neeraj Khemka, on February 21, 2015. The who’s who of the industry attended Drashti and Neeraj’s wedding reception and marriage ceremony with great excitement. Even though we don’t get to see the Madhubala actress sporting sindoor and traditional attire, for her reception she totally embraced her new bride look gracefully. Isn't she nailing her sindoor look? 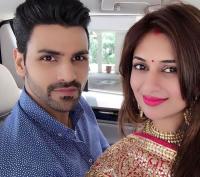 Another actress whose marriage news made all of us jump up from our seats was Divyanka Tripathi. One of the finest actresses on the Indian television screen today, Divyanka is a perfect combination of jaw-dropping beauty and acting excellence.

After a bitter break-up with actor Ssharad Malhotra, Divyanka tied the knot with Vivek Dahiya in a grand ceremony. She not only rocked her sindoor look with a heavily embroidered bridal saree the next day, but also wore it while sporting her magenta gown at her wedding reception. Doesn’t she look breathtaking?

One of the most enviable jodis of the small screen, Kratika Sengar and Nikitin Dheer, (son of veteran actor Pankaj Dheer), have always given us major relationship goals. The duo got married in a lavish wedding ceremony on September 3, 2014, in Mumbai. Even though it was an arranged marriage for the couple, they looked so much in love. And ever since their love is only growing fonder.

Many Bollywood biggies and ministers like - Hema Malini also graced the occasion of their wedding. Kratika looked absolutely smashing in her wedding attire, especially in that royal matha patti. Don’t forget to check out her sindoor look from her reception party.

You May Also Like: 7 Famous TV Celebrities Who Slammed Trolls For Insulting Their Partners On Social Media

The only woman who has dominated the industry with her superb comic timing and hilarious spontaneity, Bharti Singh, had a wedding which every girl dreams of. Bharti had first met Harsh during a comedy show where he was a scriptwriter and she was a comedian. Even though they could not stay connected but their friendship which had begun then, continued. Many years later the duo reconnected, and the rest is just history. Bharti invited all her friends from the industry and their wedding certainly was a fun-do gala affair. Bharti is among those very few actresses who loves sporting sindoor wherever she goes. 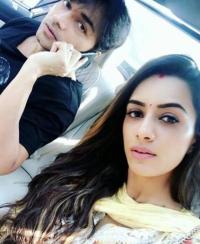 Be it acting, looking beautiful or rocking the perfect sasural look; Smriti Khanna knows how to ace it all. The Meri Aashiqui Tumse Hi fame, Smriti Khanna, walked down the aisle on November 23, 2017, with Gautam Gupta. From her wedding attire, the cool bride looks to the funky jewellery; everything made headlines for quite some time. Post the wedding, the newlywed bride had shared an adorable picture of herself with hubby dearest while taking a long drive. Her traditional look with that bindi and sindoor totally stole our hearts away. Doesn’t she look gorgeous? 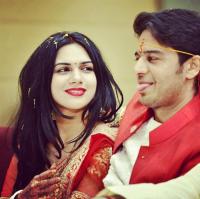 The love story of Swaragini actress, Akanksha Chamola and Yeh Pyaar Na Hoga Kum actor, Gaurav Khanna has been nothing less than extraordinary. While the duo had never publicly accepted or even given a hint of their relationship, the news of their wedding came as a pleasant surprise to everyone in the industry. The dashing couple tied the knot on November 24, 2016. 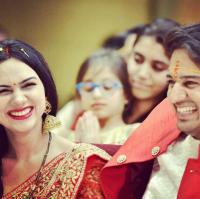 And once they got married, there was no looking back for these two stars who have been painting the town red ever since. The actress was spotted in a beautiful red saree with very light make-up and sindoor post-wedding during one of the rituals. Isn’t she giving us that typical new bahurani look? We simply can’t stop going awwww!

One of the most talked about and sought-after couples of the industry, Vinny Arora and Dheeraj Dhoopar had a traditional Punjabi wedding on November 16, 2016. And it would not be wrong to say that their wedding was all about lots of naachna, gaana and khaana. The duo not only kept their wedding attires fashionable and impressive, but their chemistry too became the talk of the town. Post-wedding, Vinny shared many pictures of her ‘new bride’ look and we have to say, we absolutely loved her in all her avatars. Ye Hai Mohabbatein fame Mihika Verma tied the knot with an NRI businessman, in a secret ceremony on April 27, 2016. Her fans and followers got to know of her marriage through her social media account. The actress shared her wedding pictures on social media much later. However, she was quick enough to change her relationship status to married on Facebook. Even though we did not see the actress sporting sindoor or chooda at the wedding or at the reception, we did catch a glimpse of her marital look when she shared a picture on social media. The sindoor look totally suits her. Don’t you think?

Television’s most adorable couple – Ravi Dubey and Sargun Mehta’s wedding was nothing less than a fairy-tale wedding. The dapper Ravi and the beautiful Sargun have always made for a perfect couple and on their wedding day too, they looked like a prince ready to take his princess with him. The couple tied the knot in a grand ceremony on December 7, 2013. Sargun sported a hassle-free and not too decked up chooda with a little bit of sindoor. Well, we have to say, even this little bit of sindoor is adding more to the glow on her face. Won’t you agree?

Must See: 17 Popular Bollywood Actresses Who Found Love Outside The Industry And Married Rich Businessmen 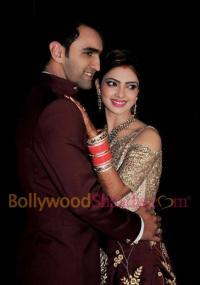 Another grand wedding was that of Television actress and Chandranandani fame – Pooja Banerjee. The bubbly Pooja tied the knot with beau and national level swimmer Sandeep Sejwal on February 28, 2017. The couple opted for a typical and traditional Bong wedding and it seemed, Pooja totally relished in her wedding fervour.

From dressing up as a Bong bride to dancing to Bengali songs on her wedding, Pooja looked just like a quintessential girl-next-door. For her reception, Pooja went a bit modern and opted for a beautiful gown. We couldn’t miss her chooda, the mangalsutra, that sindoor and that beautiful smile!

Beintehaa fame Dimple Jhangiani broke a million hearts with the news of her wedding. And her lavish wedding continued grabbing headlines for many days. Dimple tied the knot with a diamond merchant, Sunny Asrani on December 9, 2016. Dimple sported beautiful chooda set and sindoor at her reception and even when she shared a pic with her husband a few days later. Isn’t she giving us typical new bahurani vibes?

Be it western wear, Indian wear or Indo-western wear, our divas know how to slay it in style. And when it comes to the typical 'new bride/bahurani' look, they most certainly know how to nail it too. Well, we absolutely loved these divas in their new wifey avatar. Let us know whose post-wedding sindoor look did you like the most.