Akash Ambani and Shloka Mehta have completed one year of marital bliss. On March 9, 2020, Tina Ambani shared a beautiful wish for the adorable couple.

Marriages are made in heaven but finding the one destined for us is the most important task. Having a partner, who not only understands our unsaid emotions but also stands like a pillar of strength for us is the best blessing. Shloka Mehta was bestowed with the blessing of marrying her childhood friend, Akash Ambani. Akash and Shloka have become each other’s forever on March 9, 2019, in a dreamy wedding. Since their wedding, the couple has been giving major marriage goals to the millennials. (Also Read: Tina Ambani Shares A Beautiful Anniversary Wish For 'Jeth-Jethani', Mukesh Ambani And Nita Ambani)

Shloka Mehta is the daughter of diamantaire, Russell Mehta and Mona Mehta. She is on the board of directors’ panel for Rosy Blue Diamonds and the Co-Founder, Director at ConnectFor. The love story of Akash and Shloka is not less than a fairy tale! Akash and Shola were childhood friends and it was Akash, who had popped the question to Shloka. And in 2018, the duo had gotten engaged at an exotic location in Goa followed by a grand bash in Mumbai that was attended by the who’s who of business and glamour world. The couple had completed one year of marital bliss and is madly in love with each other.

On March 9, 2020, Akash and Shloka celebrated their first wedding anniversary and it was Akash’s chachi, Tina Ambani, who wished the couple with a beautiful wish. Tina ji took to her Instagram handle and shared a lovely picture of Akash and Shloka with an adorable caption, which can be read as “To a beautiful couple who are always in sync, perfectly matched, and brimming with love. Happy anniversary Akash and Shloka stay blessed always” followed by a heart emoticon.

Coming back to Shloka Mehta and Akash Ambani’s wedding, an official statement pertaining to the same could be read as “The Akash Ambani wedding started with Akash and his family paying their respects to his Dadaji and Nanaji. All the guests collected at the pre-wedding concourse for the Saafa tying ceremony even as Vishal and Shekhar engaged in some foot-tapping singing to set the tempo. Seen mingling and enjoying tying the saafa, the festive Indian turban, were former British Premier Tony Blair, former U N Secy General Ban Ki-Moon global CEOs, cricket legend Sachin Tendulkar, other cricketers and Bollywood stars.” (Also Read: Kareena Kapoor Khan Posts A Playful Picture Of Her Mother, Babita Kapoor With Son, Taimur Ali Khan)

After the grand wedding, a few pictures from Shloka Mehta’s bridal photoshoot had emerged which were enough to blow off our minds! Looking super-happy as a bride by donning herself in an all-red avatar, Shloka’s pictures had surely given us major #BrideGoals. With subtle makeup and exquisite jewellery, Shloka had looked ethereal. The Ambani badi bahu had opted for the bridal colour of red and golden and had teamed up her wedding ensemble with a heavy kundan necklace, maatha patti, nath and traditional earrings.

On March 11, 2019, the Ambanis and Mehtas had hosted a ‘Mangal Ashirwaad’ for the newly-weds, Akash Ambani and Shloka Mehta. From Kapil Sharma-Ginni Chatrath, Sonakshi Sinha to Tamannaah Bhatia, the B-town celebs had put their best fashion foot forward for the wedding reception. While Akash had looked dapper in a red bandhgala kurta, his wife Shloka had looked breathtakingly gorgeous in a pink lehenga with silver embroidery.

Akash Ambani and Shloka Mehta's engagement saw an emotional moment when Akash’s mother, Nita Ambani couldn’t control her happy tears. Nita ji had bestowed a lovely gift to the newly-engaged in the form of a poem that could be read as, "They went to Kindergarten to learn ABC, Not knowing — que sera sera — What their future would be…Gummy bears and jujubes, Sparkle pops and jelly beans… Sweetened their lives, From childhood through teens! Till glasses of milk made way for cups of tea… And the Sky fell in love with sweet Chants of glee! From ponytails and Barbies… From pranks and football… The years just blended… And, today they stand tall – With their eyes full of love With one single plea… Their hearts beat in rhythm Singing, “Will you marry me?” Today we bless them, and today we pray: All through their lives, on each golden day, May they always be there holding hands side by side May Gods shower their blessings on this groom and his bride!" (Also Read: Kalki Koechlin's Beau, Guy Hershberg Keeps An Eye On The Sleeping Mama Bear And Baby Bear) 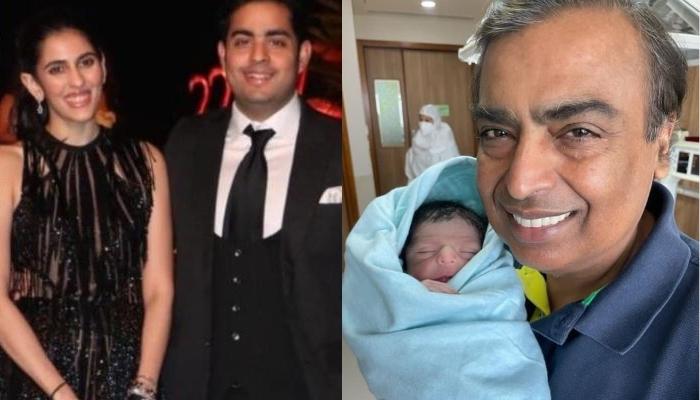 2020 has proved to be a wonderful year for a lot of couples as some were given the ‘good news’ of soon becoming parents while some embraced parenthood with the arrival of a little bundle of joy in their lives. When a celeb couple embraces parenthood, their fans wait with