Throwback Interview Of Sanjay Dutt About Ex-Girlfriend Tina Munim: I Am Very Possessive About Her

Throwback Interview Of Sanjay Dutt About Ex-Girlfriend Tina Munim: I Am Very Possessive About Her

Rajkumar Hirani directed and Ranbir Kapoor starrer, Sanju has hit the milestones with its terrific direction, acting and storyline. More so, because we get to see the real side of Sanjay Dutt that nobody, but only he himself knows. (Recommended Read: Sanjay Dutt And The Women In His Life, From Tina Munim, Madhuri Dixit To Manyata Dutt)

By the way, did you manage to grab the tickets of the movie yet? If yes, then you must have fallen in love with the casting and acting of all the actors, no matter how small a role one has in the film. One character was also of Tina Munim, who was in a serious committed relationship with Sanjay Dutt during his debut film, Rocky (1981). The duo had shared screen space in the film and became the talk of the town overnight. 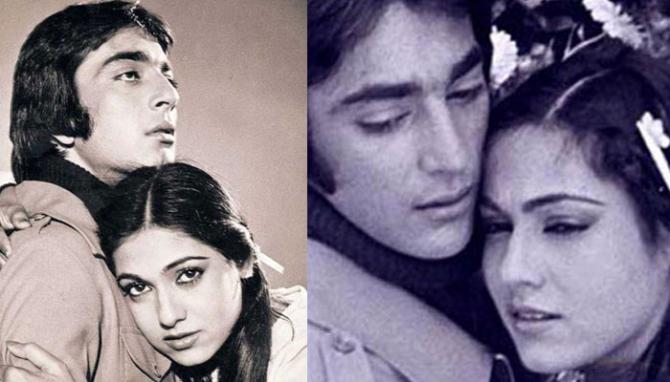 For the uninitiated, Sanjay Dutt was hooked on to drugs in the beginning of his acting career. Rumours also had it that Sanjay had created a rift between his father, the late Sunil Dutt and his sisters because of his addiction. In a throwback interview with Stardust, Sanjay was also asked if his then girlfriend, Tina, also caused trouble in aggravating the rift or further expanding the gap between him and his family.

Speaking of the same, Sanjay had retorted, “Tina has never ever tried to take me away from my family. She has always been the one to guide me and force me to go back home to my Dad and sisters even after a fight. Frankly, every family has its problems. And since ours is a very close-knit family, we do have our occasional tiffs and arguments – nothing serious though. And all of us take turns to sulk. After my mother’s death, we all were quite shattered and each one of us we trying to get out of it in our own way. All of us had become ultra sensitive and very vulnerable. Actually, there was no major misunderstanding between us. It’s just that a lot of bullshit was being spread about me fighting with my father and him breaking my jaw bone, etc. To date, I have yet to have to guts to fight with him!" (Also Read: On Release Of Sanjay Dutt's Biopic 'Sanju', Wife Maanyata Shared A Picture With An Emotional Message) He was also asked if Tina dominates over him and takes decisions pertaining to his professional or personal life. Sanjay had then shared, “I am an emotionally weak man. I have always needed a strong influence over me. My mother was that influence. After her death, Tina has taken her place. She dominates my life, yes, but I have not allowed her to have any say in my career. Tina has never tried to stop me from working with any of her rivals. I have only one film with Poonam because I have been offered only one film with her. And where Ranjeeta is concerned, I would love to work with her too, but no one has wanted to pair us together so far."

In those times, rumours also had it that Sanjay Dutt was very happy about Tina Munim’s film career going downhill. To this, Sanjay had stated, “Frankly, I have never interfered in my girl friend’s career, except in the matter of her clothes. I am very possessive about her. She is mine and I don’t like her to expose herself on screen. That’s exactly where my interest in her career ends. If I am indifferent to her flops and hits, it doesn’t mean that I am selfish enough to be delighted when her career is not doing well, only because that would make her sit at home. If I wanted her to stop working, I can ask her to do so. I don’t want her to quit for another three years, for that’s when I intend to get married. I want her to enjoy life and do whatever she wants to do till then." Quite like Sanjay, Tina Munim was also paired with many men of her times. When asked if Sanjay had turned a blind-eye to the rumours, he had shared, “My girl has been linked with so many men that it is physically impossible for any woman to cope with so many of them in such a short time. I have not defended her blindly. Each time I’ve heard or read about her, I’ve gone insane with anger – but most of the time, she has managed to convince me that what I’ve heard is not true. I love her too much not to believe her. One has to trust somebody sometime, and I trust her. I always tell her, ‘Today, I am quietly taking everything I hear about you because I don’t want you to start screaming and getting suspicious the moment you listen to stories about me.’ I obviously expect her to be as understanding with me as I am with her today." The duo had reportedly parted ways due to Sanjay’s excessive drinking habits and drug addiction.

Talking about the ex-couple’s present scenario, Sanjay is happily married to Maanyata Dutt, whom he adores and loves deeply. He is blessed with three beautiful children- two children from his marriage to Maanyata and a beautiful teenage daughter from his first marriage to Richa Sharma. Tina, on the other hand, is happily married to Anil Ambani, Chairman of Reliance Group. She is the present Chairperson of Mumbai-based Kokilaben Dhirubhai Ambani Hospital, Harmony for Silvers Foundation and Harmony Art Foundation. Was it interesting to read about how Sanjay Dutt was, as a boyfriend? Let us know in the comments section below.