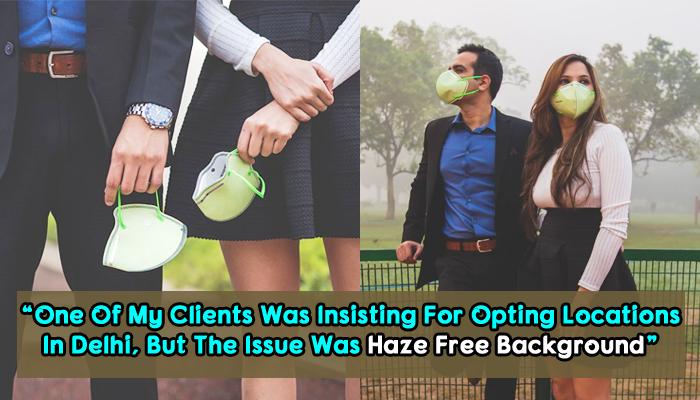 Delhiites are often quoted as saying that Delhi’s winter is to die for, and you would fall in love with the city. Does that ring true in November 2017? Last year, on October 31, 2016, Delhi woke up to find herself engulfed and choked in smoke on the morning following Diwali. Visibility dropped down to a meagre 2 metres! 2 metres! That’s like, you wouldn’t recognise your better-half if she is at a distance from you, unless you dream of her silhouettes.

Recommended Read: Shveta Salve Got Her Maternity Photo Shoot Done And Boy She Nailed It Like No One Else Could!

Just last week, Delhi became privy to something similarly suffocating. Even with the headlights on, cars and trucks bumped into each other like toys, and hundreds flocked to hospitals on account of respiratory problems.

Now, imagine the Luteyn’s Delhi, which is known for its beauty, witnessing a wedding. A wedding in smog-choked Delhi? Does that sound any paradisiacal? But, what if there is one? A wedding, which has already witnessed so many events, preparations, emotions and relations, cannot obviously be postponed just because there is pollution outside the doors (visibly, and inside as well), right? Well, not necessarily.

There used to be a time in which wedding photographers used to crave for morning shoots in Delhi as part of any pre-wedding photoshoot. Beautiful and serene mornings of Delhi roads, evening lights shining in the Georgian pillars of Connaught Place, tranquillity in Garden of Five Senses, finger-tip Qutub Minar shots, and regal snaps at India Gate, were the first choices of any wedding photographer. But, all seems to be lost now. Thanks to human’s wanton desire of progress.

Don't Miss: This Couple Chose Love For Food Over Typical Romance As Their Pre-Wedding Shoot Theme

“While the entire Delhi and the country were talking about 'SMOG', while chit chatting with my better half regarding a photo shoot where one of my clients was insisting for opting locations in Delhi, but the issue was health and haze free background. Thereafter the idea of capturing the issue came up and we decided to go about it with a friend couple of ours.”

“The buzz or the alarm regarding pollution is raised only when the situation worsens; otherwise, no one talks about it.”

Well, that seems to be the case in Delhi now. We’ve often heard that an artist’s work is a reflection of the society in which he lives. That’s what happened when Ashish decided to address the problem candidly through a pre-wedding shoot of a couple friend.

Masked identities seem fun if it’s a carnival or a masquerade. But it’s alarming and almost heart-wrenching to see a couple, a man and a woman who would soon be pronounced husband and wife, wearing masks for their pre-wedding photoshoot.

You May Like: Bharti Visits Sidhivinayak Temple With Hubby-To-Be Haarsh, They Offer 1st Invite To The God

Talking about the reality shown in the photos without any exaggeration, Ashish adds:

“Usually we do lots of post-processing in our photos, but here I tried to keep them as natural as they are.”

Well, here we’re now! Breathing poison and dying slowly every day! Ashish raises a very important and alarming issue through this idea, and asks on his website- “are we ready to lose our identities and to settle for a colourful mask?”

We, as readers and writers, or more so as artists, must address these issues, and we’re proud of artists like Ashish who took us through this poisonous alley in a way that has never been done before. What do you think of this story? Do let us know in the comments section below.

Next Read: Bachchans Look Royal And Stylish At A Family Wedding, Abhi-Aish Give Us Couple Goals