Meet our bride of the week, whose love for custom-made outfit gave her the courage to design a 3D-floral lehenga for her own mehendi function. Check out to know her lehenga story!

When we were young, we all loved dressing up our doll as bride and there were times when we also dressed ourselves as a bride. Those were the best days of our life, but then we grew up. And while we stopped dressing up as a bride in a 'make-believe' game, we never stopped dreaming about getting married. Every wedding turned into an inspiration board for us and we jotted down all the trends in our mind for our shaadi!

Over the years, we have seen many brides, who changed the fashion game with their hatke outfits. While some re-wore their mother's thirty-year-old gharara, some styled their wedding lehenga with bridal sports shoes. There were some, who opted for minimalistic ensembles. However, this week's bride took the bridal game to the next level with a 3D-floral lehenga for her mehendi night.

Bride Surprised Her Groom With The 'Lehenga' Of His Choice, Left Him Speechless On The Wedding Day From left to right: Pernia Qureshi had worn her mother's 30 year old gharara for her own nikaah; A bride who ditched the usual heels and had opted for sports shoes.

Meet our bride of the week, Akanksha Gajria, who is a fashion designer by profession, and she had seen a beautiful dream of being dressed up in flowers. So, she had designed a custom-made 3D-floral lehenga for her mehendi ceremony. Her most important day was beautifully captured by Israni Photography. Akanksha had narrated her amazing lehenga story on her IG handle. She had shared that her outfit had taken 2000 job hours to be created. 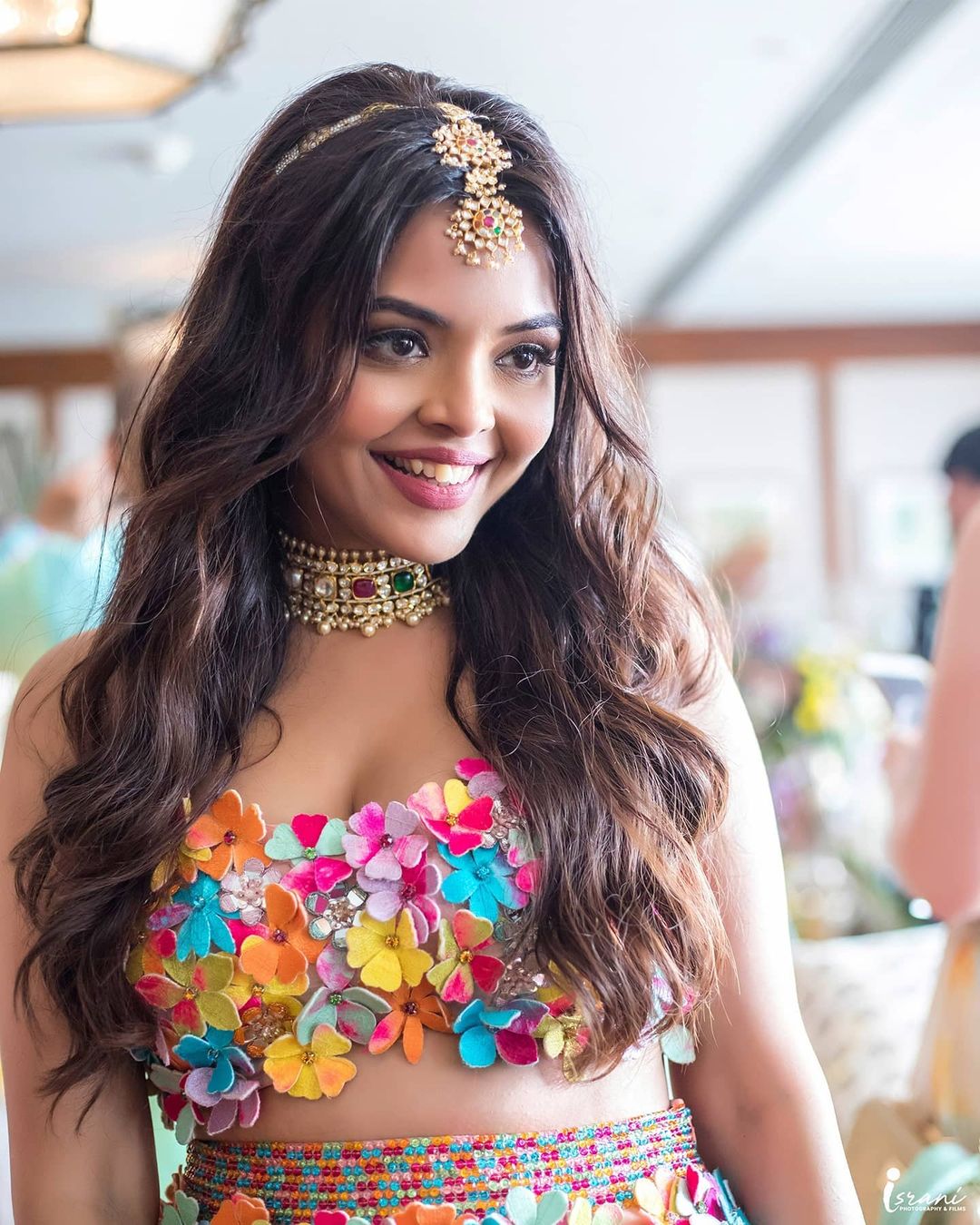 The bride, Akanksha Gajria, from her mehendi ceremony!

The bride had accessorised her look with a custom-made mathapatti and choker neckpiece by Surbhi Jewels. She had finished off her bridal glow with minimal makeup and soft curled tresses. Taking to her IG handle, Akanksha had shared, "With my Mehendi outfit, it needed to be bright, happy & colourful - A classic! The tie dye 3D-floral lehenga took over 2000 job hours to be created. We gathered all our left over tie dye fabrics to create this look from scratch. Each fabric is first laser cut into petals, embroidered into flowers & then hand embroidered on the lehenga. This painstaking process creates a unique look each time the outfit is created, resembling the unique nature of a thumbprint!" 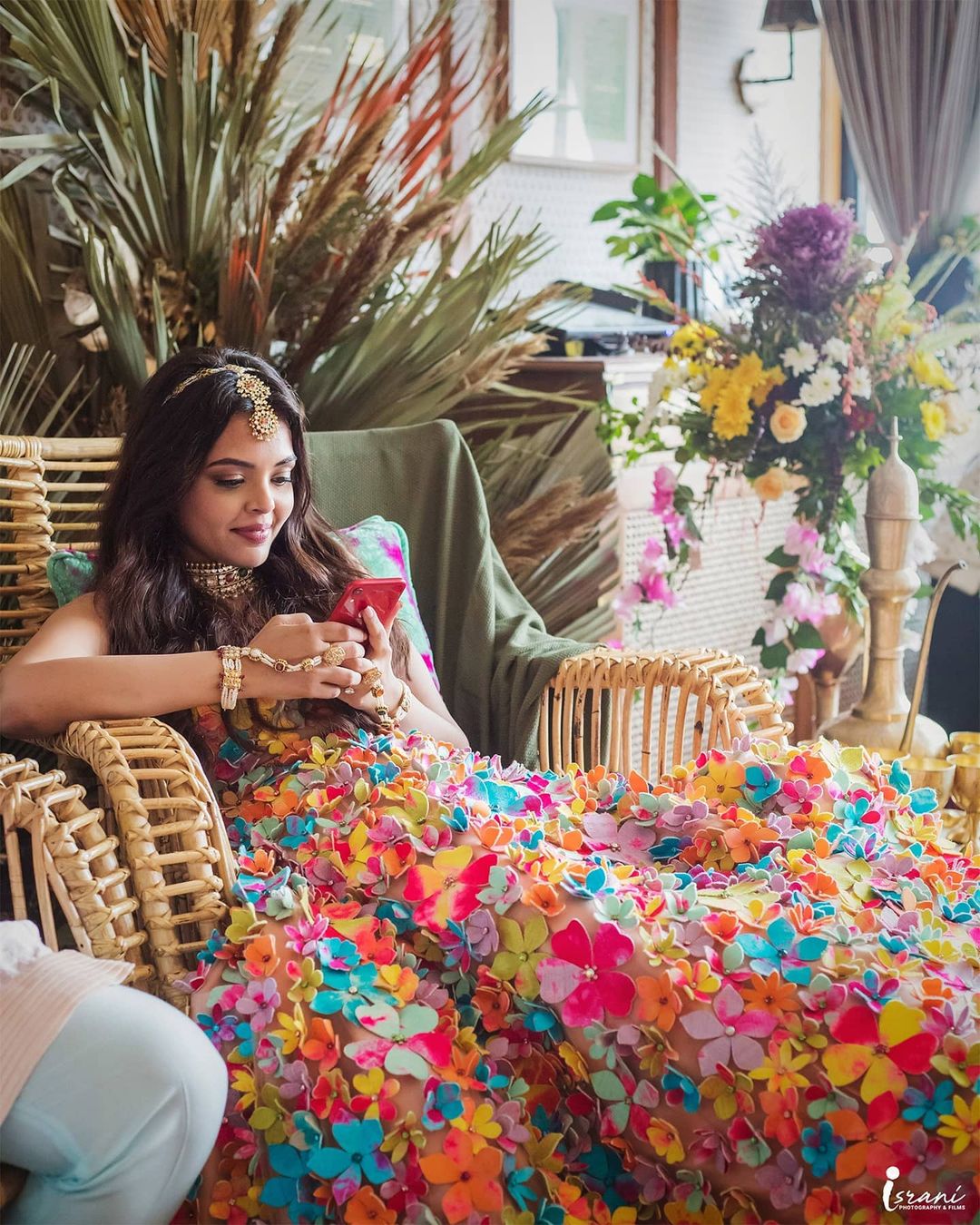 The bride, Akanksha had also created a custom-made ensemble for her 'mister', Avinay. She had made sure he complemented her precious lehenga as well. The fashion designer had narrated the story of creating her hubby's mehendi outfit and had written on her IG post, "I put my heart into creating custom looks for Avinay that not only complemented mine but also made his personality stand out. For the 7 years that we dated, he has always been the one who has pushed me to create different looks for him. For Mehendi, his brief was that he wanted it to be chill & laidback but "I should still look like a groom"!" 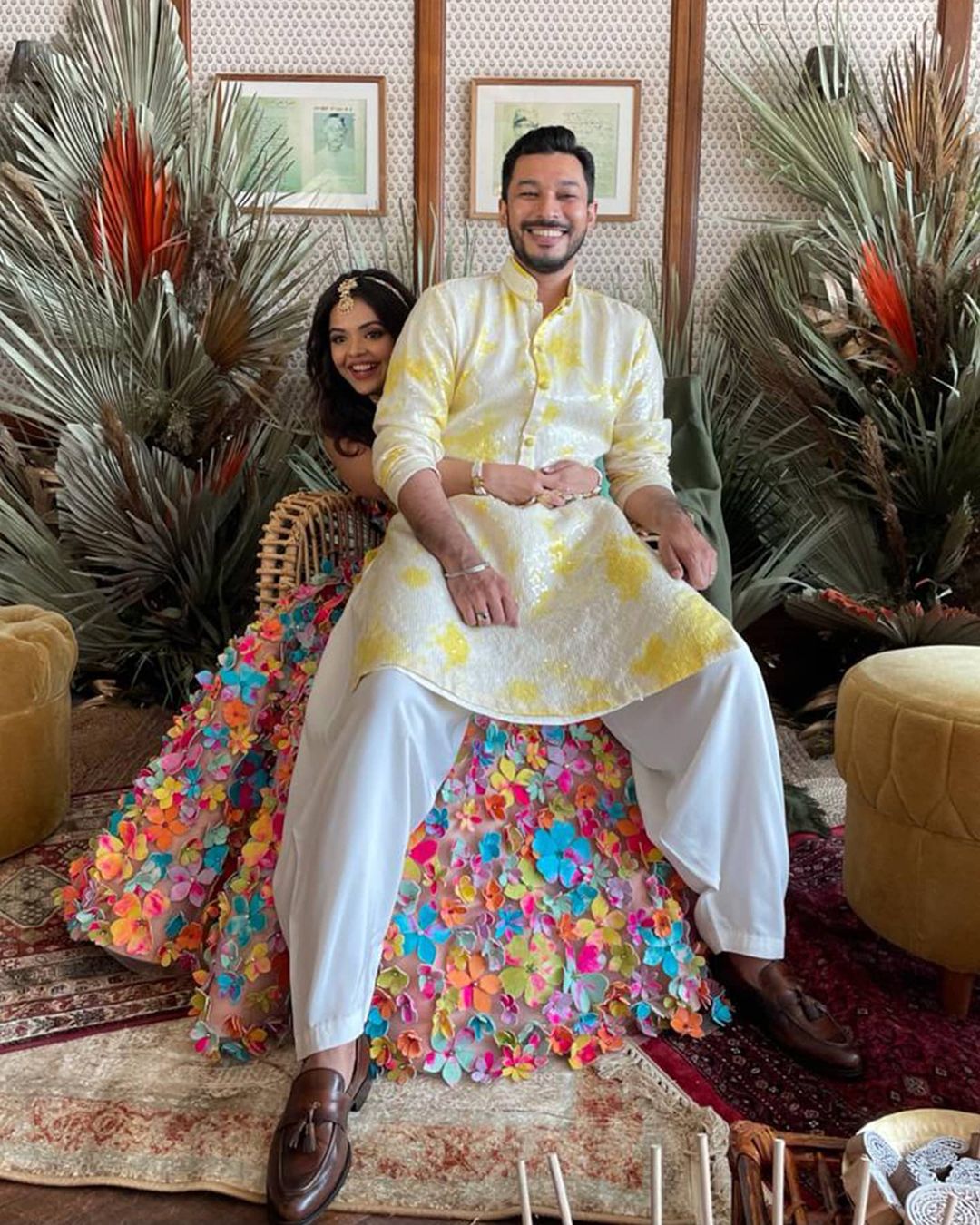 Bride and groom on their mehendi ceremony!

She had further concluded her note by explaining the designer ensemble, "Our function was a brunch event for which I ended up creating our very first sequin kurta in ivory & yellow tie-dye splatter worn with a ghera salwar because our man simply refused to accept anything that was done before!" 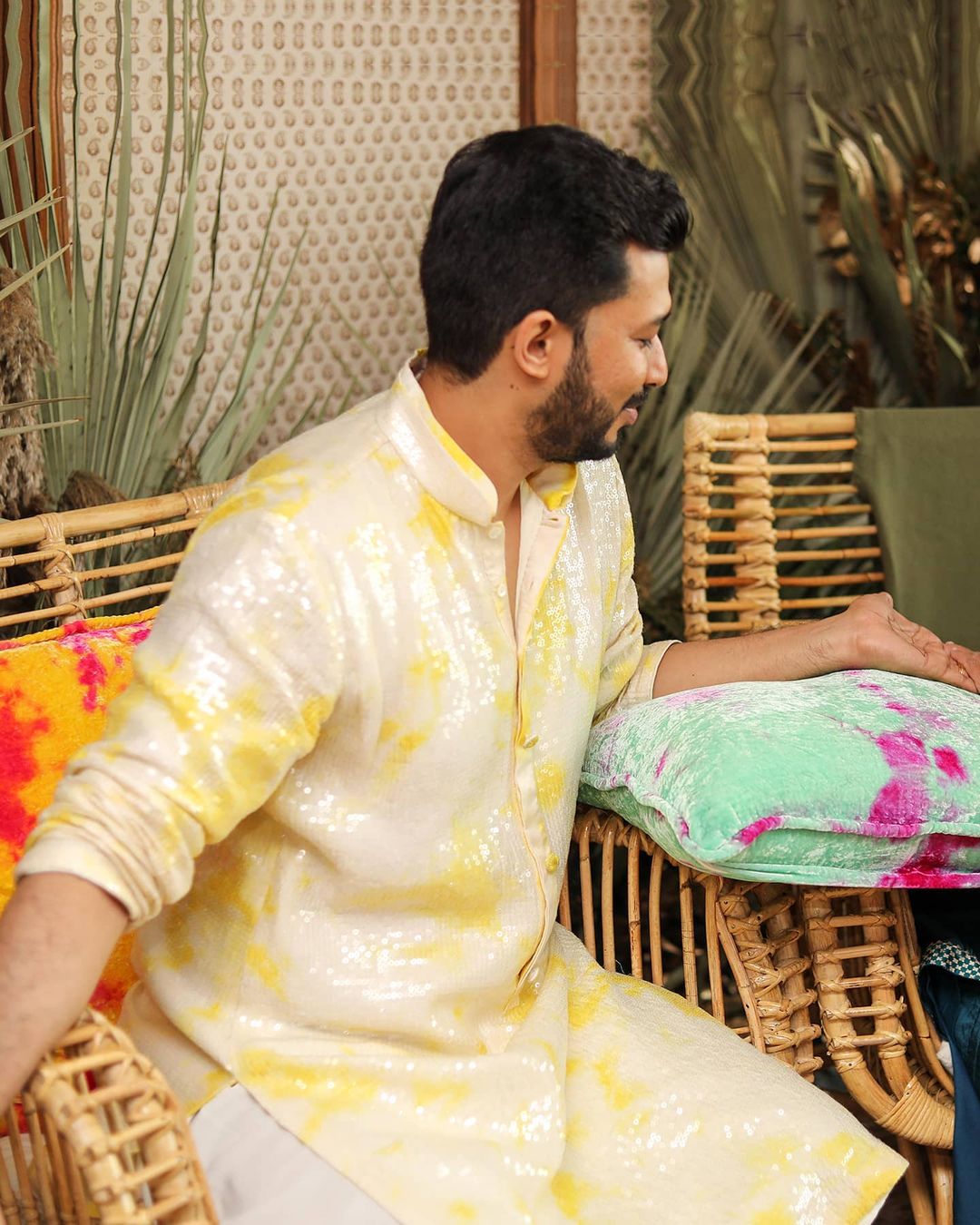 The groom getting mehendi on his hand!

Well, we are totally in love with our bride's custom-made mehendi ensemble! It proves that for a bride, a wedding is not just another event in her life, but the most important one, for which she prepares for all her life!

Don't Miss: This Bride Wore And Rocked A Minimalistic Sabyasachi Lehenga For Her Wedding Reception