Taimur Ali Khan Corrects Paparazzi When They Call Him By His Name And Says 'It Is Tim', Video Inside

Taimur Ali Khan Corrects Paparazzi When They Call Him By His Name And Says 'It Is Tim', Video Inside

Kareena Kapoor Khan and Saif Ali Khan’s soon-to-be two-year-old son, Taimur Ali Khan has been making our dull days better ever since his birth in 2016. From being adorably cuddled in Kareena or Saif’s arms to leaving his mumma’s hands to go towards paparazzi, we have literally seen Tim grow up. His fan-following has surpassed his parents, Kareena and Saif’s stardom and how enthusiastically Tim deals with media makes us feel like a superstar in the making.

Did you notice in the above paragraph, we have mentioned Taimur as Tim, which is his nickname? Well, for us, he might be a muffin, goofball, cutie-patootie, munchkin, cheesecake, or anything we wish to call him. But the little one wants the paparazzi to call him as Tim. Taimur loves his nickname Tim, given to him by his parents, so much so that he corrected the paparazzi who were calling him Taimur. (Also Read: Unseen Picture Of Taimur Ali Khan With Parents Kareena Kapoor Khan And Saif Ali Khan In One Frame) So recently what happened was, paparazzi snapped Taimur at his residence and greeted the chote Nawab as Taimur. But the little one corrected them by saying, 'It is Tim', which was followed by the most adorable ‘bye’ in the world. Hearing Taimur say these words is indeed a treat to ears, and we have been watching this video on loop. Take a look at it here:

Another picture of Taimur went viral recently, wherein he can be seen sporting a grey t-shirt and mustard shorts with a stylish superhero addition, a batman cape! Just like a superhero, Taimur has been brightening up our days and shedding away the blues in our lives. Here's the picture we are talking about: 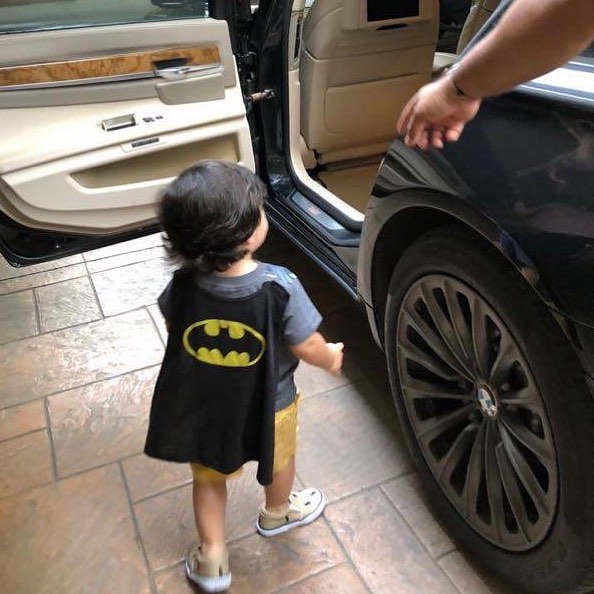 In an earlier interview, Saif talked about inculcating values in Taimur and revealed that his nickname is Tim. He had stated, “You have to sit him down, the minute he can understand it. And it'll start with calling the people at home and not yelling. It'll be manners, it'll be Please, Thank You, Aadaab. It'll be discipline from young age. At least we know these things. These Bombay kids are out of control. He'll be very well behaved. And honestly if he does his namaste right, he'll score points. Have you seen Sara's aadaab when she was younger? This is it. This is what we need, a nice aadaab from Tim. TIM by the way.” (Also Read: Taimur Ali Khan Dealing With Paparazzi At Young Age Is Perfect Glimpse Of A Superstar In The Making) Speaking of Tim being a genetic trove, Saif shared, “He's blue-eyed. He's a genetic treasure trove. He is. He is got a bit of Rabindranath Tagore, he's got a bit of Raj Kapoor, he's got a bit of Mansoor Ali Khan Pataudi, he's got a bit of Bhopal, I don't know, he's beyond me. He's gone. Let's see what happens.” In another interview, he revealed the words Taimur loves to say. Saif was quoted as saying, “He has learnt a few new words. He calls me ‘abba’ and has now started to say ‘baby’ and ‘gum’. Whenever he sees a chewing gum, he would just scream ‘gum’. He likes to watch the moon, so I sit with him in my office and show him the moon.” 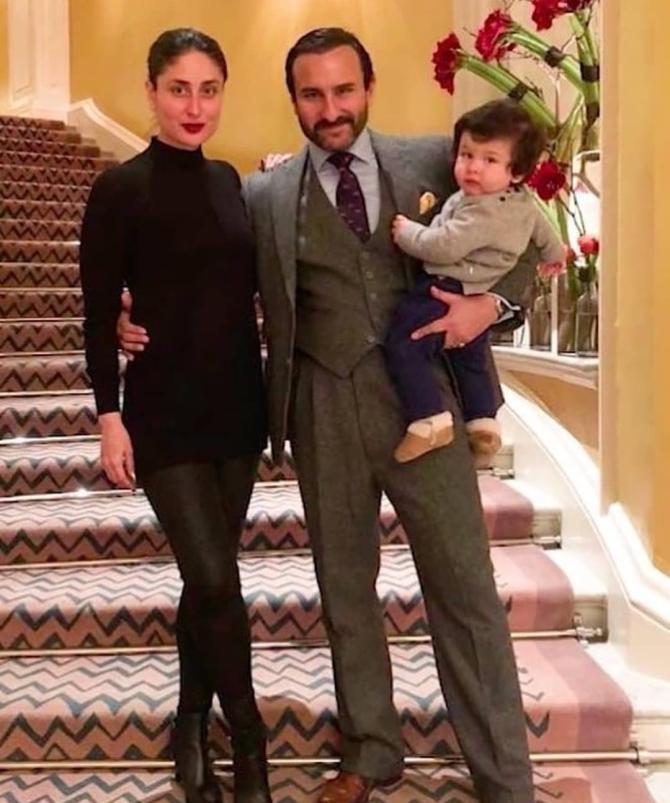 The Bazaar actor further added, "Taimur should be freely able to take his evening outing in the park. It becomes difficult in certain situations, but the photographers are really friendly. They are just doing their jobs and they don’t push him or his nanny, which is really kind. They aren’t aggressive so I’m happy.” 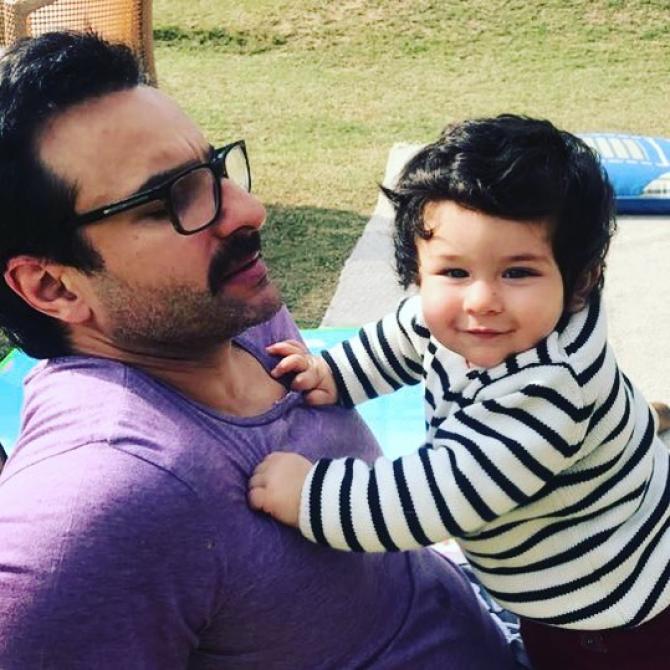 Talking about the attention Taimur is getting from media and paparazzi, Kareena cited in an interview, “We want him to have as normal a life as possible; we can’t take that away from him. It’s his right to have a normal life. We feel awful about the fact that he gets clicked everywhere he goes, but we can’t keep him confined to our house, right? He’s just 17 months old; he shouldn’t be given that kind of focus and attention all the time. Now he reacts to the paparazzi when they call out his name. I know this is reality and I can’t run away from it. In time, he will understand what this is all about, and hopefully, Saif and I will be able to keep it as normal and balanced as possible.” (Also Read: Kareena Kapoor Khan And Saif Ali Khan To Have Second Baby In 2 Years, She Reveals On A Show [VIDEO]) 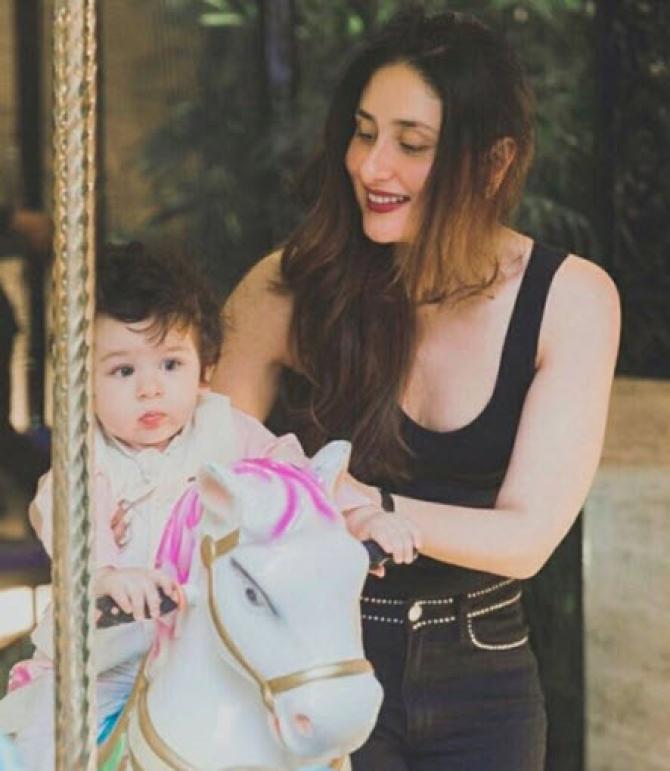 We can never thank this little one enough to make our day better and happier with his overdose of cuteness!