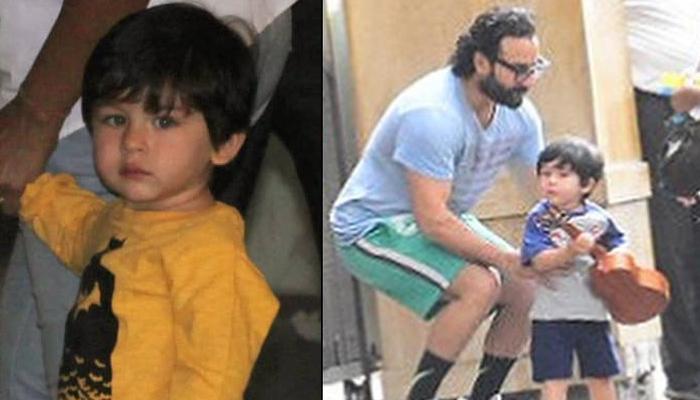 While all the other Khans in B-town are truly passé now, Saif Ali Khan and Kareena Kapoor Khan’s two-year-old kiddo, Taimur Ali Khan is ruling the fraternity and like how! Baby Tim manages to bring a smile on our faces every single day and sweeps the entire nation with his cuteness and charm. Not a day passes when we don’t scroll our social media timelines to get a glimpse of chote Nawab, either in his cowboy avatar riding a horse or having a playdate with cousin sister, Inaaya Naumi Kemmu. And today was no different! (Also Read: Taimur Ali Khan And Inaaya Naumi Kemmu Give Cold Stare To Paparazzi Friends, Pictures Inside)

Taimur Ali Khan was snapped outside his residence, dressed in a cute white and blue t-shirt, blue shorts and red shoes, with daddy, Saif Ali Khan. But what caught our attention is the ukulele that baby Tim was holding! Looks like, apart from the horse-riding, badminton and football lessons, chote Nawab is ticking off things from his list of becoming a 'rockstar'. Here’s the picture:

A few days ago, Taimur Ali Khan was spotted with Saif Ali Khan outside their residence and the little munchkin was sitting comfortably on his father’s shoulders, kissing his football. Looking adorable in a white t-shirt and red shorts, Taimur’s picture sitting on Saif’s shoulders will surely remind you of your childhood days.

Speaking of travelling, Saif recently shared in an interview with Conde Nast Traveler as to how it feels travelling with Taimur. He said, "Despite having the idea of trying different things, we’ve ended up (and my wife is quite annoyed about this) going to the same places and doing the same things every year—London in summer, Gstaad in winter, with some parts of India, like Rajasthan and Pataudi, in between. We would have liked to go to more places in Italy and France—and we will. But you know, there is also something comforting about going to the same places, because the people know you and the hotel feels like home. With Taimur, we also end up travelling with a bit of an entourage. We never travelled light, but after Taimur, we travel even heavier." (Also Read: Actor Karan Grover Shares A Dreamy Selfie With Saumya Tandon And Her Newborn Son, Pic Inside)

Kareena Kapoor Khan, along the similar lines, was quoted as saying, "Well, I’m experiencing motherhood for the first time, so everything with Taimur is a first. Travelling with him is especially new and exciting—even if we’re going to a place I’ve been to before, taking him there makes it so different. I loved the Maldives holiday, loved showing him all these new things and places, and seeing them with him."

Earlier in an interview, Saif shared which values he would want Taimur to inculcate and revealed also the nickname of Taimur. He had said, "You have to sit him down, the minute he can understand it. And it'll start with calling the people at home and not yelling. It'll be manners, it'll be Please, Thank You, Aadaab. It'll be discipline from a young age. At least we know these things. These Bombay kids are out of control. He'll be very well behaved. And honestly, if he does his namaste right, he'll score points. Have you seen Sara's aadaab when she was younger? This is it. This is what we need, a nice aadaab from Tim. Tim by the way."

After the birth of their little prince, when Saif and Kareena announced that they have named him Taimur, it led to a lot of controversies. Saif in an interview had then shared that he might change Taimur’s name because he doesn’t want him to get infamous merely for his name, “You know, actually - I haven't told anyone this - I thought for a second about changing his name. For a couple of weeks. And Kareena was a little against it and she said, 'People respect you for your opinion and you can't'... So I said, yeah, but it's not about people. I don't want him to get unpopular.” (Also Read: Esha Deol Is Pregnant Again, Her One-Year-Old Daughter Radhya Is Soon Going To Become A Big Sister)

Thank you, Taimur Ali Khan for spreading love and happiness with your million-dollar smile, every single day! 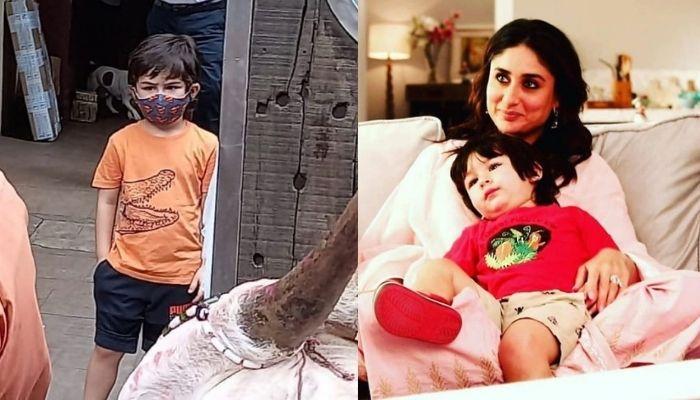