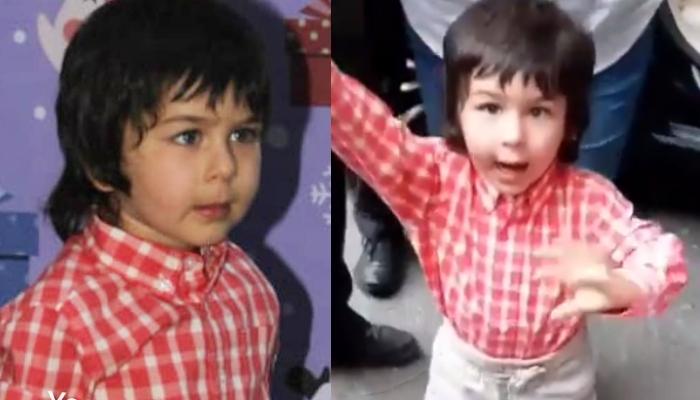 It is a wonderful time of the year when every kid on the block eagerly waits for Santa Claus' 'Ho-ho'! The time has come when a big old man with a jolly laugh comes down our chimney to treat all the kids with a bag full of gifts. Yes, we are talking about Santa Claus, who has silver hair, wears a cute red suit and maintains a big book of all the good and naughty kids. And while everyone is busy singing Christmas songs and spreading the holiday cheer, B-town is not far behind. On the eve of Christmas, Salman Khan's sister, Arpita Khan Sharma hosted a big Christmas bash for all the star kids. (Recommend Read: Anita Hassanandani Jets Off With Her 'Psycho Saiyaan', Rohit Reddy To Ring In Christmas And New Year)

On December 24, 2019, Arpita Khan Sharma organised a cute Christmas bash and it was a star-studded event. The first one to arrive was Tusshar Kapoor with his son, Laksshya Kapoor, Karan Johar with his twins, Yash and Roohi, Neelam Kothari with her daughter, Ahana. But the star of the bash was as usual everyone's favourite Taimur Ali Khan. The boss baby entered the bash in style and we totally adored what he wore. Check out the pictures below:

For the Christma bash, Taimur wore a checkered-red shirt and teamed it with a pair of beige shorts. His look was completed with white Nike kicks. And while we were praising his outfit for the party, we got hold of a cute video, wherein the three-year-old was seen greeting the paparazzi with a 'Hi'. Check out the video below:

On December 20, 2019, Taimur had turned three and his parents had thrown a grand Christmas-themed birthday bash for their little kid. For the party, Taimur had opted for a navy blue tee teamed with a pair of denim and cowboy shoes. On the other hand, his mommy, Kareena had looked gorgeous in a polka-dot dress, while Saif had kept his look casual. (Also Read: Ex-Lovers, Deepika Padukone And Ranbir Kapoor To Come Together For A Movie With Current Partners)

For those who don't know, this year Taimur had placed a cute birthday demand from Kareena. The actress had shared the same in an interview with The Times of India, and had said that they were going to be in Mumbai for Tim's birthday. She and Saif will promote their film and will be spending time with the family. She also shared the little boy's demand of cutting two cakes and not one. In Kareena's own words, "He is a Kapoor (laughs). He is like, ‘I want two cakes. One Santa and one hulk’. I said, ‘Why two?’, he is like ‘Two!’" 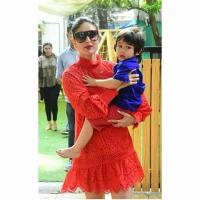 She had further added, "I had support from my family. I had a lot of help. I had support from my sister (Karisma Kapoor) and of course most importantly, Saif. He comes from a family where his mother was working, his sister is working. It was easy for him to understand that I would take Taimur with me if I had to for a shoot. Absolutely 100 marks to Anil Kapoor and Rhea for being such fantastic producers. Taimur was so well looked after. I’ll always consider them as family. I couldn’t have asked for a better film to do after Taimur. And Taimur, of course, settled so beautifully in Delhi while I shot. He’s a happy trooper. Touchwood!" (Don't Miss: Soha Ali Khan, Kunal Kemmu And Inaaya Naumi Kemmu Leave For Their Christmas And New Year Vacation)

Well, we totally love Taimur's way of greeting the shutterbugs! What about you?