Taimur Ali Khan Gets Into A Race On The Sets Of Mommy, Kareena Kapoor Khan's 'Good News' [VIDEO]

Taimur Ali Khan Gets Into A Race On The Sets Of Mommy, Kareena Kapoor Khan's 'Good News' [VIDEO] 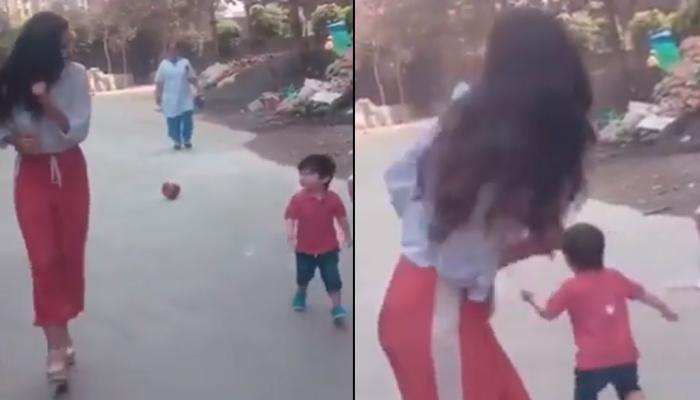 Whenever we get bored during our daily chores, one thing can surely make our blues pass, and it is scrolling through the social media profiles to catch a glimpse of the chote Nawab of Pataudi, Taimur Ali Khan. The nation is obsessed with Saif Ali Khan and Kareena Kapoor Khan’s two-year-old munchkin, Taimur! Multiple celebrities from the tinsel town have, time and again, expressed their desire and baby-crush over him. (Also Read: Kareena Kapoor Reveals What Saif Ali Khan Should Do To Get More Of Her Attention Post Taimur's Birth)

From the first time he ran towards paparazzi leaving his mamma’s hands to the first time he said ‘bye’ to the paparazzi, from riding on a horse or piggybacking on his daddy’s shoulders, from waving to his media friends to hanging out with his star family, every move of Taimur makes our day better. We recently spotted our little squishy playing on the beach and soaking in the sun on the sets of father, Saif Ali Khan’s Netflix's original series, Sacred Games 2.

Now, we got our hands on a video of Taimur Ali Khan enjoying a race with mommy, Kareena Kapoor Khan’s Good News co-star, Kiara Advani. Kiara shared an Insta story as she couldn’t resist playing with baby Tim in between her shots on the sets of the film. Kiara wrote, "The real star on the set! Keeping up with Tim Tim" atop of the video. Check out the video:

In an interview with DNA sometime back, Kareena Kapoor Khan revealed how she manages to strike a perfect balance between her personal and professional life. Bebo had shared, “I love doing nothing and being at home, just with my son, Taimur. But again, I also know that I can’t always do that. So, the idea is to find that balance. Strangely and honestly, I’ve found the perfect balance between my personal and professional life. For instance, if I’m working back-to-back for four-five days, I take the next two-three days off because I want that downtime. I need to have my family and friends around because my life revolves around them. I need to feel like a human being. I can’t treat myself like a robot because this industry and the atmosphere pushes you to become one. People are always on the go — if you’re not at work or a set, you’re on digital platforms like Instagram and Twitter or talking somewhere and giving your comments.”

When further probed that whether it’s marriage, pregnancy or motherhood, she has defied the norms, Kareena went on to add, “I was always clear about what I wanted. People had advised me not to get married because they felt producers film offer nahi karenge. They had told me I shouldn’t work while I was pregnant. But everything is possible — women multitask. You can be a mother and do your job as well. So many people around the world are doing that and we might not know about their stories. But, obviously, because I’m an actress, the spotlight’s on me. This show gives an opportunity to everyone to share their real stories. We have common people addressing their issues. And, of course, there are celebrities because we want to hear them. Longevity is in yourself — if you keep going, change is bound to happen.” (Also Read: Ritika Sajdeh Shares Video Of 'Sleeping Beauty' Samaira Smiling, Rohit Sharma Plays With Little One)

When asked if there’s anything she wants now and is yet to get, Kareena continued, “Maybe a movie with Sanjay Leela Bhansali (laughs). But for that, Taimur has to be at least 10 years old because I can’t leave him before that. That’s the joke between Sanjay and me that we are star-crossed lovers (smiles).”

In an interview to Mid-Day, Kareena Kapoor Khan revealed that even her husband, Saif Ali Khan intends to create the work-life balance and is keen to do only one film each year. Bebo had said, "Movies will go on, but I will do one film at a time. My husband isn't a businessman who comes home at 6 pm. He is an actor too, and between us, we must balance our time out for Taimur. We have decided we'll do one film each — I did Veere Di Wedding, now he is doing Navdeep's [Singh] film. After he finishes his commitments by November, I will start my next. So, I can kick it off in January."

The Jab We Met actress further added, "My family, my son, my husband — they are the most important things for me. I love being a mother as much as I love my work. I want to ace that balancing act and be an example for others. I was told that I won't get films after marriage. I changed that. Even if this turns out to be a mistake, I'm okay with it. I have no regrets about the path I have chosen." (Also Read: Shahid Kapoor Comments On Baby Misha Kapoor's New Hair Colour, And It's Funny Beyond Words)

Stay tuned with us for updates about this little munchkin!