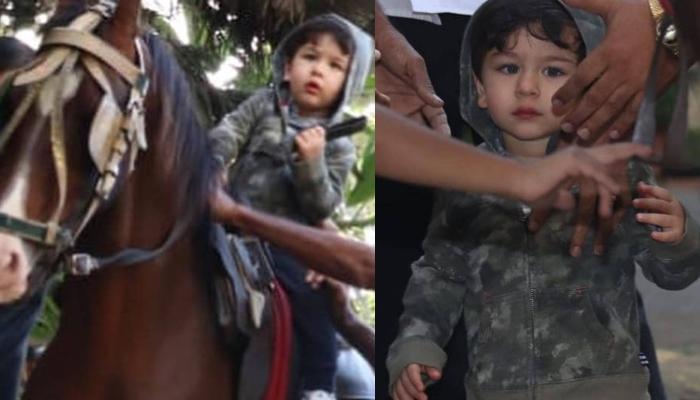 If there were any best baby awards in the tinsel town, Kareena Kapoor Khan and Saif Ali Khan’s son, Taimur Ali Khan, have won it without any second thoughts. Ever since the little munchkin is born, he has been making headlines whenever he steps out. The entire world has gone gaga over little Tim as he likes us to call him, thanks to his paparazzi friends. (Recommend Read: Palak Jain Makes For A Beautiful Bride-To-Be In Her Haldi-Mehendi, Dances Like Crazy At One Function)

While we all know how much Taimur loves a horse, recently, a video of him enjoying the same is making rounds on the internet. In the video, we see baby Tim dedicatedly enjoying the horse ride with swag. He looked adorable in a navy print hoodie with a pair of jeans and white sneakers. Check out the video here:

Taimur has become an obsession for many in India with photographers continuously following him to fan pages dedicated on this wonder boy, looks like he has outlived the popularity of his celeb parents. Recently, Kareena talked about the trolling she went through in her radio show, What Women Wants. She said, “I have to address one thing… recently I got trolled on a photo where I was getting into a private jet… and the trolling was about how apparently, I’m a careless mother who’s letting my kid be brought up by nannies.” (Also Read: Yash And Roohi Johar Cut A Three-Tier Cake With Their Photos Baked Atop It On Their 2nd Birthday)

However, Kareena being Kareena gave a befitting reply to all those who think she is a careless mom, the actress was quoted as saying, “To you judgemental folks who know nothing about my life, please note that there’s a finger I’m showing you in my mind right now.” 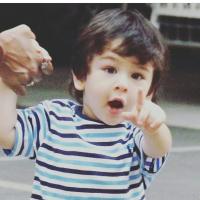 On a lighter note, Kareena also spilled beans about her husband, Saif Ali Khan and his desire to spend all his time with baby Tim. She said, “He's like obsessed. I have to push him out. Woh Bhuj ja rahe the shoot ke liye, and he was like ‘Nahi nahi, cancel the shoot. I can’t go. I can’t leave Taimur’. And I’m like, ‘You have to go. You have to work.’ I have to tell him, I have to be with you also sometimes alone (laughs)”.

In an interview with Vogue India, Kareena talked about all the paparazzi frenzy around her kid, Taimur, and said, “I hate it, but what can we do but ignore it? We (She and husband Saif Ali Khan) both believe that children are a product of their parents and their surroundings, and at home we plan to keep it as normal as possible. That will be his foundation”. (You May Also Like: Chahatt Khanna Wishes Husband Farhan Mirza On 6th Anniversary Even After Separation, For This Reason) 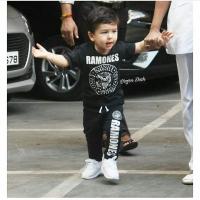 In another interview with Mid-Day, Kareena had revealed that too much paparazzi attention on his little kid scares her. She said, “So much attention on him is scary. The more I think of it, the more I want to put a kaala teeka on him. I don't want him to leave the house. But that's me going overboard. I control my feelings only so that my son can grow up like a regular kid. He deserves to have that chance sans any pressure.” 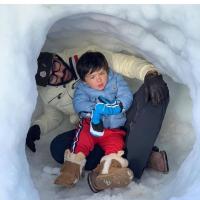 Recently, Saif in an interview talked about Taimur and the unconditional love the entire nation is bestowing upon his little joy of wonder. He stated, “I think the whole country loves Taimur. He's a great energy to have around you. He has quite a happening social life, too. Right now, he is not even home, he's gone for his evening time out with friends! He's very busy." He further talked about the constant media glare, he said, “Taimur should be freely able to take his evening outing in the park. It becomes difficult in certain situations, but the photographers are really friendly. They are just doing their jobs and they don’t push him or his nanny, which is really kind. They aren’t aggressive so I’m happy.” In another interview, Saif had stated, “Maybe I'll send him to a boarding school when he is 13. I don't know, growing up as a star kid, going to the schools of Bandra and Juhu. He needs to see the world.” (Don't Miss: Neeti Mohan Had A Photoshoot With Mohan Sisters At Her Bachelorette Bash, Look Beautiful In Ethnic)

Well, isn't Taimur looking like a nawab riding the horse?