Well, in case you missed royalty for some time, Taimur Ali Khan, Saif Ali Khan and Kareena Kapoor Khan are back again to spread magic all over! Checkout their latest picture.

Ever since we have seen a glimpse of Taimur Ali Khan, he has given many out there some major #BabyGoals (if such a hashtag exists at all!). During those late-night girl sessions, we often find ourselves asking, “What can we do to have a baby like Taimur?” Such is his fan following that Taimur cookies are served at events and paparazzi never gets tired of clicking the little patootie’s pictures! And why would they? We are talking about Taimur Ali Khan after all! (Do Read: Mahhi Vij's Post Of Jay Bhanushali Adoring Daughters, Khushi And Tara Shows What 'Love' Looks Like)

Every picture posted of Taimur Ali Khan, either alone or with his star family, gets viral on the internet like how! In fact, it was just a few days back when Taimur and his star mommy, Kareena Kapoor Khan were spotted at the airport, twinning in cowboy boots. While Taimur’s “I love mom” t-shirt was adorable but this time around, we do have to admit what a stylista this hardly three-year-old already is! In case you can’t follow the picture, here it is for your reference:

Well, in case you missed royalty for some time, the Khan trio is back again to spread magic all over! A fan recently posed with the family as they were enjoying their ‘us’ time together. The picture had Saif Ali Khan, Kareena Kapoor Khan and Taimur Ali Khan sitting at a restaurant. As the picture was being clicked, it was hilariously adorable noticing little Taimur, who couldn’t let go off his drink! As simple as they could get, Taimur was seen donned in white while his abba, Saif looked awesome in pink. And needless to say, Kareena looked a million dollars in a white and green vertically chequered shirt as a fan stood by her husband to click a picture. 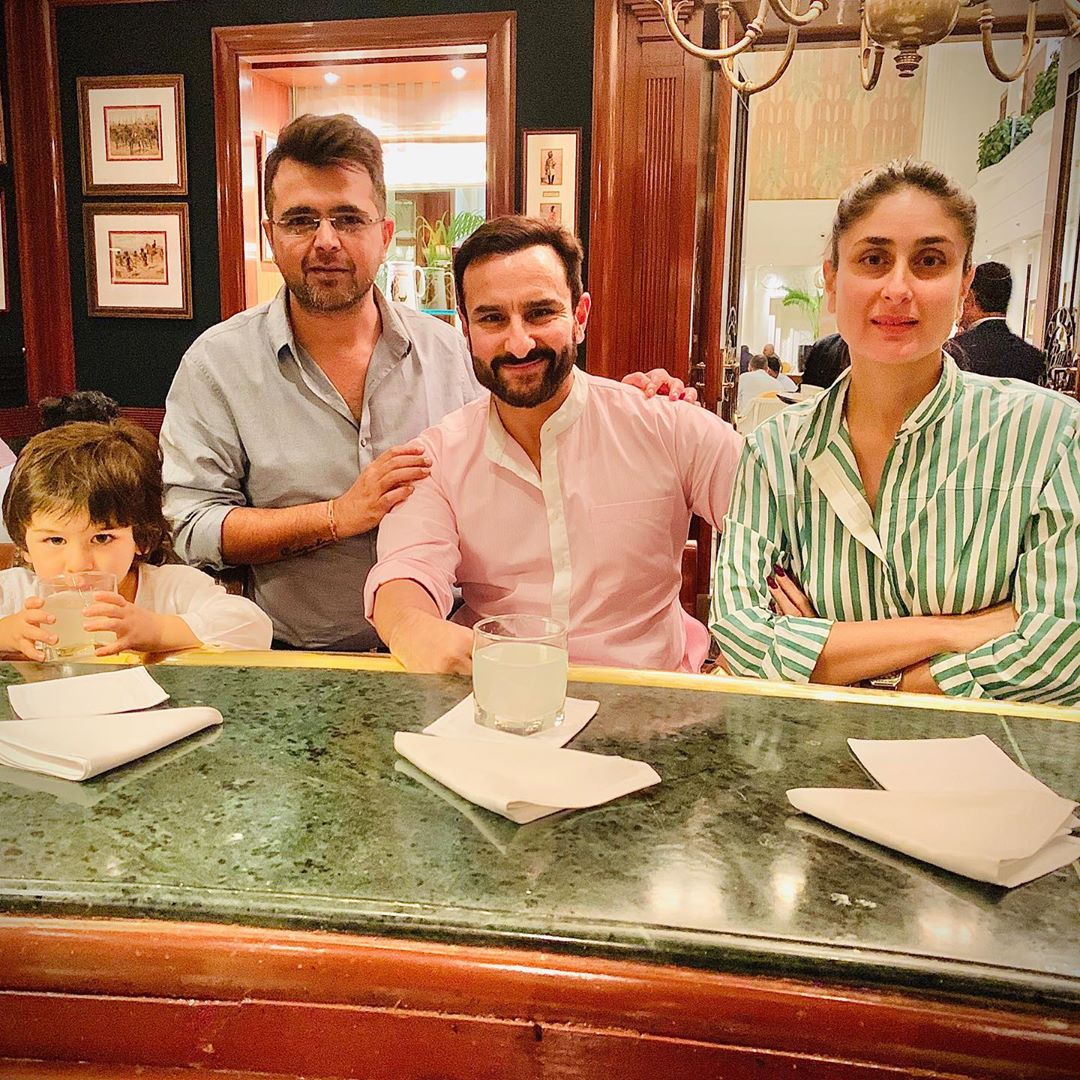 We all had celebrated Diwali on October 27, 2019, and the feeling is somewhere still there in our hearts! Hence, sharing a little throwback about Diwali celebrations and Taimur Ali Khan. Choti Diwali began for Taimur by celebrating with his half-siblings, Sara Ali Khan, Ibrahim Ali Khan and his superstar parents, Saif Ali Khan and Kareena Kapoor Khan. His cheeky poses with his parents and half-siblings had made us go gaga over the little patootie! Sara had taken to Instagram and had treated all her fans with glimpses from the same. (Must Read: Mandira Bedi Wants To Become A Mother Again, Reveals Her Wish Of Adopting A Baby Girl) On the morning of Diwali, an array of shutterbugs had lined outside Karisma Kapoor’s house as Taimur Ali Khan and his superstar mommy, Kareena Kapoor Khan had made their entry and posed outside her residence. Saif Ali Khan had joined the two sweetness’s together and we can definitely call it ‘partial three-ning’ (a self-invented word indeed!), as the trio had looked absolutely stunning in faintly red-hued traditional wears. While their Diwali morning’s family picture was mesmerising, it was spotting little Tim with boxes of phooljhari in his hand and refusing to stop posing in front of the camera, while his superstar mom had constantly requested him to do so was what had made the entire scenario so cute and hilarious!

While that was all about their Diwali morning, little did we know that oozes of royalty had awaited us in the evening from the Ali Khan family. Kareena Kapoor Khan, Saif Ali Khan and Taimur Ali Khan had posed for a perfect family picture for an array of top-notch celeb parties that they had to attend. The trio was donned in their traditional bests for Diwali in the evening and one look at their picture will make you skip your heartbeat for a nanosecond! 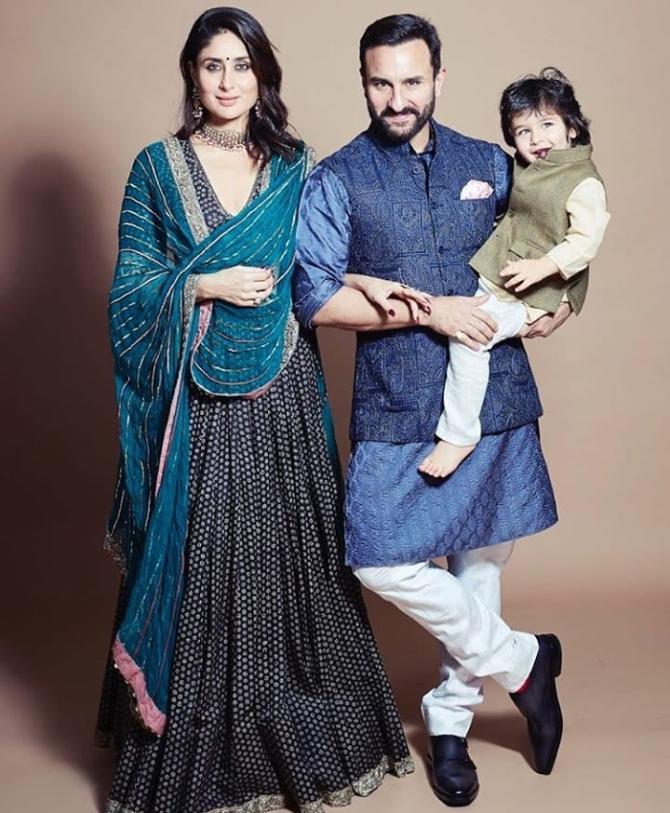 Taimur Ali Khan is one of the most loved star babies on the internet and has totally surpassed his star family’s stardom! He is often clicked during his daily activities which sometimes worry his parents, Kareena Kapoor Khan and Saif Ali Khan. In an interaction with the Filmfare, Kareena Kapoor Khan had shared that she doesn’t like the paparazzi following Taimur all the time. She had said, “I don’t like that at all, neither does Saif. As parents we are scared. I’d want my son to grow up as normally as possible.” Kareena Kapoor Khan had further added, “Saif’s even more particular about this. He wants Taimur to grow up, away from the eye of the paparazzi and the film scenario. Because Saif himself didn’t grow up in a film atmosphere, although his mother was an actress. His father (the late Mansoor Ali Khan Pataudi) as we know, belonged to the cricketing world. But in today’s time, it’s tough. But I do wish he didn’t get photographed as much.” (Also Read: Kareena Kapoor Khan Reveals If She Had Insecurities After Marrying Saif Or Giving Birth To Taimur) 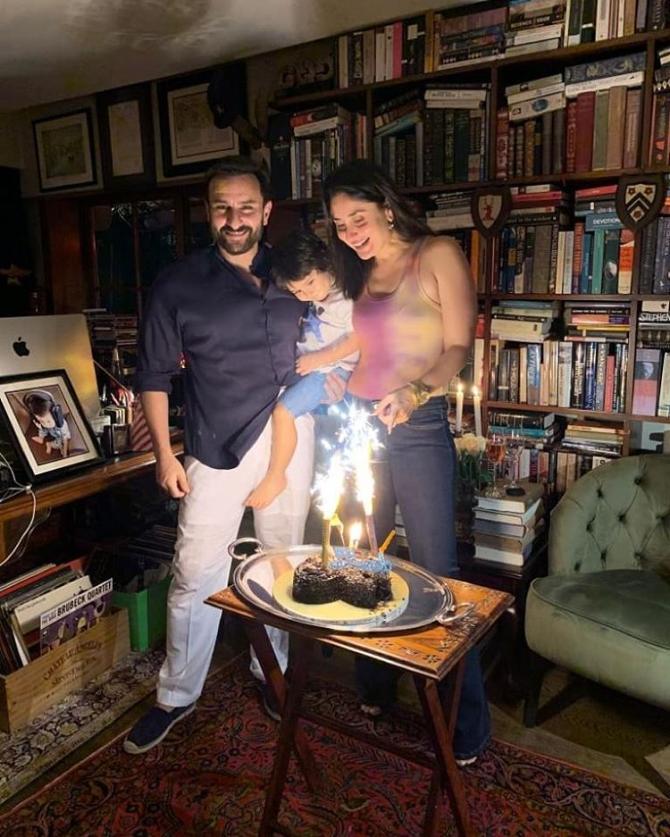 Isn’t Taimur ‘oh-so-adorable’? How did you like their latest picture? Keep us posted! 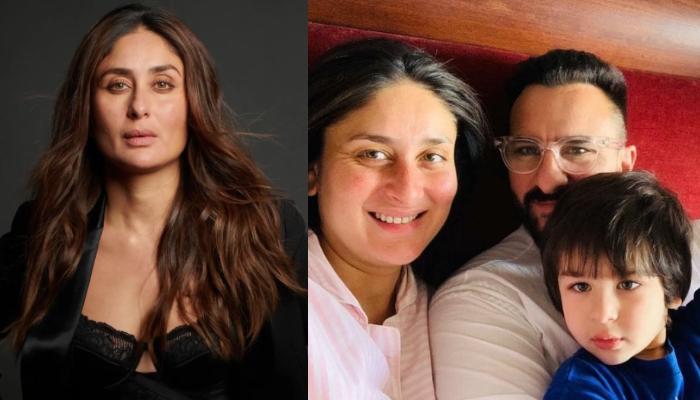 Kareena Kapoor Khan has certainly aced the art of striking a balance in her personal and professional life. As the actress had announced her big Netflix OTT debut a few months back, she makes sure to spend quality time with her dashing husband, Saif Ali Khan and two little munchkins,