Bollywood actress, Sutapa Sikdar revealed a shocking truth about her and late husband-actor, Irrfan Khan's reaction to her second delivery. Find out! Some wounds are so deep and huge that even the greatest healer in this universe, time surrenders itself in front of them. We all have one such wound in our hearts and had received it after the untimely demise of the exceptionally talented actor and a great human being, Irrfan Khan. The actor was last seen in Angrezi Medium and had taken his last breath on April 29, 2020. It was on April 28, 2020, when Irrfan was admitted at the Kokilaben Dhirubhai Ambani Hospital for colon infection and had passed away the very next morning. (Recommended Read: Riddhima Kapoor Wishes 'Awesomeness', Ranbir Kapoor On Birthday With A Collage Of Special Memories)

Since then, his fans and family have been sharing pictures and videos of him to ease the pain of his loss. Now, his wife, Sutapa Sikdar has revealed a huge secret about her second delivery and revealed why she and her husband, Irrfan were massively disappointed at that time in the hospital. Scroll down to find out! 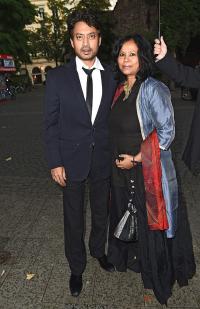 On September 27, 2020, the whole nation had celebrated Daughter's Day and Bollywood actress, Sutapa Sikdar shared an astonishing and unheard story about her second pregnancy. The actress took to her Facebook handle and shared a long note in which she revealed that both she and her late husband and actor, Irrfan Khan were praying for a daughter. However, it wasn't written in their destiny, and it was a baby boy, whom they had named, Ayan Khan. Talking about the day of her delivery, she wrote, "Me and Irrfan wanted to have a daughter so desperately that on my second delivery my doc could not utter the word son and said instead "congratulations!! Healthy child!!". I was disappointed, yes, I was." Going further in her note, Sutapa also talked about the current scenario around a daughter's upbringing in India and wrote, "That day for us and today I feel sad that a girl child got deprived of Irrfan's parenting of a girl. Because just giving freedom is not enough for a girl child. Whatever is happening around makes me say freedom is not about only being vocal it's not about trodding on other's freedom only. Let's get up beyond being voyeuristic beyond the so-called emancipation and do something more concrete meaning full for India." (Don't Miss: Neha Dhupia's Daughter, Mehr Crashes Into Her Photoshoot Session, Mommy Tries To Cover Her Face) 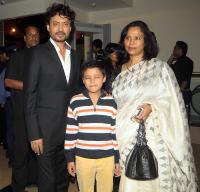 Since Irrfan Khan's demise, Sutapa Sikdar had posted many pictures from their family time together on her various social media handles. For instance, on June 4, 2020, Sutapa had taken to her Facebook account and had posted a couple of throwback pictures of her husband, Irrfan Khan. Alongside it, she had written an emotional note that could be read as "Thank you soooo much I hear you ...yes I know it's from you to me and it touched my body and soul... Between the two realms, we have rain connecting us." Check it out below:

After the demise of Irrfan Khan, his wife, Sutapa Sikdar had written a note for him, which she had shared through the latter's personal Twitter handle. The doting wife had captioned the note as "From Sutapa, Babil and Ayaan." And, a little excerpt from her eulogy could be read as "How can I write this as a family statement when the whole world is taking it as a personal loss? How can I begin to feel alone when millions are grieving with us at the moment? I want to assure everyone that this is not a loss, it is a gain. It's a gain of the things he taught us, and now we shall finally begin to truly implement it and evolve. Yet I want to try to fill in the things that people don't already know." (Also Read: Irrfan Khan's Son Babil Remembers His 'Baba', Says He Would Give Every Cell To Remember His Skin) 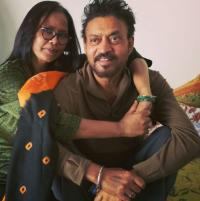 What are your views on Sutapa's revelation about having a daughter? Let us know!

Even to this very day, it still feels unreal but Irrfan Khan, who was last seen in Angrezi Medium, had taken his last breath on April 29, 2020, and is no longer with us. No words can ease the pain of the loss of such an incredible artist and human