Sushmita Sen shared an adorable childhood picture of her not-so-little-anymore daughter, Renee, who gave her the joy of motherhood. 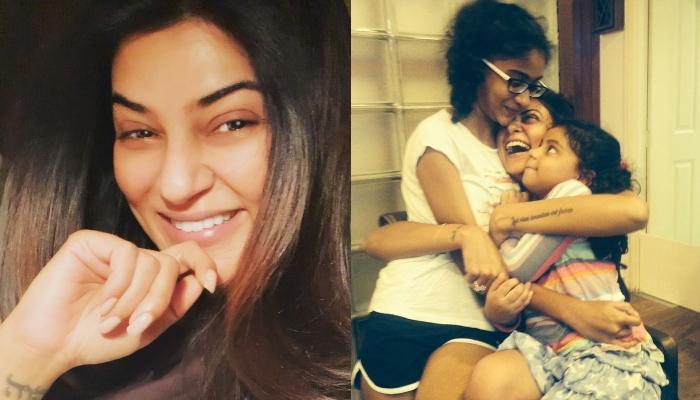 A mom is a mom, no matter whether she has given birth to her little one or has adopted them. Motherhood doesn't differentiate and child only knows the language of love and nothing else. And Bollywood actress, Sushmita Sen has proved it right when she had decided to adopt a baby girl at the mere age of 24 and later by adopting a second baby girl. In all her media interactions, Sushmita had always shared that motherhood turned her into a better person. (Recommend Read: Sushant Singh Rajput's Sister, Shweta Bids Final Adieu To Her Brother, Shares Photo From Prayer Meet)

We remember in an interview with the IANS, Sushmita had shared that people thought that it was a great act of charity. But for the actress, it was an act of self-preservation. She had protected herself by embracing motherhood and it stabilised her life. And one look at gorgeous diva's Instagram feed and we all will agree that her daughters define her journey. We can see sparks in the eyes of her little angels.

On June 29, 2020, Sushmita took to her Instagram handle and penned a note for her elder daughter, Renee. She posted a childhood picture with Renee and captioned it as "Sometimes I look at these pictures & wonder, when I see Renee & me even at age 2 yrs & 26yrs old...the child was always me! It’s magical to realise I am the one who’s been mothered all along! I love you guys!" Check it out below:

Last year, at an event in Hyderabad, Sushmita had talked about embracing motherhood and had stated, "In the natural birth, the mother and the child connect through the umbilical cord but in adoption, the mother and the child are connected by this higher power, a connection that you cannot cut off. I have had the privilege of experiencing it twice. To become a mother who has given birth from the heart. I have not missed a day of feeling the joy of motherhood."  (Also Read: Smriti Khanna Reveals The Only Feature That She Thinks Her Daughter, Anayka Has Taken From Her)

Sushmita had once penned a loving note for her first-born, Renee. She had posted a picture with her and had written, "The first one to ever call me Maa... A long and tough labour before she was born from my heart! Happy birthday, Renee shona. We are 20! What a journey it has been... And how many more exciting adventures await! Embrace them all and always remember Alisah and Maa love you like crazy! You are my destiny. Enjoy my first love... All our kisses and blessings. I love you, Maa and Alisah." (Don't Miss: Esha Deol Posts Unseen Photo Of Brother, Abhay Deol Performing Rituals At Her Wedding On Anniversary)

Well, we love the childhood picture of Renee!