Bollywood actress and former Miss Universe, Susmita Sen praising her little daughter, Alisah Sen in this adorable video is every mother ever. Take a look!

Children are their parents’ pride since the very day of their birth. And once they enter into the rat race of this world and start achieving their goals after goals, only their parents know, how proud they feel of their children in those moments. One such parent is Bollywood actress Sushmita Sen, whose darling daughters, Renee Sen and Alisah Sen have made their mom proud ample of times. Whether it is Renee’s singing skills or Alisah’s confidence when she recites a Marathi poem, one look at Sushmita and that broad shining smile with happy tears in her eyes proves it all. (Recommended Read: Kunal Kemmu Lifts His Little Daughter, Inaaya In His Arms And Her Wide Smile Will Melt Your Heart)

While today Sushmita is proud of her daughters, the former Miss Universe had taken a bold step when she was only 25 in the year 2000 by adopting her elder baby girl, Renee and ten years later, in 2010, she had adopted another baby girl and named her Alisah Sen. Time and time again, we have seen Sushmita sharing pictures, videos, boomerangs, and a lot of other things about her two daughters on her Instagram handle. Recently, the actress has posted an adorable video of her younger daughter, Alisah Sen on Instagram and the whole internet is drooling over their impeccable bond. 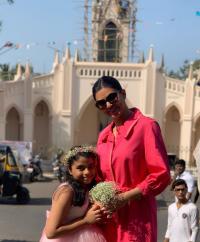 On February 22, 2020, Susmita Sen took to her Instagram handle and has posted a small video in which we can see her younger daughter, Alisah speaking the Marathi language. The actress wrote a long caption in praise of her daughter that can be read as “I could eat her up!!! My all heart #linguist @pritam_shikhare for helping her with her pronunciation!! Children make every language sound like love...the way it should be spoken!!! So proud of you Alisah shona!!! #sharing #schoolwork #marathi #love.” Take a look. (Don't Miss: Raveena Tandon Wishes Hubby, Anil Thadani On 16th Wedding Anniversary With A Heart-Melting Collage)

This isn’t the first time, when Sushmita Sen had showered her immense love on her daughter, Alisah as on August 28, 2018, which was Alisah’s 9th birthday. Her loving mother had the sweetest birthday message for her daughter. Sharing a cute picture on her Instagram handle, Sushmita had written, “Happpyyyyyyy Birthday love of my life!!! Thank you for being such a #gift in our lives & for being the #rooh of my existence!!! what a divine #soul you are my Alisah maa!!! To your health, happiness & unshakable strength of goodness, your Renée didi & I are blessed to turn 9years old with you today!! To know you is to know #godslove in action!!! And to be YOUR mother is to know God’s kindest blessing!! We love you Shona!!! Keep smiling & growing, what a magical life awaits!!! Dugga Dugga”. 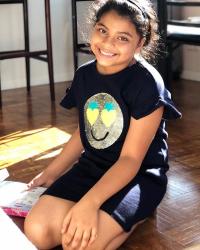 Later, the stunner, Sushmita had also posted a thank you message from Alisah, which could be read as, “Msg from Alisah “ Thank you so much for all the birthday wishes & blessings, Maa read me the msgs on Instagram & they made me feel very very special on my birthday” with love & pronams, Alisah (and needless to say her #Maa LOVES YOU GUYS!)”. 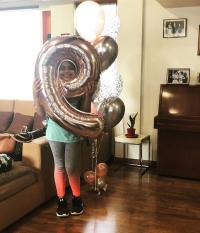 On September 24, 2019, Sushmita Sen had taken to her official Instagram handle and had shared a heart-warming post. Revealing that everyone says Renee looks like her and how Alisah reacts to it, Sushmita wrote a long caption that can be read as “This smile!!!! Alisah often hears & reads comments of some people saying, ‘Renee looks so much like me’ to which she says, yes, Renee didi may look like mamma but I am more like her!!! very very true Alisah Shona you’re not only like me, but you’re also BETTER!! Incredible how a confident & gracious young soul can possess such wisdom, such that it has the power to transform, mindless insensitive chatter into a constructive, positive truth!! I couldn’t be prouder!!! #inspired Learning from my #daughter #duggadugga I love you guys!!!!” Here are the pictures that she shared along with the post to prove the same. (Also Read: Shilpa Shetty Revealed That She And Hubby, Raj Kundra Were Trying For A Second Child For Five Years)

Do you find Alisah adorable in this video? Let us know.