'Malang' star, Kunal Kemmu shares a beautiful picture of him playing with his daughter, Inaaya on Instagram and we have to say he's a 'super dad'. Take a look!

Marriage is an alliance you happily sign into in front of the entire world. It is like giving the other person the key to your happiness and you know they are going to safeguard it for the rest of their life. Every day turns into a new adventure of understanding each other and valuing the differences. And Bollywood couple, Soha Ali Khan and Kunal Kemmu's relationship is an inspiration for the millennials. The duo had met each other in 2009 when they had signed a film, Dhoondte Reh Jaaoge, and in that point of time, they didn't even think they would become friends. (Recommended Read: Raveena Tandon Wishes Hubby, Anil Thadani On 16th Wedding Anniversary With A Heart-Melting Collage)

However, at the moment, celebrity babies are the one, who are ruling the internet. The little toddlers with their abundant cuteness are more in headlines than their star parents. Kunal Kemmu and Soha Ali Khan have given this industry one of the cutest babies. They were blessed with a cute baby girl on September 29, 2017. Two days later, the proud and elated parents named her Inaaya. Since then, their Instagram handles are filled with Inaaya’s adorable pictures and cute videos. Both Kunal and Soha try their best to spend as much time as possible with their little daughter. Recently, Inaaya’s super dad, Kunal Kemmu posted an adorable picture with his daughter on his Instagram handle but it’s the picture’s caption that is making it viral on the internet. 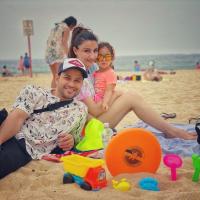 On February 22, 2020, Malang actor, Kunal Kemmu took to his Instagram handle and posted a beautiful picture with his little bundle of happiness, Inaaya. In the picture, we can see Inaaya looking like a little princess in her white dress and her super dad, Kunal looking dapper with a grey tee and a cap. However, it’s the heart-melting caption written by Kunal that is getting all the attention and applause. His caption can be read as “I got the whole world in my hands.” Take a look. (Don't Miss: Shilpa Shetty Revealed That She And Hubby, Raj Kundra Were Trying For A Second Child For Five Years) Don't they look adorable? However, in an interview with the DNA, Kunal had shared the story behind his baby girl's name and had stated, "It’s weird. It just came to me. When you know you are having a baby, the first thing is you think about the names you can call your baby. Everyone goes through this and we also had a list. Inaaya just happened to strike me. I had never heard the name before but I must have had some connection with it and everyone quite liked the name. But it was one of the names I had chosen. Naumi was another name that I liked. And my daughter has a middle name too. We were going with Inaaya but then, she was born on Mahanavami, so this was too much of a coincidence. Even though she will always be known as Inaaya, her official name will be Inaaya Naumi Kemmu." Talking about Soha Ali Khan and Kunal Keemu’s relationship, their initial reaction to each other was more of indifference than even a simple friendship. But, as destiny had some other plans for them, the two were in love in no time. Very soon, they even moved in together and were in a live-in relationship before they decided to take the wedding vows. No wonder, you’ll want to know, who proposed first? Well, Kunal popped the question to his sweetheart in 2014, in the romantic locales of Paris, to which the demure Soha said a prompt yes! Soha even shared this news through her Twitter profile, where she mentioned, “It gives me great happiness to share with you all that Kunal proposed to me in Paris with the most perfect ring in the world and I said yes.” (Also Read: 'Indian Idol 11' Judge, Neha Kakkar Reveals That Aditya Narayan Is Going To Get Married This Year) 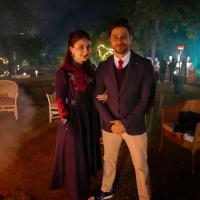 Do you love, Kunal’s caption for his little daughter, Inaaya? Let us know.

It is a scary time for the entire world as everyone is fighting a war against the highly contagious virus, COVID-19. The world has paused and the health crisis has turned into a global recession. We are in a 21-day lockdown and it seems like ages we have stepped out of