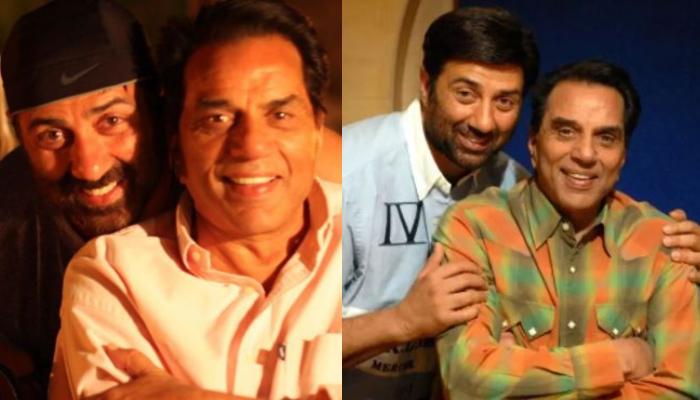 There's no doubt that the Deols have ruled the Bollywood industry in different periods and talking about the future, the responsibility of taking their legacy forward is now on the shoulders of Sunny Deol's son, Karan Deol. The youngster had made his debut in the film, Pal Pal Dil Ke Paas, which was directed by none other than his father, Sunny Deol. On October 19, 2020, Karan's father, Sunny Deol, celebrated his 64th birthday with his sons, brother, father, and some family relatives. (Recommended Read: Sanjay Dutt Beats Cancer? Family member Clarifies Reports Of 'Having A few Months To Live' [Details])

For the uninitiated, veteran actor, Dharmendra ji has two wives, and he has showered equal love on all his kids throughout his life. Sunny Deol, being the eldest son of Dharam ji, sharesan extraordinary bond with him, and on his birthday, we witnessed enough proofs of the same.

On October 20, 2020, veteran actor, Dharmendra took to his Instagram handle and shared some adorable pictures from his son and actor, Sunny Deol's 64th birthday celebrations at home amid COVID-19 outbreak. In the pictures, we can see a beautiful candid photo of the father-son duo. At the same time, the second one is an adorable picture of Sunny and Bobby, and the third picture is without a doubt the cutest of all as we can see Karan and Rajvir giving a peck of love to their father. Along with these pictures, Dharmendra ji wrote, "With his great blessings We celebrated Sunny's BIRTHDAY Deol Style ....need your good wishes." Take a look: (Don't Miss: Teejay Sidhu Radiates Pregnancy Glow As She Helps Her Twins Cut Their 4th Birthday Cake) 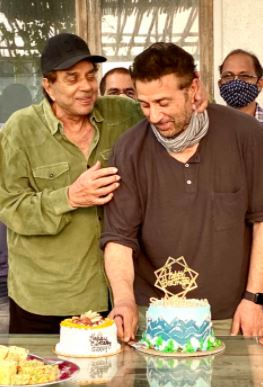 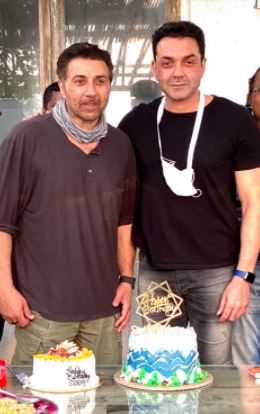 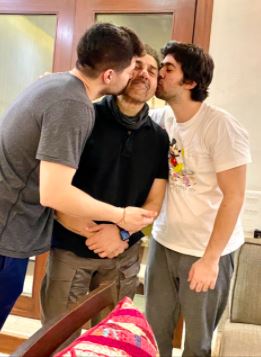 The doting father also took to his Twitter handle and shared the same pictures and caption. However, he also shared a beautiful candid picture with his son, Sunny in which the daddy cool can be seen feeding his son with a spoonful of cake. The adorable picture tells everything about the bond that Dharmendra ji shares with his sons. Along with this picture, the legendary actor wrote, "Love you all, for your loving response..... your good wishes on Sunny's Birthday Friends, you are always close to our heart ..........Khushi mein.....aai to intiha ho gai tweets ki......bore ho gaiye hoon ge aap......Ab kuchh din chup rahon ga" in his tweet. Take a look: 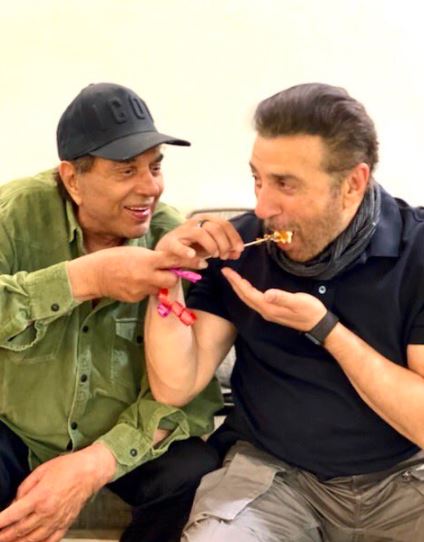 The birthday boy, Sunny Deol also took to his Instagram handle and shared a picture with his beautifully decorated sky and mountains themed-cake and atop it we see the birthday plaque, and it can be read as "Sunny Bhaiya". Along with this picture, Sunny thanked his fans, followers, family, and industry-mates for their warm wishes and wrote, "Love you all for all the love you give me." Sunny's step-sister, Esha Deol also commented on his picture, and her comment can be read as "Happy Birthday Bhaiya." (Also Read: Divya Agarwal Shares Her Beau, Varun Sood's 'Waking Up' Face, The Duo Looks Cute Posing For A Selfie) 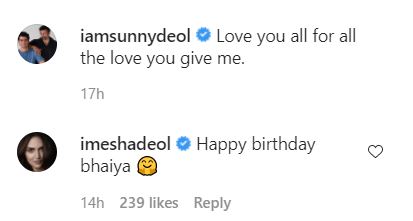