Karanvir Bohra and Teejay Sidhu are enjoying their parenthood journey. Check out pictures of their twin daughters' 4th birthday celebration!

For parents, there is no greater joy than to see their kids turn into beautiful human being. It is said that babies are like flowers, they bloom when you least expect and turn your world into a paradise with scattered toys, noises and big tantrums. Once the first year is over, your baby will start growing up and you won't even realise and they will be ready for their jobs. However, television couple, Karanvir Bohra and Teejay Sidhu are enjoying every second of nurturing their baby girls, Bella and Vienna. (Recommend Read: Ankita Bhargava Talks About Postpartum Depression, Reveals How Being Creative Had Helped Her [Video])

It was on October 19, 2016, when Karanvir Bohra and Teejay Sidhu had welcomed their twin fairies, whom they have lovingly named, 'Bella and Vienna'. Since then their life has changed for the better. And soon the family of four is going to turn five with the arrival of a new member. Yes, Teejay is pregnant for the second time and she is enjoying her pregnancy phase. 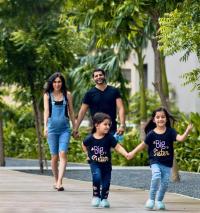 On October 19, 2020, Karanvir and Teejay's daughters, Bella and Vienna celebrated their fourth birthday. And we got hold of their birthday celebration pictures, wherein we can see the entire family donning pastel outfits. The little girls were dressed in matching pink dresses, while daddy, Karanvir looked handsome in a pink t-shirt. However, Teejay won our hearts as she donned pastel-striped dress and flaunted her baby bump. Check out the pictures their celebration below: 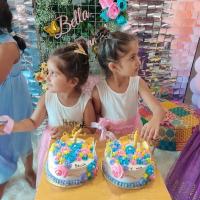 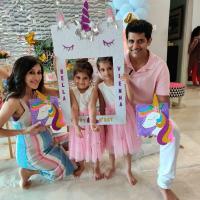 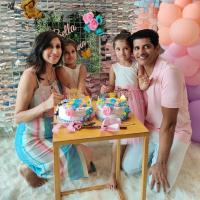 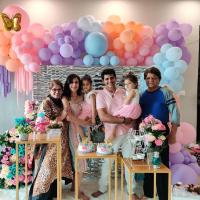 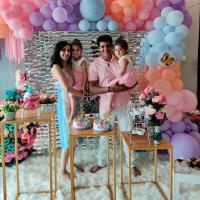 Karanvir had penned a sweet note for his little girls. He had taken to his IG handle and had shared a video, in which he and Teejay could be seen singing and wishing their daughters at midnight. Along with the video, Karanvir had written, "Wish you a very happy birthday my princesses @twinbabydiaries unbelievable how these 2 just got up for us to sing them and wish them #happybirthday. They still think their birthday is going to be in the morning." (Also Read: Kapil Sharma Admits Wearing His Wife, Ginni Chatrath's Nighty At Home On His Chat Show [Watch Now])

Teejay had also shared a picture and had written an adorable note for her angels. It could be read as "Their 'twins' timing is impeccable!  First one wakes up to use the bathroom. Then just after midnight, the other wakes up to go to the bathroom. But it's okay. Gave us a chance to squeeze them and wish them a #happybirthday! 'But our birthday is coming in the morning, Mom!'. Ok, time to sleep then, #babies!!" (Don't Miss: Bobby Deol Recalls How His Brother, Sunny Deol Went Out Of His Way To Make His Debut Movie A Success)

Well, we love the cute pictures of Bella and Vienna's birthday bash!