There is no denying to the fact that the best doppelgangers of these celebrities are none other than their offspring. ‘It’s all in the genes’ can’t be truer for these celeb kids who are a spitting image of their fathers.

Sure, we love knowing our celebrities, their likes and dislikes, updates about their personal and professional lives; but more than that we love following and gushing over their children. It is rightly said that the apple doesn't fall very far off the tree. And these Bollywood fathers and their sons are a quintessential proof of that as it is all about genes.

There is no denying to the fact that the best doppelgangers of these celebrities are none other than their offspring. ‘It’s all in the genes’ can’t be truer for these celeb kids who are a spitting image of their fathers. The resemblance between them is so astounding that they look eerily similar. The good-looking fathers have indeed passed it down to their sons, and let's face it - genes work. Here’s a list of celeb sons who have grown up to look exactly like their fathers: 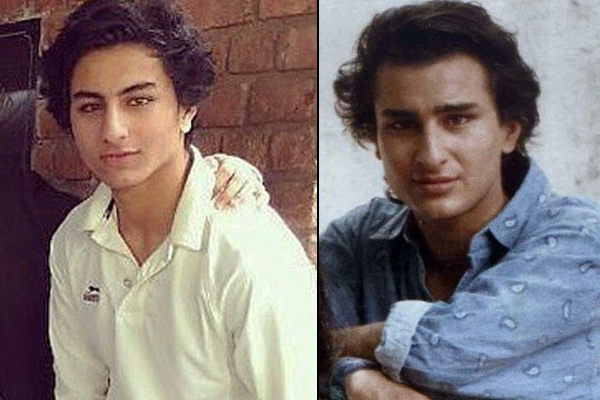 Guys, if you thought only Saif Ali Khan’s younger munchkin, Taimur Ali Khan is an internet sensation, please make way for his elder heart-throb half-brother, Ibrahim Ali Khan. Ibrahim has been in the news lately for his uncanny resemblance with daddy, Saif. Ibrahim is exemplary of royalty meets suave. This young lad is a doppelganger of Saif and with his chiselled body and impressive personality, makes us wonder if it’s Saif or Ibrahim. First as a kid and now as a grown-up, Ibrahim is still the mirror image of his father. Ibrahim will follow his parents, Saif Ali Khan and Amrita Singh, sister, Sara Ali Khan and star Pataudi family, as he aspires to be an actor.

Speaking about the same in an interview, Saif once revealed,

“Yes. Ibrahim, Aarav (Akshay Kumar’s son) and that group of youngsters want six packs and aspire to be Bollywood stars. I don’t know if anyone wants to be an actor. It is kind of disturbing because not everyone makes it. But then what the heck? Talking about being a star, my wife points out that till a few years ago, even I didn’t want to be an actor, I wanted to be a star.” 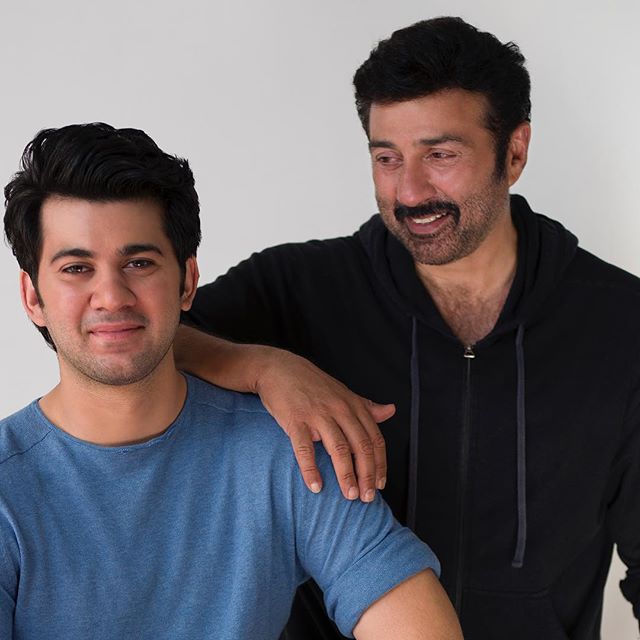 Just like the good looks, charming personality was passed on by Dharmendra to his son, Sunny Deol. It seems Sunny has further passed on to his son, Karan Deol. The grown-up Karan is now all set to follow his father’s footsteps and make his debut in the industry. Sunny is launching his son in his directorial film, Pal Pal Dil Ke Paas. Over three decades after Sunny made his Bollywood debut with Betaab, Karan is ready to make his own identity.

Speaking about his son’s launch in the industry, Sunny was quoted as saying, "When I came in the industry was I mentally prepared? I am sure he is coming in his own way the way I came in. Rest is up to him - how he portrays himself, the subjects he chooses, how he does the job and that is all up to him. As a father, I am always there with him. But I can't go and work for him or select things for him. It is up to us what we become as individuals." 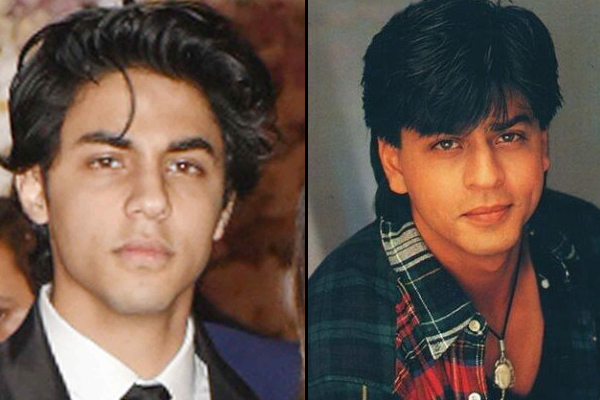 Like father, like son! – this proverb perfectly goes for Shah Rukh Khan and his 20-year-old son, Aryan Khan. Aryan has started looking like his father, Shah Rukh as he is growing up, and looks a mirror image of him despite his dad’s dimples. With the same confident looks, dashing personality and a charming smile to make any girl/woman go weak on her knees, Aryan has grown up to be his father’s carbon copy. And just like Shah Rukh, Aryan too has millions of female fan following before even entering into Bollywood. 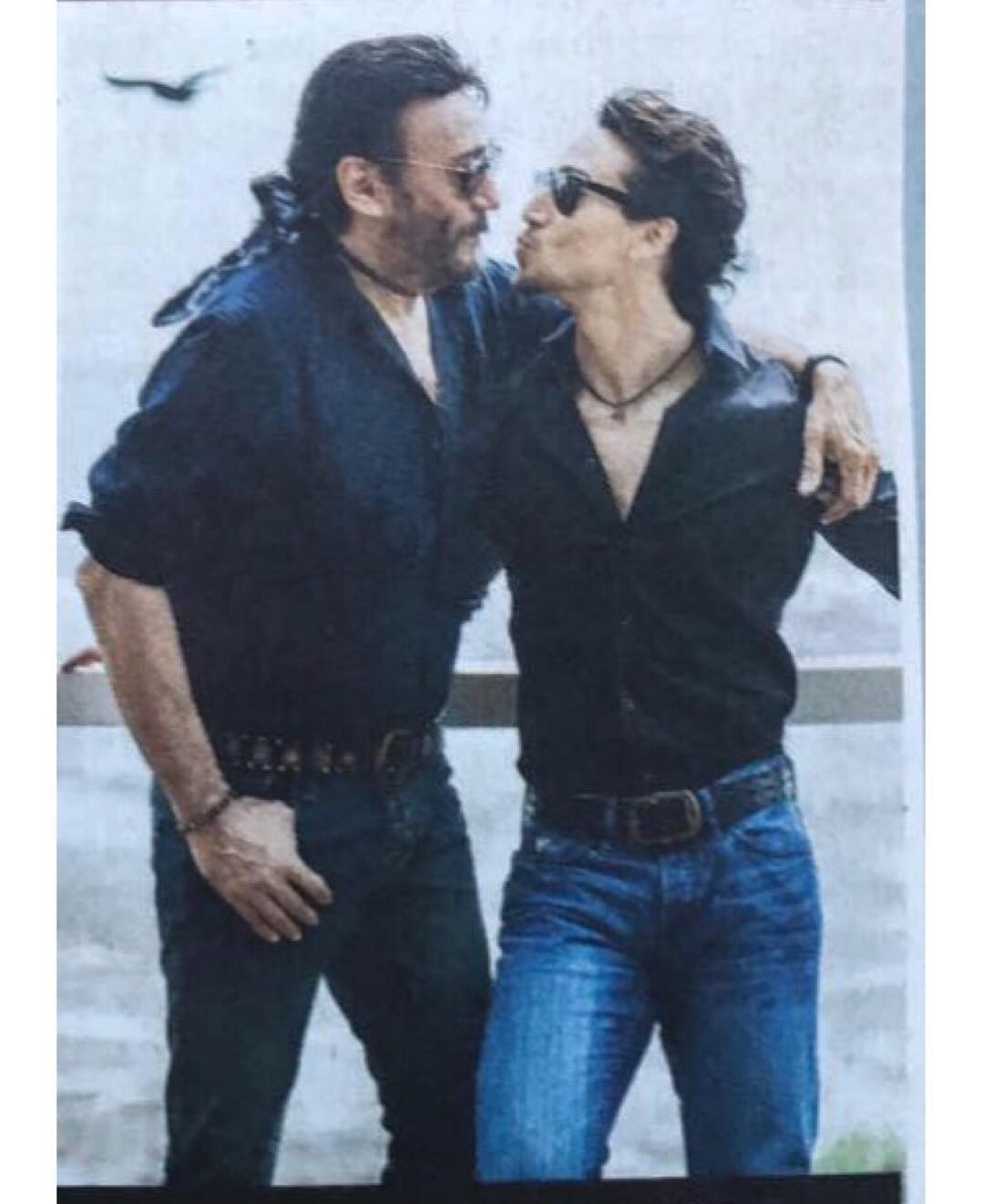 This young guy in the B-town is ruling the hearts of the millennials with his beautiful eyes, washboard abs, cake-cutter jawline and killer dance moves. Wondering where he got his good looks from? Tiger Shroff got his sexiness from his cool dad, Jackie Shroff a.k.a. Jaggu dada. Despite his stardom, Jackie hasn’t forgotten his roots and even his son is as down-to-earth as him. On Father’s Day 2017, Tiger shared the above picture with his dad, Jackie and captioned it, “So lucky to be his son... and so unlucky to try n take his legacy forward. @apnabhidu #bestdad” 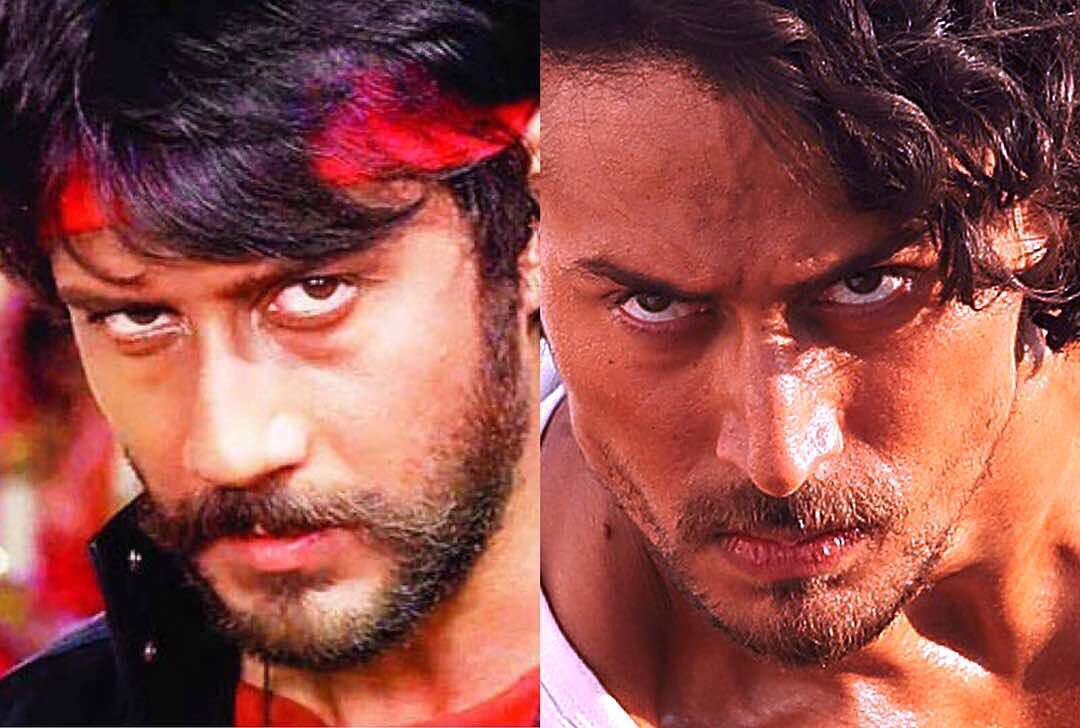 Speaking about being compared to his father, Tiger once shared in an interview, “I didn’t like being compared with my father. There was nothing to compare! I was, and still am shy, gawky and very underconfident around women. My father could charm anyone with just one look. What was I? Not even a chip off the block.” 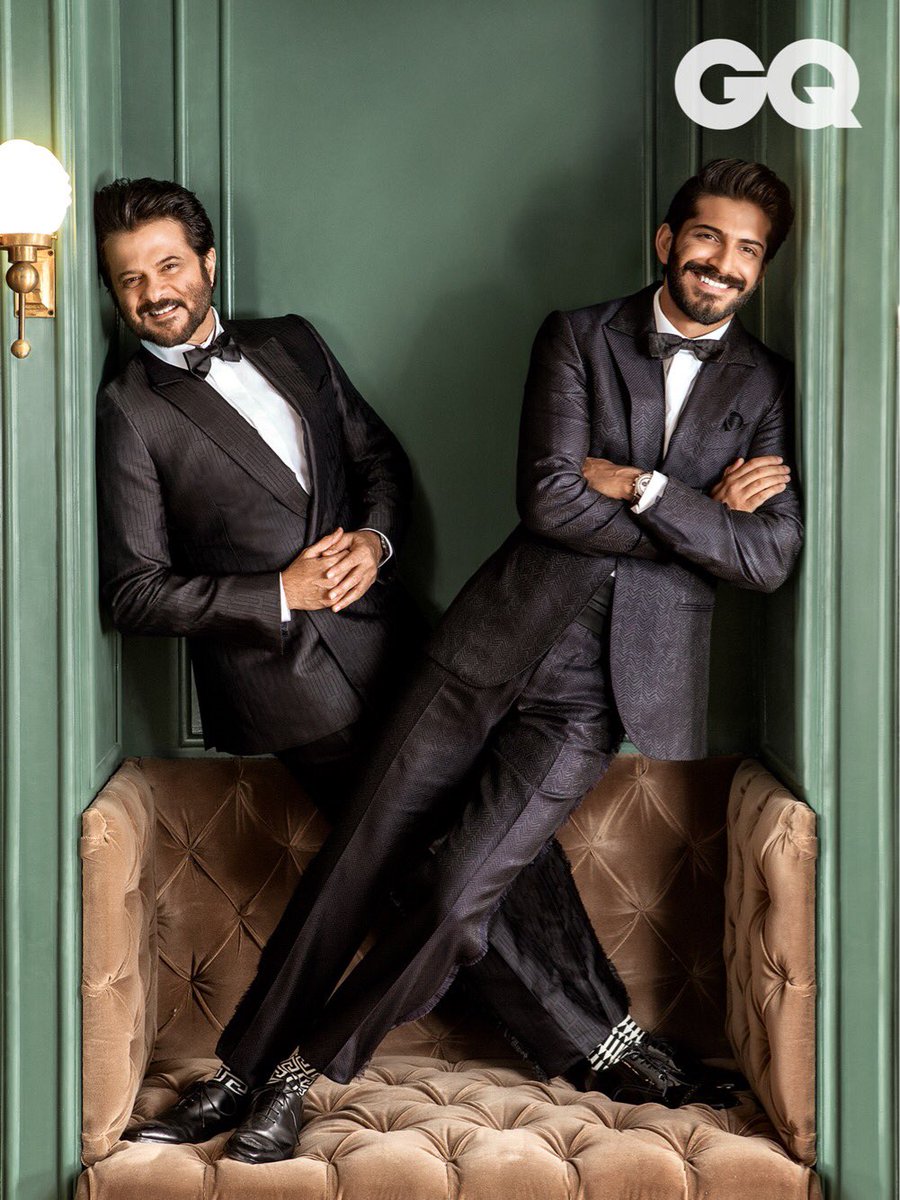 He is one of the newest star-kids in B-town and he can rock the bearded look just like his dad, and we cannot tell them apart. Given that Anil Kapoor is so energetic at the age of 61, he can easily connect with the youngsters, including his children. Despite the ‘man-child and mature young adult’ dynamic between the duo, they have a striking resemblance and their pictures are the proof. And just like the father, Anil Kapoor, son, Harshvardhan Kapoor’s style game is always en pointe. 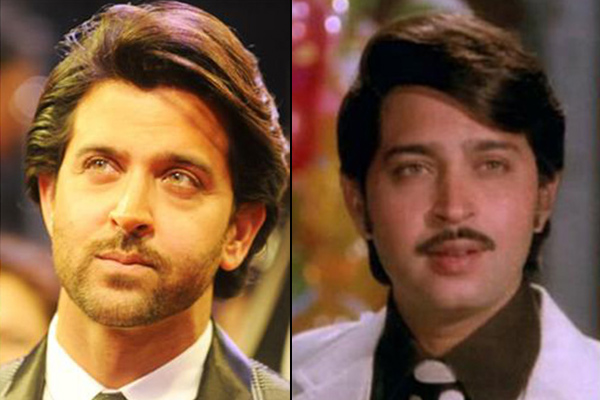 With those glowing complexion, glossy mane, well-etched features and rippling muscles to boot, just add a moustache to Hrithik Roshan’s face and you’ll find yourself staring at his father, Rakesh Roshan. And the sparkling misty hazel eyes cements the uncanny resemblance shared by this famous father-son duo, which is enough to take anyone’s breath away! Don’t you agree, guys? Just like his multi-talented father, Javed Akhtar, Farhan Akhtar too is a multi-talented blessing to the industry. They both have won hearts and created their own niches in the industry and their remarkable work has been an inspiration for many. Despite the similarity of being multi-talented, Javed ji and Farhan resemble each other a lot. Don’t you think so?

(Also Read: Shabana Azmi Proves Her Husband Javed Akhtar And Her Step-Son, Farhan Akhtar Are Two 'Peas In A Pod') 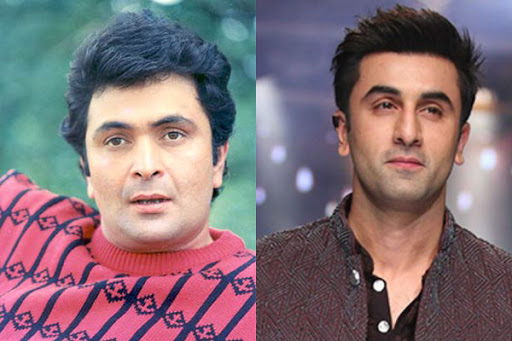 While Rishi Kapoor was the boy-next-door in the 80s, Ranbir Kapoor has always been every girl’s crush. There are so many features of Rishi ji that passed on to his son, Ranbir that we must say, well-done genetics! Don’t you agree, guys? While Sanjay Dutt’s biopic truly defined his unconditional love relationship with his father, Sunil Dutt, he has also been that constant person in Sanju’s life who stood with him through his thick and thin. Sanjay not only got the strength to fight his battles from his father but also got those charming good looks from him.

Speaking about his father, Sanjay was quoted as saying, “Whatever I am today is because of my father. He is my inspiration and I miss him every day. I did not always share an easy relationship with him. But he always stood by me. I wish he was here to see me as a free man and the beautiful family that I have today. He would have been proud.” If not the extraordinary success, Junior Abhishek got the physical attributes of being tall, dark and handsome on point, from his legendary Paa, Amitabh Bachchan. And not only this, there are striking similarities between the three generations of Bachchans. Abhishek shared a collage of Khazan Singh Suri (Amitabh Bachchan’s maternal grandfather), Amitabh Bachchan and himself, and captioned the photo as, “So my father sends me this photo. That’s my great grandfather (my father’s nanaji), dad and yours truly.. 3 generations! #Manmarziyaan #itsinourblood #punjabi”. It's uncanny, isn't it? Like father, like son! Now would you also agree with the saying that the apple doesn’t fall very far off the tree? In case we missed any father-son duo, do let us know in the comments section below.